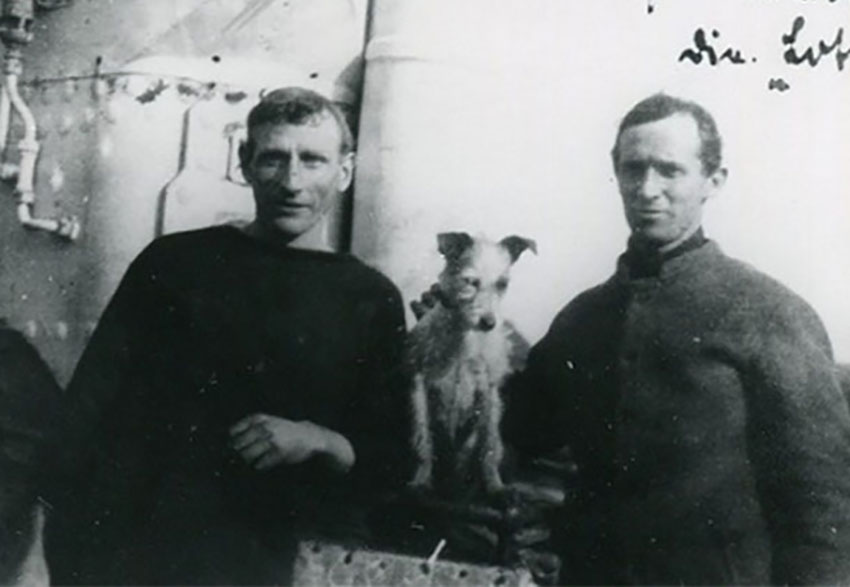 Last December, the U-boat Project shared the amazing story how a small terrier named Lotte came to live among the crew of the German submarine U 91 in the spring of 1918. U 91 under the command of Alfred von Glasenapp was patrolling the Irish Sea when they picked up Lotte from aboard the ETHEL. In the story (more details below) we appealed to anyone who may have some information about Lotte’s fate. The team also contacted the German media in the hope of some leads.

This June, we received an email from a direct descendent of Glasnapp and what he told us was quite remarkable. His email is below in full:

Only yesterday I came across the entry on ‘Lotte and the U91’ on your website and at first didn’t believe my eyes. For I had heard the ‘Lotte’ story many times at home and to see it lifted from family lore into the realm of documented history was truly amazing. I never knew what ship Lotte was from and the exact circumstances of its sinking, but I am very happy to be able to provide a little information on Lotte’s later whereabouts.

Alfred von Glasenapp, Lotte’s rescuer and commander of U 91, was my maternal grandfather, whom I have sadly never met. According to my mother, he kept Lotte on his boat till the end of the war, and after being discharged from the navy, he took her with him to live in Johannisburg (today’s Pisz) in East Prussia. Sometime later, however, he had to leave her with relatives of his. Thus, Lotte became their family dog, and my late father, born in 1918, could still recall having played with her when he was very young. She also had offspring but unfortunately died sometime in the 1920s, probably of rabies. My mother, born in 1924, only knew her from hearsay.

On looking through some of her childhood albums, she found a picture of herself with a small dog who is identified as ‘Lotti’ in the caption below the picture. This dog appears to have been of similar built and colouring as Lotte. However, my mother does not recall the situation as she was only two years old when the picture was taken, but it is entirely possible that Lotte was still alive in 1926.

However, what intrigued me even more about your article was the mention it makes of Glasenapp’s private diary, which I thought was lost forever. According to my mother, when my grandparents were evicted from Silesia in 1946, my grandmother hid these diaries in a haystack (of all places), hoping for a quick return, which of course never materialized. Apparently, the war diaries had been extremely dear to my grandfather, who went as far as having the original manuscript typed up by a professional typist and illustrated it with photos taken aboard his U-boat. Till today, my mother has never ceased to lament the loss of these documents.

To think that, despite all odds, the diary may have somehow survived, appears hard to imagine, and yet I find you quoting from it in black and white. I would be very, very grateful if you could provide me with any information about the present location of the document and whether it is possible to obtain a copy, regardless of the cost. My mother, at 95, would be overjoyed if this testimony of her father’s life were indeed to reappear, miraculously, after more than seven decades.

Dr Rita Singer, Community Engagement Officer comments, ‘The story of Lotte and the missing diaries has been an incredible one, and illustrates the very real connection that many of us have to events which seem so long ago.’

Not only do we now have a complete story for Lotte’, we have also shared information on the whereabouts of the extant diaries with Glasenapp’s grandson and also some of the images taken on board U 91 during the spring when Lotte came to live on board a German submarine.

We would like to thank Glasenapp’s descendants, once more for sharing the rest of Lotte’s story with us and giving us permission to publish his email on our blog. After seventy years of believing their grandfather’s and father’s private diaries entirely lost, we hope they are happy to close some of the gaps in their family history.

BACKGROUND TO THE STORY

U 91 under the command of Alfred von Glasenapp was patrolling the Irish Sea. During the first week of their patrol, U 91 spent most of the time hiding from convoys or never getting close enough to a merchant vessel to initiate an attack.

By their second week at sea, however, things began to change and on 26 April, U 91 encountered the small wooden schooner ETHEL transporting a load of Welsh coal from Cardiff to New Ross. In the haste of abandoning their unarmed vessel, the crew forgot their ship’s dog which was promptly rescued by the German submariners and taken aboard U 91 before they scuttled the ETHEL. Alfred von Glasenapp adopted the terrier and named her ‘Lotte’. To everyone’s delight, she quickly settled into life on an active submarine.

In one picture, she can be seen between two prisoners of war that U 91 had taken during this particular spring campaign. In his private diary, Glasenapp also mentions that Lotte enjoyed herself lounging in the sun between the submariners tanning themselves on deck during calm moments at sea. In another picture, taken at a German submarine base in summer 1918, she is surrounded by the entire crew of U 91.