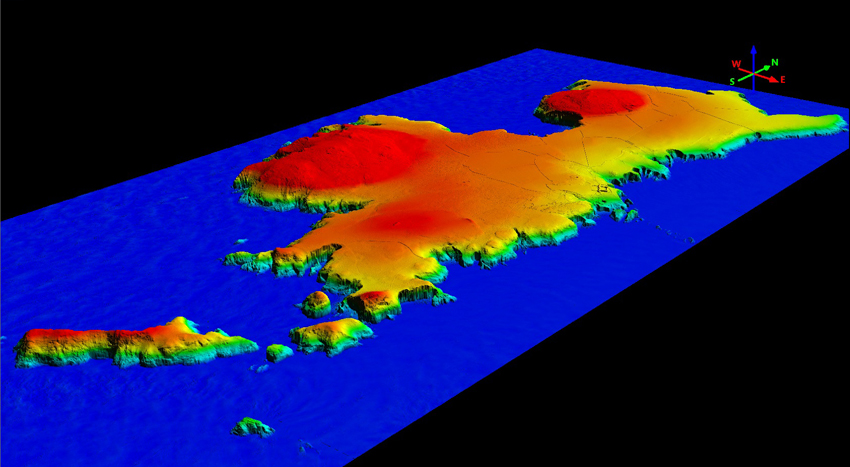 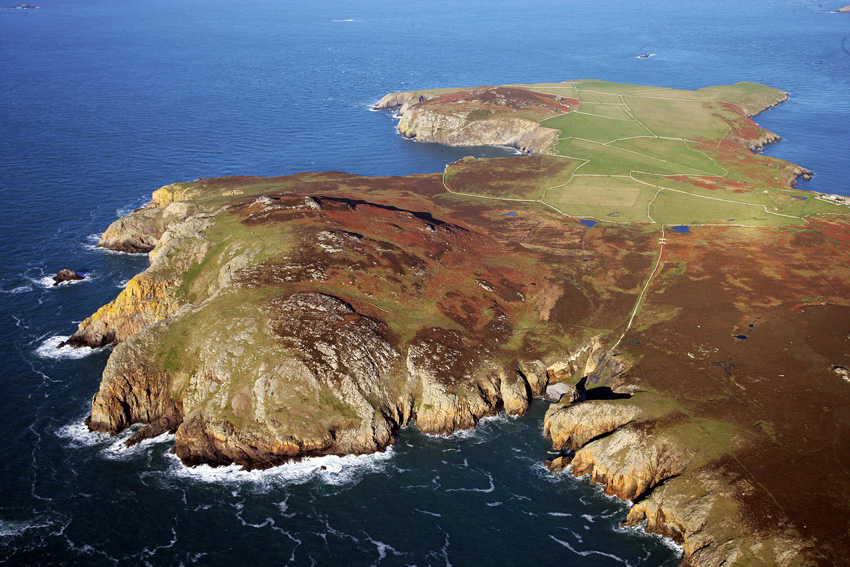 A new airborne laser survey of RSPB Ramsey Island has revealed a hidden archaeological landscape thought to date back 4,500 years to the Bronze Age, changing our understanding of how this isolated Pembrokeshire island was settled while providing a powerful new management tool for the RSPB.

The airborne laser survey was commissioned by archaeologists from the Royal Commission on the Ancient and Historical Monuments of Wales as part of the new European-funded Ireland-Wales CHERISH project investigating climate change and coastal heritage. The data captured during the survey has enabled the creation of a highly detailed 3D model of Ramsey Island for the first time. Not only has this led to the discovery of new archaeological sites but it also provides an accurate and precise dataset which can be used to monitor environmental changes on the island as a result of climate change. The CHERISH Project is funded through the EU’s Ireland Wales Co-Operation Programme 2014-20.

The new survey has revealed exciting sites such as Bronze Age round barrows, a prehistoric coastal promontory fort, the possible site of a lost chapel and a multitude of ancient field systems. These discoveries are forcing archaeologists to change their interpretation of how humans would have interacted with Ramsey Island during the last 4,000-5,000 years. 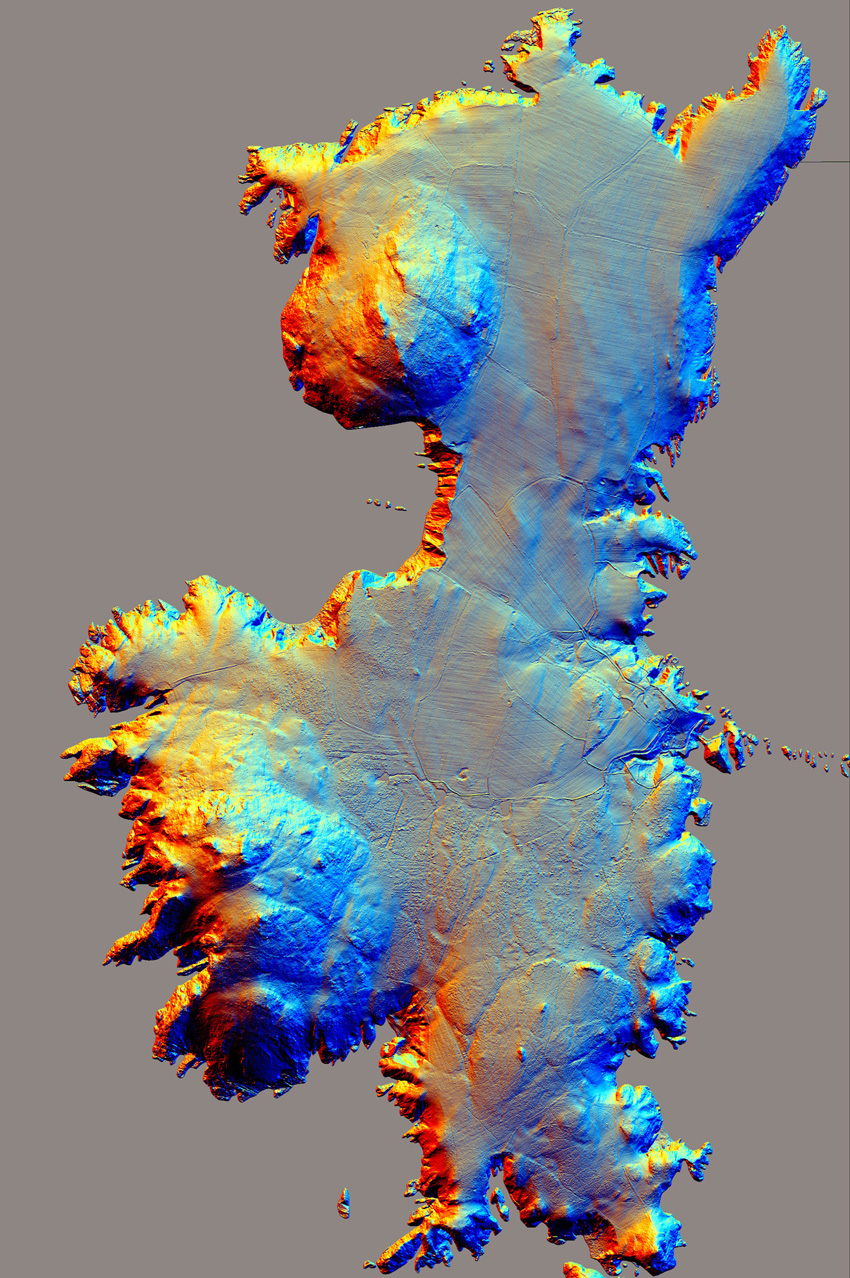 The highly detailed airborne laser scanning (LiDAR) flown by Bluesky International LTD in February 2017 provides a unique and unparalleled view of the whole Island at a resolution of 25cm. Different 3D visualisations have revealed many archaeological earthworks for the first time which are either inaccessible on foot or are too subtle to see on the ground due to bracken and scrub vegetation. Historical aerial imagery from the National Monuments Record of Wales archive in Aberystwyth has also been studied to identify cropmarks of underlying archaeology that has been ploughed flat in modern times.

Previous surveys carried out during the mid-1990s by archaeologists Heather and Terry James for the RSPB recorded prehistoric cairns and field systems on the island’s two summits of Carn Ysgubor and Carn Llundain. The CHERISH team has expanded on this work using computer aided mapping from the new LiDAR data, along with digitised historical aerial imagery. From this, archaeologists have now furthered the understanding of how the prehistoric and medieval agricultural landscape may have appeared.

Dan Hunt, CHERISH archaeologist at the Royal Commission, said; ‘We have added a wealth of new archaeological sites to the story of Ramsey Island, using an incredible 3D dataset which has presented us with a stunning view of the island in enormous detail. We look forward to working closely with the wardens of RSPB Ramsey Island, and other colleagues in Pembrokeshire Coast National Park, to investigate these discoveries further’.

3D view of Ramsey Island from the south-east generated from the LiDAR. Colours differentiate height above sea level. (Crown: CHERISH PROJECT 2017. Produced with EU funds through the Ireland Wales Co-operation Programme 2014-2020. All material made freely available through the Open Government Licence).

The new computer aided mapping combines previous surveys with new discoveries. Archaeological features depicted on the new mapping range from Bronze Age burial mounds to ploughed-out post-medieval field boundaries, all of which build a picture of how the landscape may have appeared throughout the ages.

The prehistoric landscape of Ramsey Island extends to the northern most tip of the island where the site of a possible prehistoric coastal promontory fort has been identified on the high rocky promontory of Trwyn-SiÔn-Owen. This defended coastal fort was probably a permanent defended settlement or a gathering place for people living and farming on the island. The visible remains comprise a broad ditch that separates the promontory from the mainland, dividing two distinct areas of the island. The site will now be further investigated by the CHERISH project and monitored to track any coastal erosion at the site.

The medieval and post-medieval periods are also well represented on Ramsey Island. Much of this evidence comprises ancient plough ridges, mostly confined to northern and central areas; however, there are also earthworks that suggest settlement, industry and religious practice.

North of the farmhouse are yet more remains which indicate the extensive medieval agricultural landscape including the possible site of the lost chapel ‘Capel Dyfanog’. Here the remains of a complex formed of ponds, platforms and enclosures, which straddle the east coast of the island, represent a fitting site for a medieval ecclesiastical precinct that would have afforded a unique view across the waters of Ramsey Sound towards the city of St Davids.

The CHERISH project (Climate, Heritage and Environments of Reefs, Islands and Headlands) is an exciting new five year European funded project that commenced on 1st January 2017. The project will bring together the two nations of Wales and Ireland to increase knowledge and understanding of the impacts (past, present and near-future) of climate change, storminess and extreme weather events on coastal cultural heritage. Over the course of the five years the project will receive more than €4m funding through the EU’s Ireland Wales Co-Operation Programme 2014-20, priority 2 – adaption of the Irish Sea and coastal communities to climate change.

Ramsey Island is one of the best places for wildlife in the UK, and is recognised as both a Site of Special Scientific Interest (SSSI) and a Natura 2000 site. Ramsey is a Special Protection Area for chough and keeping the grassland short and grazed enables these birds to probe for their invertebrate food. 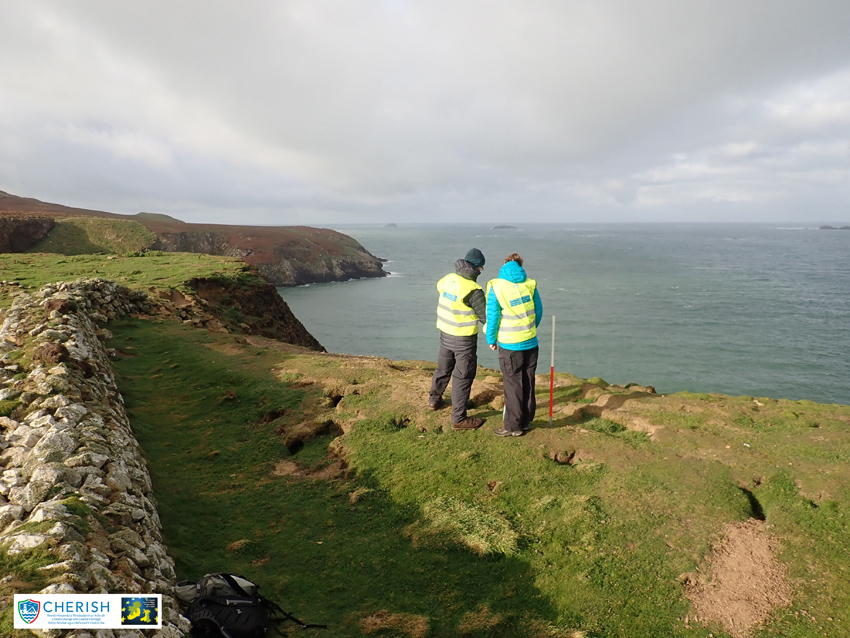 Dan Hunt is the Royal Commission on the Ancient and Historical Monuments of Wales’s Archaeological Investigator for the CHERISH project
daniel.hunt@rcahmw.gov.uk