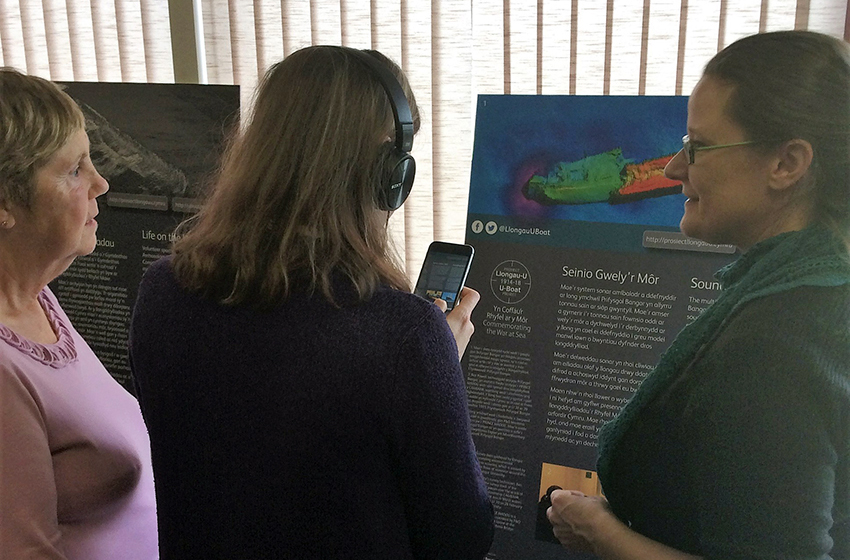 The Royal Commission is working with Danish app developers Vizgu to improve the experience of visually impaired visitors to its exhibitions.

The Royal Commission on the Ancient and Historical Monuments of Wales has worked with the Wales Council for the Blind, and Danish software company Vizgu, to create its first audio-described exhibition. Panels for the Prosiect Llongau-U 1914-18 U-Boat Project’s touring exhibition have been audio-described in both Welsh and English so that smartphone users with visual impairment can now hear an audio-version of the exhibition, enabling them to learn about the impact and legacy of this fascinating chapter of the First World War, and the incredible new ways that shipwrecks around the Welsh coast are being recorded. 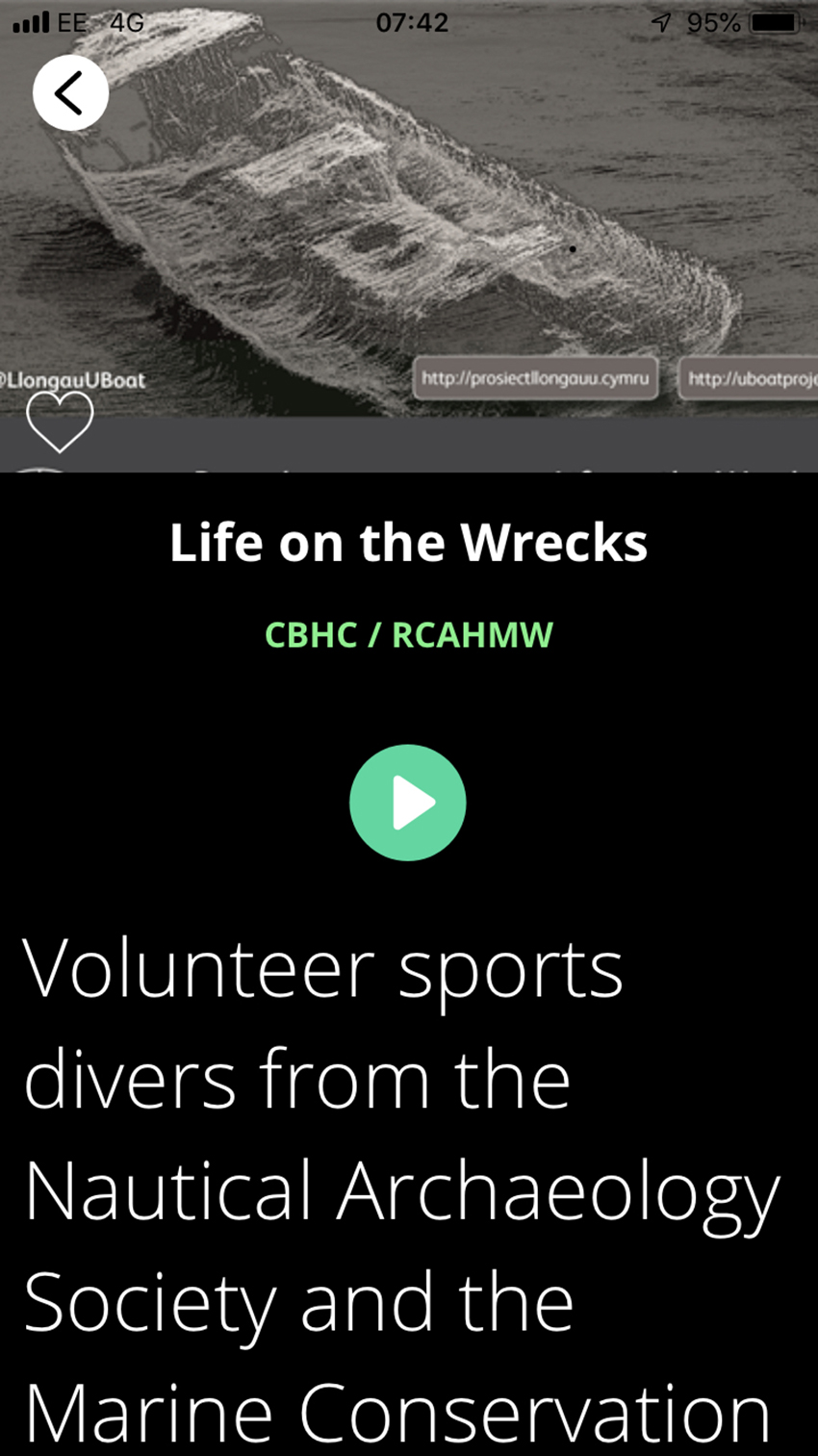 Screenshot of the Vizgu app.

Using the Vizgu smartphone app with its image-recognition technology, the Royal Commission has created bilingual audio descriptions for six touring exhibition panels. Similar to the audio-description systems used in TV services like BBC iPlayer, the Royal Commission’s system uses the smartphone’s camera to recognise the exhibition panel a visitor is viewing, then reads aloud the information on the panel, and describes the images featured, allowing visually-impaired visitors to build up a mental image of the exhibition. 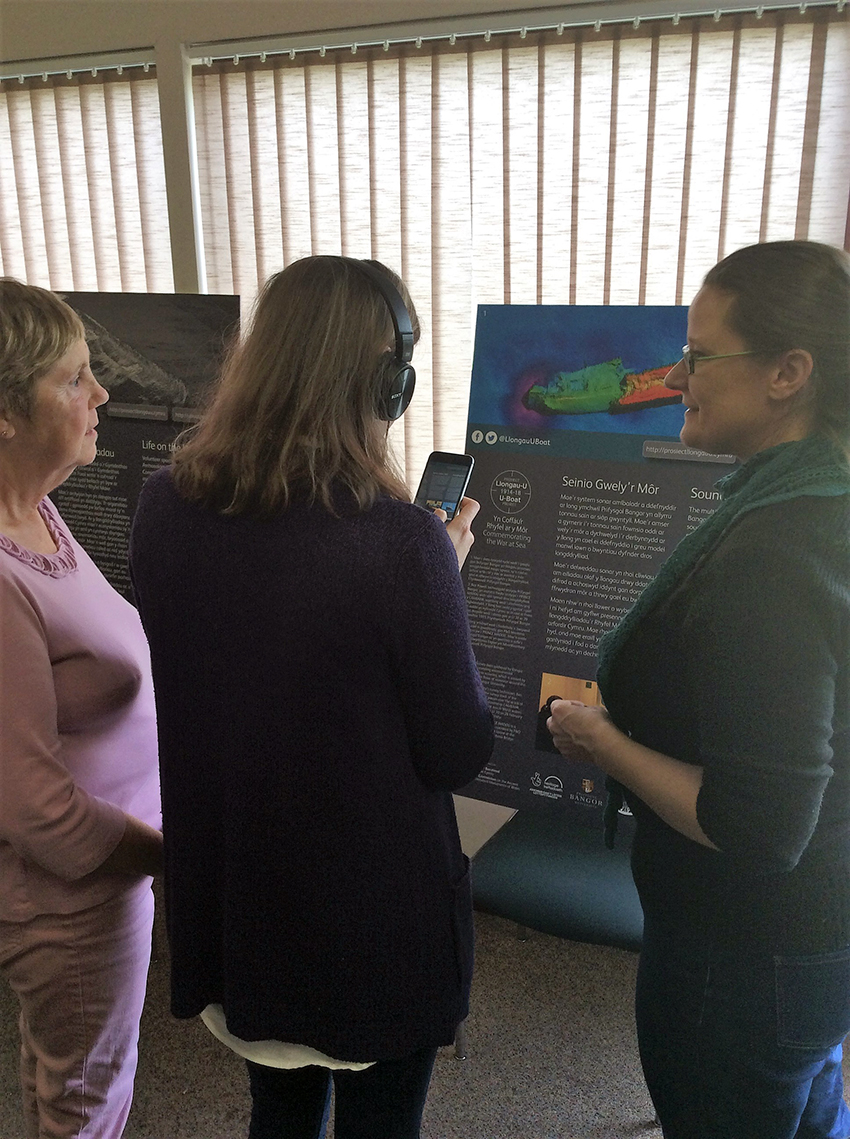 Members of the Wales Council for the Blind testing the system with Dr Rita Singer of the U-Boat Project at their regional council meeting in Carmarthen, October 2018.

Following a testing session in October with blind and visually impaired members of the Wales Council for the Blind (WCB), Tom Pert of the Royal Commission worked with Mensur and Esmir Ibricic of Vizgu to improve their smartphone app:

“We wanted to act on the feedback from our blind and visually-impaired testers at the WCB event in Carmarthen. The first step in this process was about learning how to audio-describe images so that people who may not be able to see the image can still get a sense of what it shows – we had really valuable feedback from the Wales Council for the Blind on our first attempt, which made the whole experience much better. The next step was to work with Vizgu to develop a high-contrast mode for the app, and an option to increase the font size of all text. We also wanted to include large, easy to use audio controls so that the audio descriptions could be paused and re-played at any time. Finally, we made the system fully bilingual so that we can offer both Welsh and English-language interfaces and content to our users”.

Following the success of this pilot, the Royal Commission will be seeking to integrate this image recognition and audio-description technology into more of its exhibitions and interpretation panels in the future, and will be looking to work with partners in the culture and heritage sector to help them make their exhibitions more accessible to blind and visually impaired visitors.

The Project’s exhibition can now be seen at Swansea Museum, Porthcawl Museum, Parc Howard, and other venues over the coming months where the Vizgu system will become available for blind and visually-impaired visitors to use.

We take this opportunity to thank National Lottery players who allow the Fund to invest money to help people across the UK explore, enjoy and protect the heritage they care about. www.hlf.org.uk.  Follow the Heritage Lottery Fund on Twitter, Facebook and Instagram

Technology has helped ease the pain of the interaction of the blind. Now they can read and understand the content of articles, news from the internet. They deserve much love and attention.