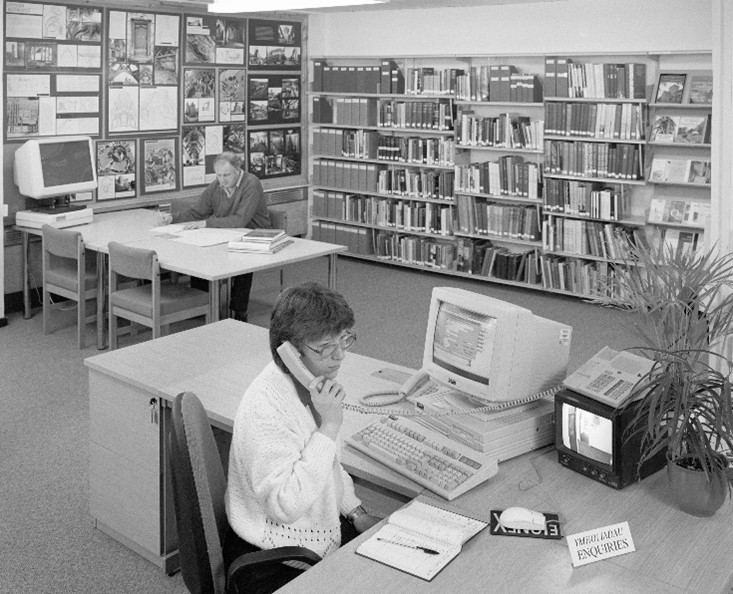 In 1908 the RCAHMW was established under Royal Warrant to investigate and record the archaeological and built heritage of Wales. Surveys, photographs and Inventories were produced as part of this work and books, pamphlets and other information collected to inform it. By the 1960s a huge amount of material had accumulated that required sorting, accessioning and cataloguing, and in 1963 the National Monuments Record of Wales (NMRW) was officially set up. This comprised both the archive and library, holding unpublished and published material respectively.

Although originally created to serve the Commission staff, the library is now open to the public and is used in tandem with the archive collections. Its stock directly complements and enhances the archives, covering all aspects of Welsh archaeology, architecture, maritime archaeology, history, topography and cartography, planning legislation and historic environment strategy. A small antiquarian collection is also held. Texts covering wider geographic areas provide context for the Welsh material.

The library collects all the current county archaeological society journals for Wales, as well as the major relevant specialist archaeological, architectural, and historical periodicals. The collections represent the general discourses of Welsh archaeology and architecture, as well as reflecting the specific interests of staff and the projects they have undertaken. Holdings are particularly strong on the key subject areas of Welsh non-conformity, vernacular architecture, and industrial archaeology.

The Commission’s first librarian was W. Gwyn Thomas (1928–1994). He joined the staff of the Commission in 1956 as an investigator working initially on the Caernarvonshire Inventories, whilst also having responsibility for the book collection. By the 1970s this collection had grown substantially and was known as ‘The Investigators’ Library’. A very basic classification scheme was devised to allow the general subject areas to be shelved together. During this period library management took on a more formal approach, with the introduction of staff loan procedures and the segregation of reference-only books. By 1980 all book selection was carried out by a library committee containing representatives from the Commission’s specialisms within archaeology and architecture: Roman and Prehistory; Medieval; Tudor and Stuart; Modern.

The title-page of William Coxe’s An Historical Tour in Monmouthshire (1801) showing the Ordnance Survey stamp.

In 1983 the Ordnance Survey’s Archaeological Division was wound up and their Welsh material deposited in the NMRW, including a considerable number of books and journals. There were a number of antiquarian books, including Coxe’s An Historical Tour in Monmouthshire (1801) and Fenton’s A Historical Tour through Pembrokeshire (1811). It was probably this substantial addition to the library that prompted Thomas to update the existing simple classification scheme to the one whose basic alphanumeric notation are recognisable in the current classification. It is a unique scheme that was likely influenced by that of the Institute of Historical Research (IHR) where Thomas had worked at the beginning of his career. The two schemes use alphanumeric notation and are both strongly geographic. This has since been expanded and ‘granularized’ to incorporate the ever-growing stock and subject development.

The receipt of the OS collection appears to have been a catalyst for change within the library and, once Gwyn Thomas retired in 1988, responsibility for the library passed to the NMRW under Hilary Malaws (née Sherrington). In 1990 the library acquired Dr Hogg’s personal library, another substantial collection of books and journals. Our collections quickly increased again with donations from the retiring Secretary, Peter Smith, and the Commissioner, Dr Apted.

This period saw a shift in emphasis of the library from purely supporting the Commission’s project activity to building a more representative collection on the archaeology and architecture of Wales. In 1996, with the Commission’s move to Plascrug, the library opened to the public for reference purposes and in 1997, under the guidance of the Librarian Patricia Moore, a computerised catalogue was developed. This was migrated in 2016 to Koha, an online library management system, which allows the public to search and browse the catalogue from home.

From its first incarnation in Gwyn Thomas’ room in Eddleston House to the formal opening of the publicly accessible library at Plascrug in 1996, the Commission’s library has taken many forms whilst continuing to develop. In 2016 the Vernacular Architecture Group’s library was deposited as well as a large collection of material on Roman Britain. That year also saw the RCAHMW move to the National Library of Wales where you will find our books and journals on open access within the Royal Commission’s search-room. The shelves are fully browsable and can be used alongside the archive collections allowing readers to employ a fully integrated research approach.

The origins of the Commission’s library are typical of many specialist institutional libraries and reflect the way they grow organically responding to the needs of internal users. As it has developed over time, its collections have broadened and it has opened to the public. The generous donation of substantial book collections has provided a firm foundation on which to actively build a library that reflects the wider archaeological, topographical and architectural discourses of Wales. Thus, not only does the present library complement and provide context to the NMRW archive but it has become an important resource in its own right for research into the Welsh historic environment.