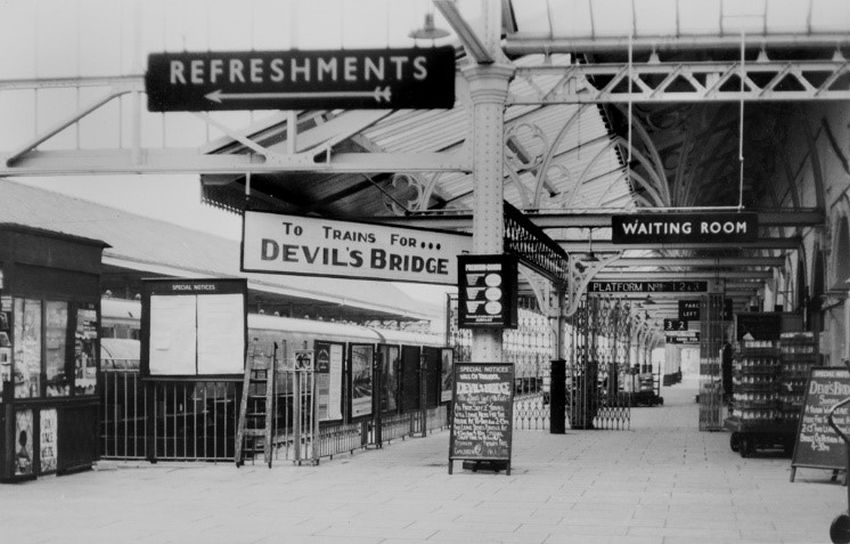 This black and white photograph of the interior of Aberystwyth Railway Station is from the fantastic Rokeby Collection.

* (In fact, he covered the whole of the UK, but the collection was divided between the three (then) Royal Commissions – the English, Scottish and Welsh.) The Welsh collection held in the National Monuments Record of Wales consists of nine albums, some including route maps showing where the lines ran.

Not only is this a striking image, capturing what the rail station looked like in the mid-twentieth century, but Aberystwyth Railway Station holds a particularly dear place in my heart. I moved to Aberystwyth in January 2015 but for the first year (until I started at the Royal Commission in January 2016) I worked in London, where we’d previously lived. Every Tuesday morning at 5.10am my husband and I would walk to the train station for me to get the 5.30am train. You might think that this would be a quiet time of day; think again: in Aberystwyth you are accompanied by the sound of shrieking gulls! While I can’t say I miss the 5-hour commute, whenever I see this picture it reminds me of my first year in Aber. As many people before me, I felt at home as soon as I set foot on that platform for the first time.

* This particular photo is not dated. Do let us know if you have ideas on when it was taken!

Having had a longer look at the photo with a magnifying glass, if the notice board has a fare of 4/- ? Then there was a 4/- morning train fare from 1963 to 1965.
Apologies: I noticed that I typed the wrong date for Bow Street picture it should have read 1963. Which I guess doesn’t alter the date span of early 60’s

Brilliant! Many thanks David for taking the trouble to look into the info on the notice board, we will add that date range to the photograph.

Hi, from the carriage stock in the background it could be mid fifties, as B.R. began to promote the Vale of Rheidol Rly. more. If it was possible to read the V.o.R. fare on the notice board then you could narrow the date down somewhat. With regards to electrification poster – Green’s book Vol.1 coast lines of the Cambrian railways has an electrification poster in Bow Street station 1962. So late 50’s to early 60’s?

One of the posters you can see looks like one to do with London Midland Electrification and a quick search on-line dates it to c.1965. Which would tie in with when the photographer was active.

Thanks Dave, we will add the date range to the photograph – great!