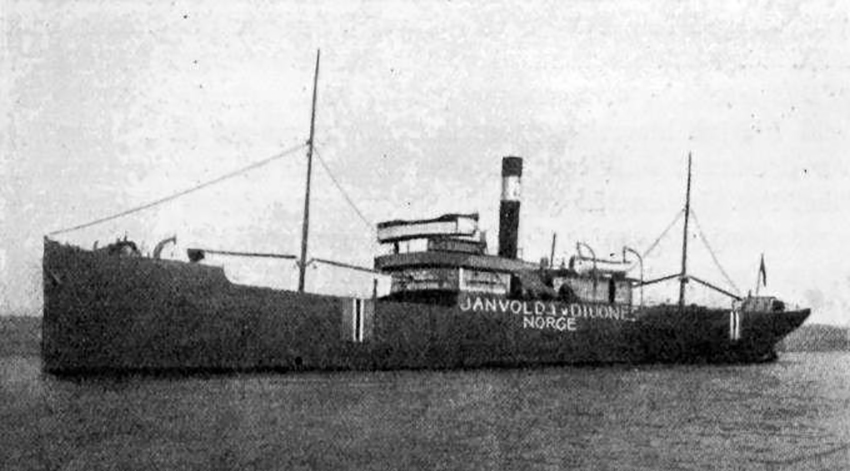 The Norwegian-registered JANVOLD is one of the wrecks included in our surveys for the ‘U-Boat Project Wales, 1914–18: Commemorating the War at Sea’.  The site is allowing us to explore the impact of U-boats on shipping belonging to neutral nations which continued to use Welsh ports.

Thanks to the help of Norwegian students from Aberystwyth University, who sourced historic documents in Norwegian archives during their summer break, we can now reveal a story of special courage.

The JANVOLD was built in 1904 by Grangemouth & Greenock Dockyard Co on the Clyde.  The vessel’s last owner was Johs Larsen of Bergen. In Julius Christopher Meyer, the JANVOLD had an experienced captain. Moreover, the ship’s crew were well trained in the appropriate drills when under attack from a submarine.

In April 1917, the ship had come under attack but still gone to the rescue of the crew of the SS POITIERS. The JANVOLD was on passage from Bilbao to Cardiff, with an iron ore cargo, when a violent shock was felt throughout the ship. The crew nearly launched the lifeboats when it was realised that it was not the JANVOLD that had been torpedoed but another steamship nearby – the French registered SS POITIERS.

Meyer left his crew in the safety of the ship’s lifeboats and, with only the 2nd Engineer onboard who returned to the engine room, navigated the JANVOLD to pick up the POITIERS crew. A torpedo narrowly passed ahead of the JANVOLD. A second and then a third steamer was sunk nearby during the time that the JANVOLD was rescuing its first boatload of survivors. Meyer then took the JANVOLD into the shallower water under Hartland Point on the Devon Coast, to wait for the ship’s lifeboats to rejoin the vessel after they had picked up further survivors. More torpedoes passed ahead and astern of the ship crashing into the shoreline.

The above crewmembers remained onboard for the JANVOLD’s last fateful voyage. On the 26 May 1917 the ship and her escort were passing Bardsey at around 0:40am, when the ship was hit aft by a torpedo. The escort, HMT LORD ALLANDALE, rescued survivors. It then searched for a further two hours for the four men that were still missing before returning to Milford Haven.

Thanks to a Norwegian Report of the Inquiry into the loss located by the students, we can now give names to the four mariners who lost their lives – Chief Engineer Bernhard Hansen from Bergen, 46 years old; Sailor Haakon Kristiansen from Holmestrand, 33 years old; Stoker Aksel Bruvik from Bruvik near Bergen, 25 years old; and Sailor Emilio Lascano, born 1897 in Buenos Aires.

The ‘U-Boat Project’ commemorates the Great War at Sea around the coast of Wales. It is a 2-year Heritage Lottery Funded partnership project led by the RCAHMW, with an overall value of £1M, which provides unprecedented access, for the first time in 100 years, to the remains of 17 wrecks on the seabed off the Welsh coast which are part of our Great War heritage.

We take this opportunity to thank National Lottery players who allow the Fund to invest money to help people across the UK explore, enjoy and protect the heritage they care about. www.hlf.org.uk.  Follow the Heritage Lottery Fund on Twitter, Facebook and Instagram