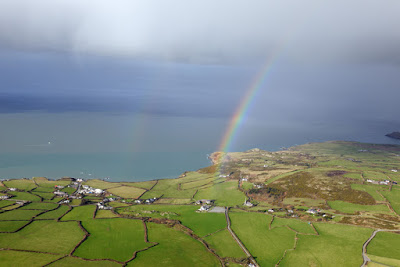 Aerial Archaeology in winter – sunshine and rainbows over Anglesey

Low winter sunlight, combined with low vegetation and bare woodland, is a rare time for the aerial archaeologist hunting for earthwork archaeology and unrecorded monuments. This was especially true in Wales this winter where there was seldom a break in the gales and storms. Occasionally the sun did break through —and when it did, Toby Driver was able to get airborne to record scheduled monuments and known archaeological sites in winter conditions, as well as scouting for unrecorded sites in low, raking light.

One particularly stunning set of views of Anglesey was obtained on 11 February 2016 during a brief ridge of high pressure. Although it was raining on arrival at Caernarfon Airport, and the flight was brought to a close by heavy showers later on, for two hours Anglesey was bathed in glorious low winter sunlight with even the occasional rainbow. The flight proved valuable for documenting some of Anglesey’s stunning coastline and prehistoric monuments like Din Llugwy hut group, as well as later industrial monuments and landscapes along the north coast. The following views offer a flavour of some of the archaeological sites recorded. 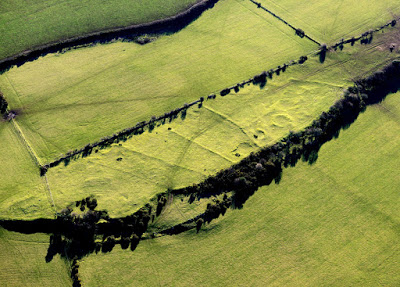 Plas Gwyn prehistoric settlement and field system, on a hill to the south of Benllech, was originally discovered during Royal Commission aerial survey in 1999. The group of roundhouse footings can be seen enclosed within a polygonal boundary. 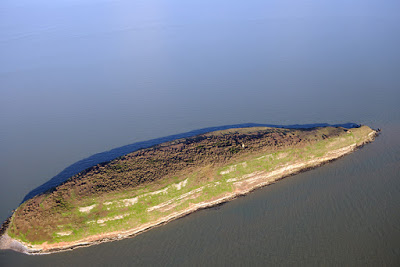 Puffin Island or Priestholm/ Ynys Seiriol, picked out in bright sunlight, rises like a whale from a dark winter sea (AP_2016_0199). 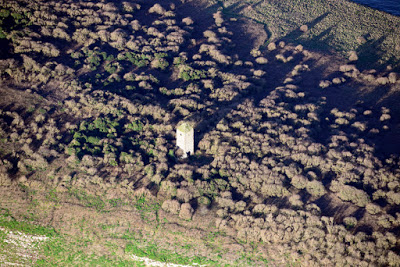 A detailed shot of the solitary twelth-century church tower of the monastery on Priestholm or Puffin Island, casting a long shadow across the surrounding vegetation (AP_2016_0205). 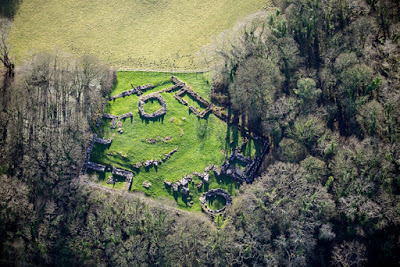 Din Lligwy Iron Age and Romano-British hut group on eastern Anglesey is one of the most accessible sites of its type in north Wales. The settlement has impressive stone-built roundhouses alongside rectangular buildings (AP_2016_0241).

Love to know whats hidden beneath the surrounding trees