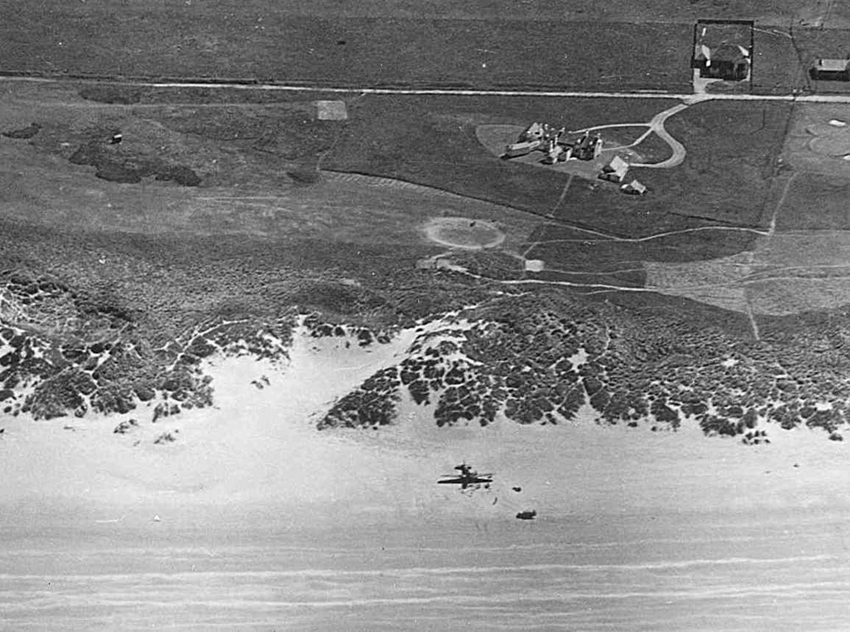 An aeroplane on the beach! Ynyslas, June 1940

During summer 2012, RCAHMW staff recorded a series of interviews with people who had a direct connection to the former rocket development site at Ynyslas, Ceredigion (NPRN 408393). One interviewee, Mr. David Williams, recalled the story of the day an aeroplane was forced to land on the beach.

Here is a transcript:

DW: ….one of ours luckily! Nothing very exciting, it was only an aeroplane used for towing air-borne targets. The aeroplane was flown from Tywyn where there was a military base and an airstrip and they were flown for the anti-aircraft training base at Tonfanau near Tywyn. So that was everlasting flying up parallel to Borth beach, two or three miles out, maybe a bit more. And that was being everlasting shot at, you know. So there we are, that used to go up and down. It was just there, you know, eventually it was just part of the scenery again.

MP: Do you know why it landed on the beach?

DW: Yes, the aeroplane that landed on the beach wasn’t actually from Tywyn, the same type of plane a Hawker Henley. It was a Hawker Henley on loan to the Rolls Royce Company as a test bed for the Rolls Royce vulture engine which was being developed at that time. Being put into, or hopefully into, the Avro Manchester – forerunner of the Lancaster and it was put into a Hawker Henley to fly round the country to test it. The engine broke down and it landed in Borth and they had to put another engine in. That also broke down. I’ve got all the documentation – a man came here researching it all and kindly gave me copies of all the Rolls Royce details of it. Almost immediately after that, they planted railway lines all along the beach. Whether that was coincidence or what – or whether they thought if we could land here, the Germans could land too. How many people would have known about that really? A lot of people would just think that’s an aeroplane on the beach and that’s it, you know.

After the recoding had finished Mr. Williams said that whenever he discussed the incident, he often sensed that people did not believe his story.

On an unrelated search through the RAF Medmenham aerial photographic collection, we came across a shot that was taken on 14 June 1940. An aircraft on an aerial photographic reconnaissance training flight (Ref MWO7), happened to record an image of the stranded aeroplane on the beach (Frame D 21), and confirmed Mr. Williams’ story.