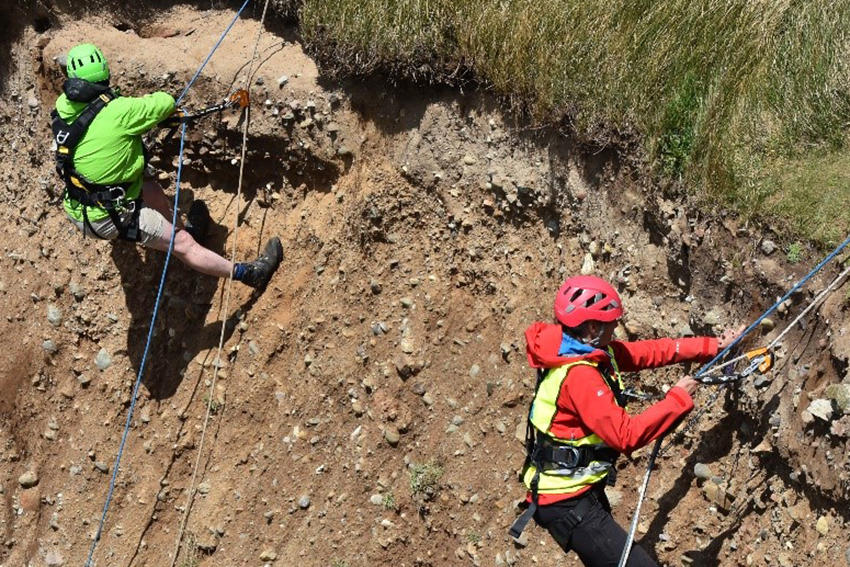 Archaeology at the edge!

The beginning of June saw CHERISH archaeologists and geographers from the Royal Commission and Aberystwyth University continuing their exciting investigations at the prehistoric coastal promontory fort of Dinas Dinlle (more information about Dinas Dinlle). Working closely with the National Trust, Cadw and Natural Resources Wales the team has been busy recording archaeology and geological features revealed by heavy terrestrial and coastal erosion of the western cliff-face. Cores were also taken from the southern banks and ditches of the fort to understand a bit more about how it was constructed and to recover any datable environmental remains.

How to examine a steep, collapsing cliff edge

This new work presented a real challenge: How to examine a steep, collapsing cliff edge on a highly protected monument? The answer came with help from Plas y Brenin National Outdoor Centre who safely rigged and supervised the rope access for the archaeologists and geographers. The work went surprisingly smoothly, considering it was carried out several metres above the beach below!

Initial results have been extremely interesting, bringing into question the way in which Dinas Dinlle was originally constructed. Both the cliff-face investigations and coring yielded very little in the way of archaeological remains which, at a site defined by such dramatic earthworks, was unexpected. Even the southern ditch appears to have not been ’built’ but formed naturally through complex hydrological processes during the end of the last glacial period around 12,000 years ago. Stony material discovered through coring the ramparts does however suggest some construction, meaning the people responsible for building Dinas Dinlle could well have exploited pre-existing natural features to steepen the slopes and accentuate their constructed banks. Perhaps the existence of natural ‘ramparts’ and ‘defences’ – coupled with a prominent coastal position – first attracted prehistoric settlers to the site.

Investigations will continue throughout the project to monitor how much is being lost to the sea – and to the increasing effects of climate change on the monument – using techniques such as excavation, laser scanning and UAV surveying.

Our work at Dinas Dinlle continues with our exciting volunteer excavation being led by Gwynedd Archaeological Trust in August, with a public open day on Saturday 17th August. This will be the first open excavation ever held at Dinas Dinlle. The possible remains of two prehistoric roundhouses situated close to the eroding cliff-face within the fort will be investigated along with the remains of medieval agricultural buildings and field boundaries to the south. Hopefully we will be able to prise some more of the fort’s secrets during the excavation!

CHERISH (Climate, Heritage and Environments of Reefs, Islands and Headlands) is a 5 year European-funded Ireland-Wales project between the Royal Commission on the Ancient and Historical Monuments of Wales, the Discovery Programme: Centre for Archaeology and Innovation Ireland, Aberystwyth University: Department of Geography and Earth Sciences and Geological Survey, Ireland.

The project aims to raise awareness and understanding of the past, present and near future impacts of climate change, storminess and extreme weather events on the rich cultural heritage of the Irish and Welsh regional seas and coast by employing the latest innovative techniques.

Find out more about the CHERISH project

Find out more about the CHERISH project at http://www.cherishproject.eu/en/ and for latest news and activities you can follow the project on Facebook @CherishProject and Twitter @CHERISHproj.

For more information on how to get involved with this summer’s excavation please contact Dan Amor at Gwynedd Archaeological Trust at dan.amor@heneb.co.uk   01248 366970