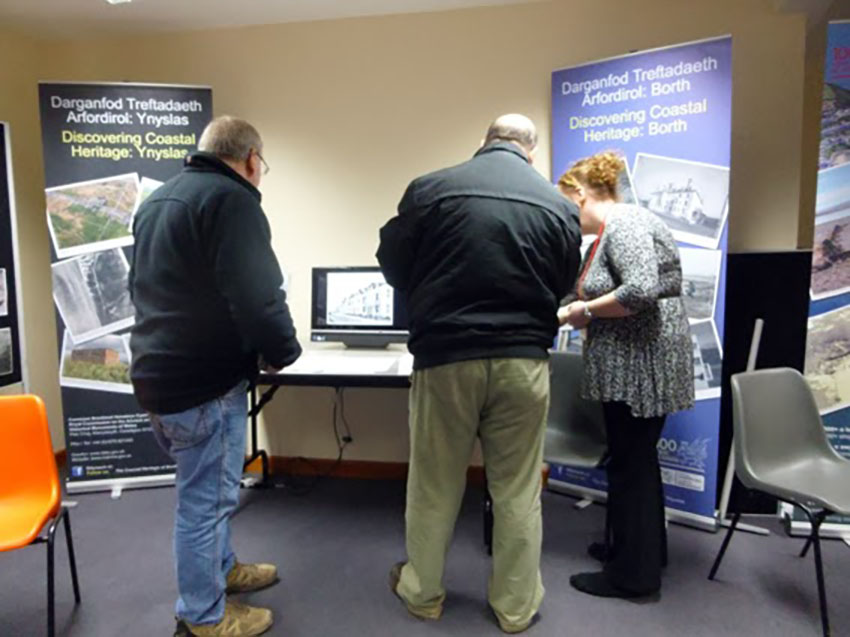 Last week’s community heritage day in Borth, organised by the Royal Commission on the Ancient and Historic Monuments of Wales gave some real insight into life in the past.

The organisers, community archaeologists Kimberly Briscoe and Sarahjayne Clements, were extremely pleased that the event was so well received and said that a wealth of new information had been brought to light.

Sarahjayne said, ‘We asked people to bring any photographs, information or memories they had about Borth. Members of the community were also invited to look at the photographs, maps and records the Commission already holds in the archive, which helped spark memories.  Lots of people turned up, bringing with them a variety of items from war medals to a photograph of Concord passing over the war memorial. There were lots of family photographs and some of buildings in Borth.’

Kimberly said, ‘We also had lots of people sharing their memories of Borth’s past. Members of the community took great delight in telling us all about their memories, including the locations of shops and banks, what it was like at school, and how one lady’s family used to take their carpets to be dried out in the hall after bad weather.’

Kimberly and Sarahjayne said that they would like to thank all the people who came along and shared their information.  The new information will be used to update our records on Coflein (the online database for the Royal Commission) and added to ‘The People’s Collection Wales’.

Kimberly and Sarahjayne will be running more events until August. Guided walks are already planned in July for the Festival of British Archaeology, and you will also find them at Borth Carnival in August.

If you would like to join in, or have some information to share, they can be contacted at sarahjayne.clements@rcahmw.gov.uk or kimberly.briscoe@rcahmw.gov.uk or search for ‘The Coastal Heritage of Borth and Ynyslas’ on Facebook.