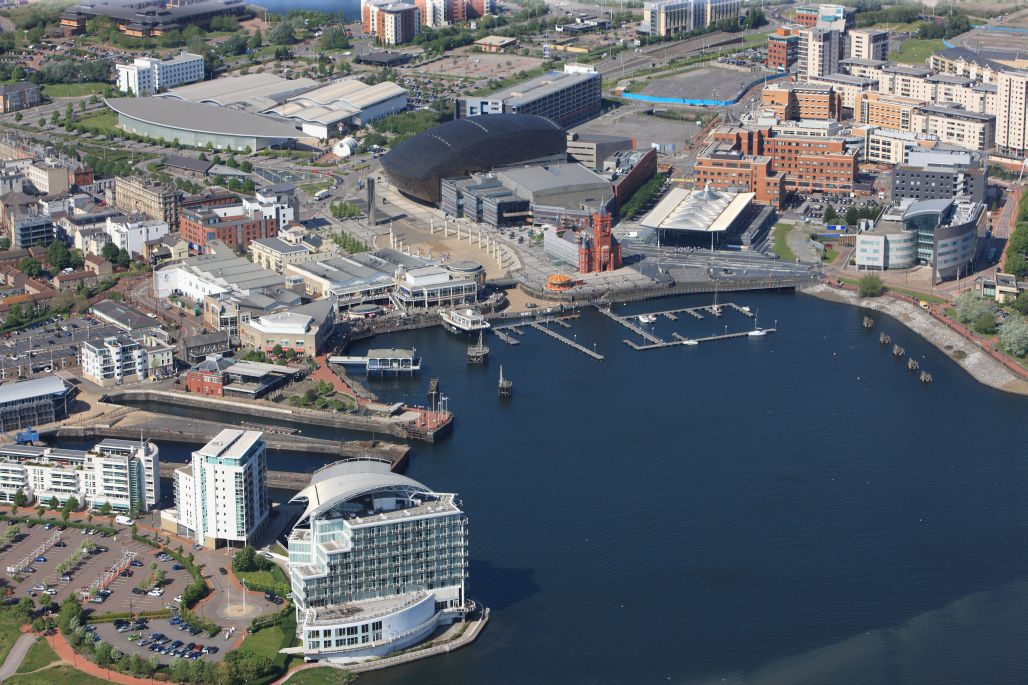 Earlier this week, a blogpost discussed how the constantly changing buildings of Butetown tell the story of the Bay across the nineteenth century. This evolution continued into the twentieth century, as the decline of the coal industry prompted further transformations. 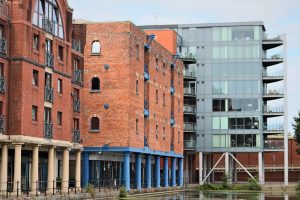 In the 1980s, an award-winning conversion transformed this warehouse into an office building.

Much of the industrial environment has disappeared ­– the Glamorganshire Canal is a park, the Bute West Dock was filled in 1964, and its basin is Roald Dahl Plass ­– but some structures have endured with new purpose. The Bute East Dock is Atlantic Wharf, an award-winning conversion transforming the warehouse at its head into offices. The Spillers and Baker Factory has become flats while the London and North Western Railway Warehouse is a hotel. Cory’s Building on Bute Street and the neighbouring building on Bute Place are being converted into luxury apartments, while the Coal Exchange is a hotel. 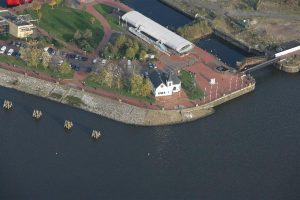 The Norwegian Church in its present location in 2008.

Some buildings also have new locations. The Norwegian Church, originally at the south-east corner of the Bute West Dock, was re-erected on its present site in 1982. Others have made shorter journeys. The Customs and Excise Building was moved some fifty metres backwards in 1992. 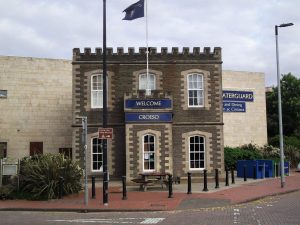 The Customs and Excise Office was moved around fifty metres backwards to accommodate the new promenade.

Other buildings haven’t survived. The site of Merthyr House at the corner of James and Evelyn streets stands empty. Damaged by fire in 1947, its northern section was never rebuilt. Gloucester Chambers at the south-east corner of Mount Stuart Square was demolished after the blizzard of 1982. At the south-west of the square the Bethel English Baptist Chapel, which was the Casablanca nightclub from 1965, is now a car park. Some buildings have made way for new development. In 1993, buildings on Bute Place, Bute Street, and Bute Crescent, including the Grade II-listed Mount Stuart Hotel, were demolished during the construction of the Butetown Link Road.  The Welsh Industrial and Maritime Museum enjoyed only a short existence in Cardiff Bay (1977-1998), replaced by the shops and restaurants of Mermaid Quay. 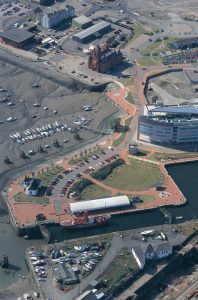 Taken in 1995, this image shows how much Cardiff Bay has changed in just a short time.

These changes highlight the importance of the Royal Commission’s role. By the time the Commission was established in 1908, many structures of historical interest had been built and replaced, the early Commission’s focus on pre-eighteenth-century sites notwithstanding. However, following concerns over the loss of buildings in the Second World War, our remit was expanded to include later buildings, particularly endangered sites. Our archives hold hundreds of images and records of Cardiff Bay’s now-lost structures, an enduring record of Cardiff and Wales’s rich maritime history. 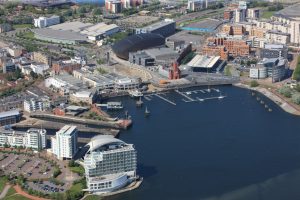 Glamorgan Archives have written a number of excellent blogposts featuring many sites from throughout Cardiff Bay and wider Cardiff. Their website can be found here.

Thank you for your comment. We are glad you found this item of interest. The re-development of Cardiff has been a matter for the local planning authority.We have made a record of historic buildings and dockside structures which are available on Coflein. These records include the unique Aerofilms photographs dating dating back to the 1920s. Cadw, of course, have listed those structures they consider most worthy of preservation. They welcome suggestions about listing structures especially where there is new evidence about their significance.

Thankyou for the information provided. I’m afraid I’m deeply saddened by the important maritime structures that have been deleted in the name of progress. Why does Cardiff not celebrate its historic waterfront in the same way as Bristol, Liverpool or London, instead opting for decay or destruction?