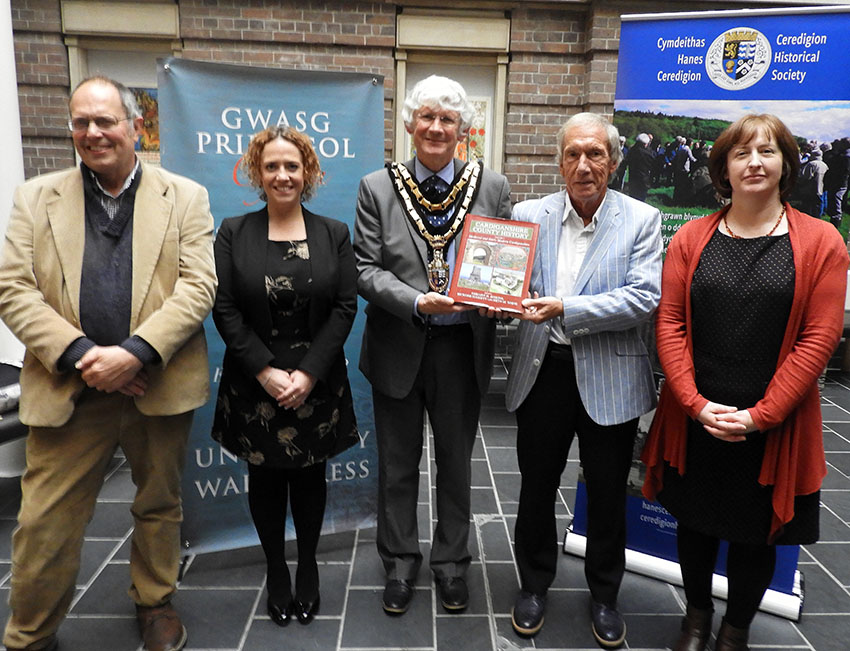 The long-awaited history of medieval Cardiganshire was launched to a full house at the National Library’s Drwm on Saturday 5 October.  This substantial and beautifully illustrated volume is a partnership between the Royal Commission, the University of Wales Press, and Cymdeithas Hanes Ceredigion Historical Society.

This volume deals with the rich social, political, religious and cultural history of a territory that became a county with the Anglo-Norman conquest of south-west Wales. Substantial chapters by past Chairmen of the Commission, Beverley Smith and Ralph Griffiths, cover the political and administrative history of Ceredigion. There are authoritative chapters on the Welsh and English castles of Ceredigion by David Browne and the late Jack Spurgeon, and on medieval houses and their successors by Richard Suggett. Agriculture, education and the role of the gentry and their estates are examined, along with the rich literary culture of Ceredigion and the contribution of late-medieval poets, including the celebrated Dafydd ap Gwilym. There are chapters on medieval religious history and the central role of the great Cistercian abbey at Strata Florida, as well as the post-Reformation church, and the administrative and legal history of the county before and after the Acts of Union.

The book is richly illustrated and includes more than 200 photographs (including aerial images) and drawings of historic structures and archaeological features drawn from the archival collections of the Royal Commission, the work of Toby Driver, Iain Wright and Charles Green, among others.  It is hoped that the volume will make an enduring contribution to the history of the county and to the history of medieval Wales as a whole.

The book was launched to a full programme of talks (Geraint Jenkins, Richard Suggett, Eryn White), music by Owen Shiers and Y Gaseg Deircoes/Three Legg’d mare, as well as Eurig Salisbury on Dafydd ap Gwilym. A recording of the launch can be viewed on the Society’s Facebook Page, Ceredigion History.

Hi Diane, Try the link to the University of Wales Press under Richard Suggett’s name, above.