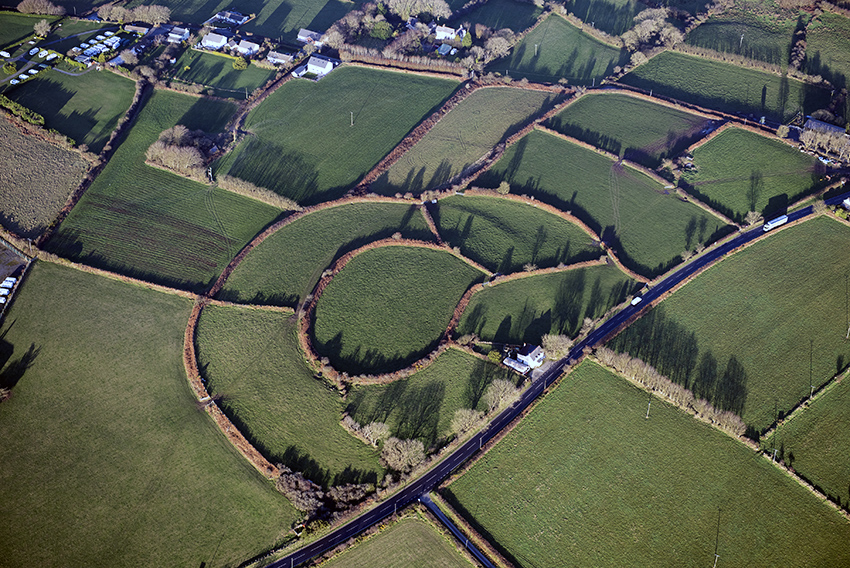 In coastal Ceredigion overlooking Cardigan Bay is an Iron Age hillfort with a curious name; it appears to be the only hillfort in Wales which bears the name ‘Christmas’.

The place-name scholar Iwan Wmffre in 2004 recorded the earliest reference to ‘Kastell Yn Dolig’ in a 1571/2 manuscript. By 1594 on the Gogerddan Estate Records for Penbryn the site appears as ‘Castell Nadolig’, the name still used more than four centuries later. Only one other location seems to bear the same name, an isolated farm near Llandysul, Ceredigion.

Castell Nadolig is famous for finds made there in the early 19th century. Around 1829 a tenant farmer clearing a heap of stones found an incredibly rare pair of Iron Age spoons associated with a burial inside the fort.  One of the spoons bears an incised cross, interpreted early on by antiquarians as a Christian sign from Roman times. The spoons found their way to the collections of the Ashmolean Museum, Oxford, where they can still be seen on display as the ‘Penbryn Spoons’, named after the parish of their discovery. Writing about the find in 1862, the eminent antiquarian Reverend Edward Barnwell, then headteacher of Ruthin School, mused on the ‘Nadolig’ place name:

‘No explanation … has been given of its curious appellation. If we have the original name in an uncorrupted form, it is remarkable that implements bearing apparently the Christian’s badge should have been found in what is thought to have been the praetorium, and most important part of the work.’

We now know that the pair of spoons from Castell Nadolig are not Roman but are pre-Christian, prehistoric artefacts. Analysis of the gold inlay on one of the spoons by Andrew Fitzpatrick in 2007 discovered that the gold composition used could not be later than the early 1st century BC. The spoons may also have been made locally, but within a distinctive tradition of very similar spoon pairs found across Ireland, Britain and northern France, which all share the same design: a cross-incised spoon paired with a plain spoon with a single perforation. All the spoons appear to be insular, originating in Britain and Ireland, and have been linked to British druidical practices of divination. Over 190 years after the discoveries at Castell Nadolig only 27 individual spoons of the same design, some found in pairs, have been recorded from Britain, Ireland, and France.

Today Castell Nadolig lies on private farmland. The hillfort has never been excavated but research on similar sites in Ceredigion and Pembrokeshire suggests the hill may have been occupied for many centuries. Excavations by Dyfed Archaeological Trust in 2006 at the nearby Ffynnonwen settlement a few kilometres west of Aberporth showed initial construction of a palisaded enclosure between the 8th – 4th centuries BC, before a more substantial rebuilding with ramparts and roundhouses between the 4th-2nd centuries BC and continuing occupation into Roman times. Castell Nadolig may well have developed along similar lines.

With the kind permission of the landowners, the Royal Commission began a new programme of investigative fieldwork, including the first geophysical survey of the site in 2019/20. This new work by SUMO Survey revealed an unexpected complexity to the eastern gateway arrangements, as well as a series of plough-levelled barrows or burial mounds within and outside the eastern entrance. These are the first firm evidence of multiple burials within and close to the hillfort. One of the barrows may be the findspot of the famous spoons. A newly discovered square barrow also suggests continuing reverence for this site in the early medieval period.

The conclusion must be that Castell Nadolig was a very special place in the last centuries before the Roman conquest of Britain, possibly a focus for religious ceremonies and burial. Its coastal position, like the famous Llyn Cerrig Bach sacred lake on western Anglesey, may have facilitated visits by overseas travellers from the Atlantic coasts of Ireland, Cornwall, Brittany and Spain, continuing a tradition of exploratory Greek voyages for trade and contact around Welsh and British shores from as far back as 300 BC. In the context of its potential ceremonial role, the unique reference to the seasonal festival of Christmas in the place name may be significant but we lack the evidence to be absolutely sure.

Senior Investigator, Royal Commission on the Ancient and Historical Monuments of Wales

More details of a new drone survey of the fort in 2020 by the Royal Commission.

We thank you for your support during the year and wish you all a happy and safe Christmas and New Year.

Why kept in Oxford? Surely the appropriate place is somewhere in Wales? Are they to be the Elgin Marbles of Wales

There are plans to loan the original spoons back to Ceredigion in the near future for an exhibition. In the meantime there are museum-grade electrotype copies of the spoons on display in the Ceredigion Museum