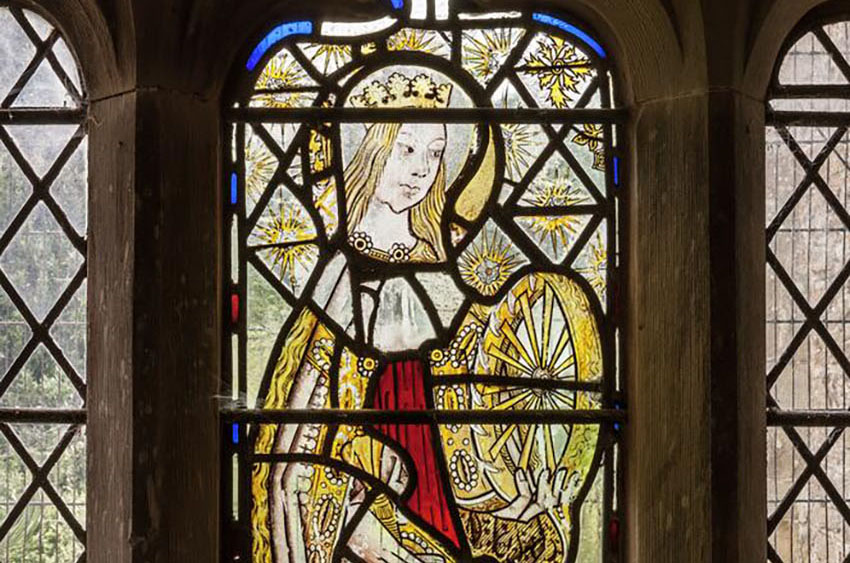 Reading Richard Suggett’s splendid new book about late medieval churches – Painted Temples – got me thinking about the reasons for the popularity of St Catharine (other spellings are available!). Why does she rank with St Christopher as the saint most frequently depicted in medieval wallpaintings and stained glass?

The cults of St Christopher and St Catharine were well established in late-medieval Wales. Jane Cartwright has shown in Feminine Sanctity and Spirituality in Wales (Cardiff, 2008) the range of literary sources relating to St Catharine, including a Middle Welsh Life which highlighted the saint’s virtues of wisdom, faith and chastity and the story of her martyrdom, when she was first tied to a spiked wheel (still remembered in the name of the firework – the ‘Catherine wheel’). Catherine/Catrin remains a popular name in Wales.

St Christopher’s medieval appeal is easily explained. Being the patron saint of travellers, his image, carrying the infant Jesus on his shoulders as he wades through a river, is still carried by many people today in the form of a medal or charm as a symbol of safe travel.

Every church in Britain probably had some representation of St Christopher on the north wall, facing the main entrance to the church. Visiting the church and addressing a quick prayer to St Christopher before setting out on any journey was therefore an advisable policy.

The Church of the Holy Rood in Woodeaton, Oxfordshire, has a 14th-century wall painting of St Christopher with a Norman French inscription that explains why: Ki cest image verra la jur de male mort ne murra, it says, meaning ‘’Who looks on this image, that day shall not suffer an ill death’. Note though that the inscription doesn’t say ‘shall not die’; instead it offers the hope of a good death, which meant one that allowed you to repent of all your sins and receive the last rites from a priest so that you would pass from life to heaven or purgatory rather than heading for an eternity in hell.

St Catharine was popular for a similar reason. According to the hugely popular Golden Legend, a gathering of saints’ lives first compiled c. 1260, praying to St Catharine at the moment of your death virtually guaranteed a place in heaven. In the moments before her martyrdom, St Catharine prayed and asked God to look kindly on anyone who appealed to her for help as they are dying. A voice from heaven affirmed that a place in heaven awaited anyone who devoutly revered St Catharine.

Perhaps to bolster this passport to Paradise, Robert Wodelarke marked the feast of St. Catharine – 25 November 1473 – by founding a college of priests in Cambridge, commanding them to pray for their founder daily while completing their theological studies. St Catharine’s College continues to mark her feast day by remembering women and girls facing violence and persecution around the world. In 2000, the United Nations officially designated 25 November as the International Day for the Elimination of Violence Against Women.

Going round in circles

Was it some pope’s idea of a joke that she is also the patron saint of scholars, educators, philosophers, librarians, archivists, jurists, lawyers, preachers, and theologians? Surely nobody was implying that these learned professions have a tendency to go round in circles. Officially St Catharine was herself noted for her outstanding scholarship: she defeated 50 leading pagan philosophers in debate and even persuaded some of them to convert, even though that meant certain death.

Despite being a virgin herself who wished only to have Jesus as her spouse, she is also the patron saint of spinsters. Known as ‘Catherinettes’, women of a certain age still hoping to find a spouse would mark her feast day by parading in the streets dressed in elaborate hats. This rather one-sided custom is no longer observed, although French milliners still launch their latest hat designs on this day and New Orleans hosts a hat parade on the Sunday before Thanksgiving (24 November) that is (naturally) now open to participants of any age, gender or marital status.

As for the lacemakers, a book called Cattern Cakes and Lace, by Julia Jones and Barbara Deer, celebrating foods associated with particular dates in the calendar, tells us that spinning and lace-making communities around Britain once celebrated the feast of St Catharine by making Cattern Cakes, spiced with cinnamon and caraway seeds. You will find several recipes for these cakes on the internet, but most seem to omit one vital point: before they are baked you need to incise a swirl on the surface of the dough with a sharp knife so that the baked cakes resemble a Catherine Wheel.

Protestants in Britain managed to find a way to continue this tradition after the Reformation without being accused of idolatry. They invented the story that the cakes were really baked in honour of Henry VIII’s first wife, Catharine of Aragon, who, they claimed, was being commemorated as a generous patron of the English lace trade.

Sadly, the Reformation also saw the whitewashing of church wall paintings and destruction of stained-glass windows. All we now have left of the once ubiquitous painted depictions of St Catharine are odd fragments of colour, though Richard’s book celebrates one almost complete late 15th-century example in the church of Llandeilo Talybont, now rescued from dereliction and re-erected in the grounds of St Fagan’s National Museum of History. Rather miraculously, one other depiction of St Catharine in painted glass survives tucked away in St Peter’s Church, Old Radnor. This window shows St Catharine in association with the badge of Edward IV and plausibly dates from his reign (1462-83).

Please join us online at 5pm on Thursday 14 April 2022 for the launch of “Painted Temples: Wallpaintings and Rood-screens in Welsh Churches, 1200–1800/ Temlau Peintiedig: Murluniau a Chroglenni yn Eglwysi Cymru, 1200–1800”. We very much hope you can attend. The launch will feature a short introduction by the author, Richard Suggett, as well as two specially commissioned on-site videos featuring the extraordinary painted interior recently discovered at St Cadoc’s Church, Llancarfan (near Cardiff), and the wallpaintings rescued from St Teilo’s Llandeilo Tal-y-bont, and painstakingly recreated at St Fagans open-air National Museum of History, as well as a Questions and Answers session.

Temlau Peintiedig: Murluniau a Chroglenni yn Eglwysi Cymru, 1200–1800 / Painted Temples: Wallpaintings and Rood-screens in Welsh Churches, 1200–1800 by Richard Suggett is available from our online shop at £29.95 with a 10% discount to Friends and all attendees to the launch.*