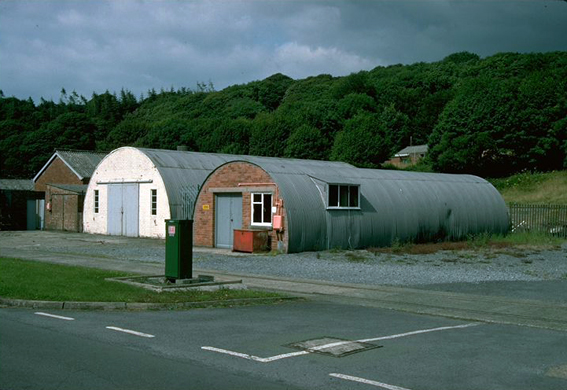 Centenary of the Nissen Hut

One of the world’s most recognisable military structures is the humble half-cylindrical Nissen Hut. The simple design was developed by Canadian-American Captain Peter Norman Nissen, of 29th Company, Royal Engineers in 1916.

First used later that year at Hesdin, France, the light, economic and reusable huts were manufactured in three widths – 16ft; 24ft; and 30ft, the internal bays were set at 6ft, so any length of hut could be used, as necessary. The whole standard unit could be carried by a single 3-tonne army lorry. The load comprised the corrugated-iron outer skin; wooden inner linings; the semi-circular metal frames; a wooden door; and oiled cloth windows. A well-rehearsed team of six men could assemble a hut on a prepared concrete base in four hours. One hut was completed in a record time of 1 hour 27 minutes. It is estimated that over 100,000 units were produced during WWI.

Nissen had filed the patent for his design in the UK, Australia, South Africa, Canada, and the US. But he declined any royalties for the duration of WWI, and the manufacturing company did the same again during WWII.

Captain Nissen was not the only one to be developing temporary hutting during the First World War. Other solutions included Armstrong Huts, Aylwin Huts, Forest Huts, Tarrant’s Portable Huts, and Weblee Huts, each named after officers in the Royal Engineers. During the Second World War there were similar designs such as Abbey Huts, Iris Huts, Romney Huts, and Tufton Huts. However, none of these was as ubiquitous as one of the great design classics of the twentieth century, the eponymous “Nissen Hut”. The simple concept has continued to be used for almost a century without alteration to its basic shape.

Watching the river rising fast beside my house, I thought more about a superfast replacement for my home if it gets washed away. I’ve always considered corrugated iron an impossible building material, till this eve, when it occurred to me how very easy it must be to build a basic shelter with a few of those CURVED sheets.
A small size structure might stand up by itself, without extra supports.

It was Corporal Robert (Bob) Donger, a mechanical draughtsman with the 29th Company Royal Engineers who wrote great recollections of working with Colonel Nissen. Together they produced the working drawings and instructions as to how to put up the hut and how to pack the hut into a standard Army truck. The traditional house building model of troops huts with walls and eaves was not very practical in war time when rapid mass production was a necessity. Because the Nissen hut was made of corrugated iron it became more of the concern of the engineer. More information can be found… Read more »

Hi, family history from my grandmother describes how the concept was Nissen’s but that the detailed design was undertaken by my grandfather Acting Lt George Bulbeck – a war office Surveyor and Architect. Did you find anything in your research that substantiates that?

That’s very interesting – I will pass this information on to Medwyn who wrote the blog post. Thanks.