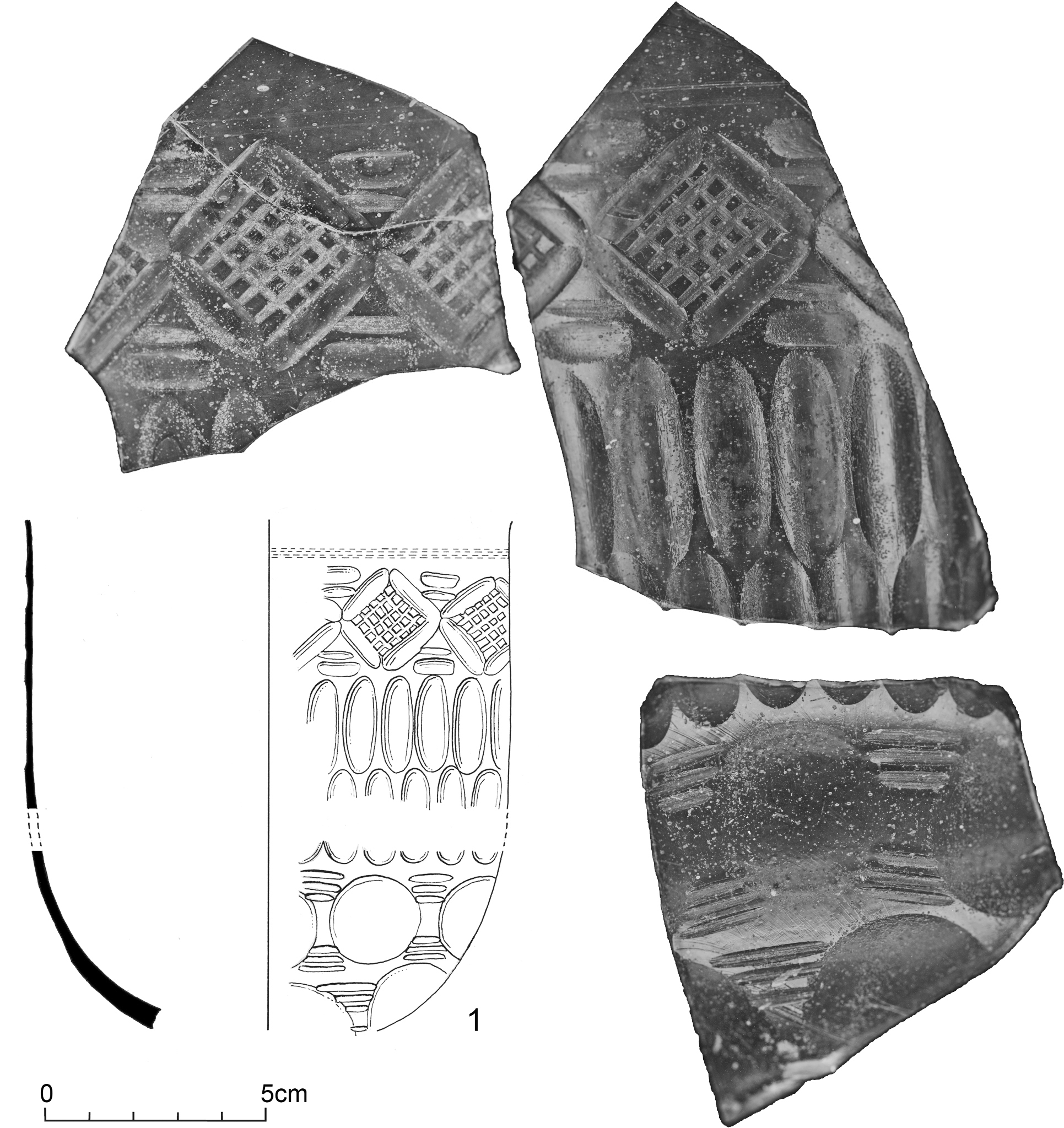 A partnership between Ceredigion Museum and the Royal Commission on the Ancient and Historical Monuments of Wales has attracted £1,000 funding from the Association for Roman Archaeology to display fragments of a unique Roman glass vessel, found at Abermagwr Romano-British villa.

The villa at Abermagwr was discovered during aerial photography in 2006 and excavated by Dr Jeffrey L. Davies and Dr Toby Driver between 2010 and 2015, in a volunteer-led community project. It remains the only known Roman villa in the county and the most remote Roman villa in Wales. The finds have been researched over time and the best have been put on public display at Ceredigion Museum. The finds include parts of Ceredigion’s earliest known slate roof, just one of the innovations discovered at the villa.

The most recent Roman finds handed to the museum are the cut glass fragments. The ARA grant will fund a bespoke mount, made by a museum specialist, to enable the delicate glass fragments to take pride of place in the Museum’s archaeology gallery.  Roman cut glass is rare; only one cut glass beaker is on permanent display in the British Museum and the design on the Abermagwr vessel is unparalleled in Roman Britain. Professor Jennifer Price was struck by the rarity and quality of the glass vessel describing it as ‘of outstandingly high quality….[which] must have been an extraordinary item of luxury. Its quality is vastly superior to the rest of the glass vessels found at the villa’

Prof. Barry Burnham  of University Trinity Saint David, Lampeter, said “Its discovery so far west in Wales is all the more significant because it is vastly superior to the general range of glass material found anywhere in Wales. This raises interesting questions about how it came to be here, who owned it, and what it signifies in terms of social status and economic links.”

Carrie Canham, Curator, said “When I was at school we were taught that the Roman’s didn’t have a significant presence in West Wales, but local excavation results have overturned that assumption. This extraordinary object shows that the villa at Abermagwr was the home of comparatively wealthy Romans enjoying the good things in life. I’m extremely grateful to the ARA for the funding that will enable visitors to the museum to see it displayed to its best advantage.”

Councillor Catherine Hughes, Cabinet Member with responsibility for Porth Ceredigion, Early Intervention, Well-being Hubs and Culture said: “It is a delight to hear the history of the rare Roman cut glass here in Ceredigion. Thanks to Carrie and the team at Ceredigion Museum and the Royal Commission on the Ancient and Historical Monuments of Wales for their work, and the Roman Archaeology Society. We look forward to the day when we can see the pieces in all their glory.”

The Covid-19 pandemic is delaying the work to make the mount until later in 2021. The glass fragments are too delicate to courier to the craftsperson making the mount, so he will have to come to Aberystwyth and set up a temporary workshop at the museum. Then the fragments will go straight on display.