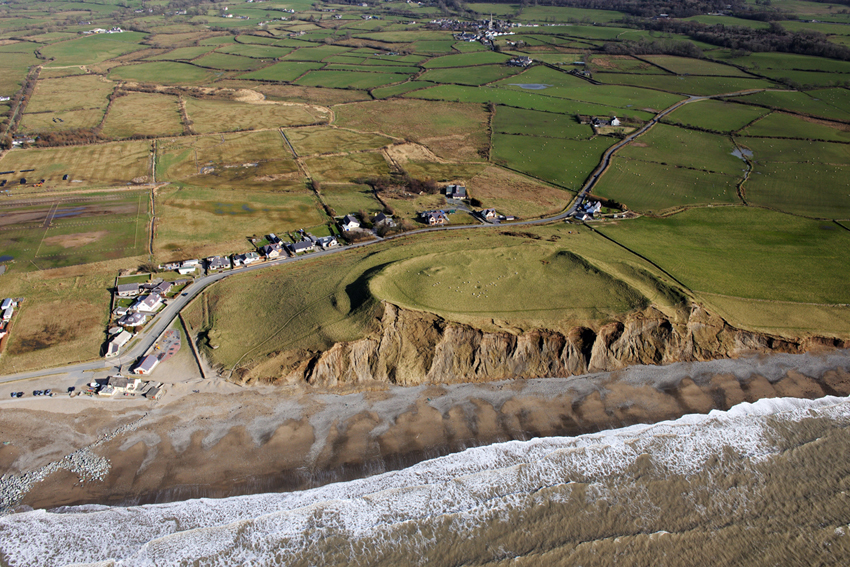 An exciting new archaeological project has begun on the impressive coastal fort of Dinas Dinlle near Caernarfon in north Wales. Early maps and the curve of the defences suggest the fort was once entirely enclosed but today part of the western defences have been lost to the sea following thousands of years of coastal erosion.

Little is known about the monument. It is thought to be late prehistoric in date and chance finds also suggest occupation in the Roman period. In the early 20th century it formed part of a golf course, whilst during the Second World War a pill box, seagull trench and observation post were constructed on the northern slopes to protect nearby RAF Llandwrog – now Caernarfon airport.

Dinas Dinlle coastal fort is owned by the National Trust. It is set on a hill of glacial drift sediments overlooking the sea and Caernarfonshire coastal plain. The fort is protected as a Scheduled Monument whilst the cliff face itself is a Site of Special Scientific Interest, designated for the geological importance of exposed glacial sediments (Crown Copyright: RCAHMW AP_2014_0877)

The new research is being led by a team of archaeologists, surveyors, geographers and scientists from the European funded CHERISH – climate change and cultural heritage project.  Over the next 4 years the CHERISH team will be undertaking a number of studies to record and monitor the impact of the coastal erosion and also provide a greater understanding of the fort and its environs.

Louise Barker, a senior archaeologist on the CHERISH Project said: ‘this is one of the finest coastal heritage sites in north Wales, but is threatened by active erosion. Through our work we hope to gain a better understanding of when Dinas Dinlle was built and occupied, and how much has been lost to the sea’ 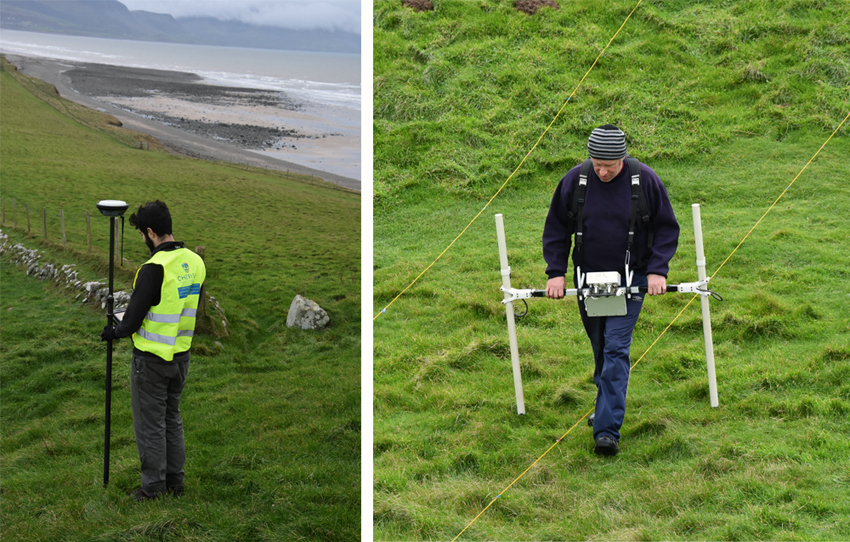 New survey in progress. Detailed survey using a global navigation satellite system and geophysical gradiometer survey which can detect archaeological features such as ditches and hearths to a depth of approximately 1 metre below the surface.

Initial work by the CHERISH team has included new aerial photography from which it has been possible to create a 3D model of the monument and a new detailed survey to assist in the interpretation of the site by providing a greater understanding of the fort’s development, form and condition. CHERISH has also funded a new geophysical survey to see beneath the soil, carried out by the Gwynedd Archaeological Trust.

A 3D computer model of the eroding fort generated from aerial photography will allow archaeologists to measure the rate of coastal erosion.

Future work will include gathering highly accurate (centimetre and sub-centimetre) 3D data to monitor the eroding cliff edge using techniques such as terrestrial laser scanning and drone survey.  This will provide an accurate baseline for future monitoring and with analysis of historical documents such as aerial photographs and mapping, the team hope to reconstruct as accurately as possible erosion rates over the past 150 years.  Coring and sampling in the surrounding area for palaeoenvironmental data alongside research of documents such as old newspapers and estate records will also reconstruct the past environment and weather history of the area.

The CHERISH project will be working closely with the National Trust who own the site. National Trust Llyn Operations Manager, Andy Godber said, ‘we are delighted to be part of this exciting project. Dinas Dinlle encapsulates the risk to our coastline from climate change. Our coastal adaptation policy for Dinas Dinlle is to accept the loss of this important site, being part of this innovative project allows us to learn more about the history of human occupation here, while we still can.’

CHERISH (Climate, Heritage and Environments of Reefs, Islands and Headlands) is a 5 year European-funded Ireland-Wales project between the Royal Commission on the Ancient and Historical Monuments of Wales, the Discovery Programme: Centre for Archaeology and Innovation Ireland, Aberystwyth University: Department of Geography and Earth Sciences and Geological Survey, Ireland. The project will receive €4.1 million through the Ireland-Wales 2014-2020 Programme and began in January 2017.

CHERISH aims to raise awareness and understanding of the past, present and near future impacts of climate change, storminess and extreme weather events on the rich cultural heritage of the Irish and Welsh regional seas and coast. It will be employing innovative techniques – terrestrial and aerial laser scanning, geophysical survey and seabed mapping through to palaeoenvironmental sampling, excavation and shipwreck monitoring – to study some of the most iconic coastal locations in Ireland and Wales.

Find out more about the CHERISH project here http://www.cherishproject.eu/en/ and for latest news and activities you can follow the project on Facebook @CherishProject and Twitter @CHERISHproj.