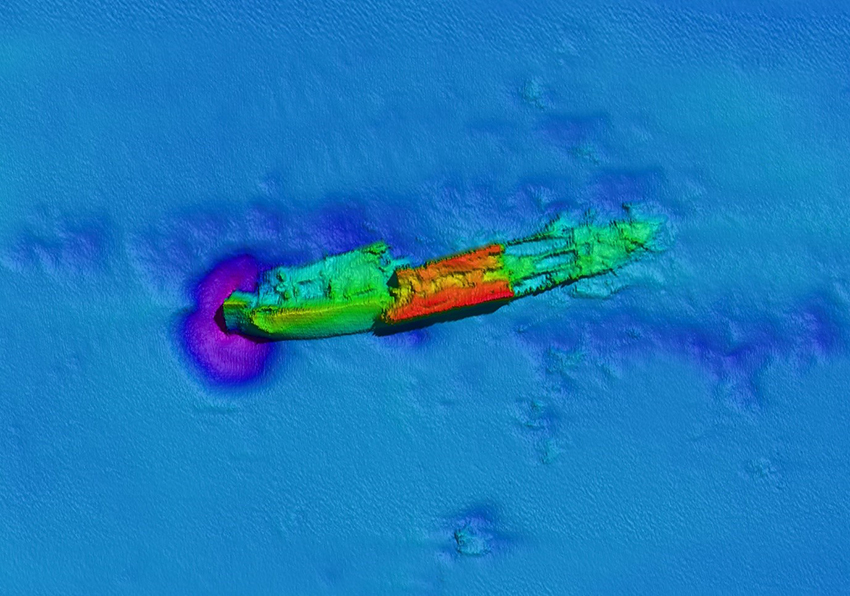 Commemorating the loss of the ORONSA

On 28 April 1918, the British cargo steamer ORONSA was passing through the Irish Sea as part of convoy HN62. On board were 110 passengers, 155 crew members, and cargos of nitrate and sugar. In the early hours, when the convoy was west of Bardsey Island, a German submarine initiated an attack.

What happened next is told on the Project’s new pages dedicated to the story of the ORONSA. You can find out the fates of the crew, the identity of the German submarine, and explore 3D virtual dives created from the underwater survey data.

A special collection of documents and photographs has also been collated on the People’s Collection Wales site.

The ORONSA’s crew on its last voyage included 22 Chilean and Peruvian mariners who had joined from the ORTEGA, another liner owned by the Pacific Steam Navigation Company. The ORTEGA became famous in 1914 after coming under fire from the German cruiser DRESDEN near the Magellan Straits. The captain had to chance all by setting a course for the Nelson Straits where it was too shallow for the DRESDEN to follow. Then, by sending the ship’s boats ahead to take soundings, the ORTEGA was brought through nearly 100 miles of narrow channels into Smyth’s Channel and thereafter to Rio De Janeiro. The ORTEGA’s service life ended in 1920, after the ship struck a sunken vessel (possibly a first World War loss?) off the coast of Wales. Contemporary accounts note that the ship was forced to steam into Fishguard harbour stern first dragging the damaged forepart of the vessel along the seabed. The crew at that time showed the same extreme calmness and professionalism in a crisis and all on-board were landed safely.

Further reading about the ORTEGA:

The ‘U-Boat Project 1914-18: Commemorating the War at Sea’ is a 2-year Heritage Lottery Funded partnership project led by the RCAHMW, with an overall value of £1M. The project is helping communities explore and retell the stories of forgotten heroes and provides unprecedented access, often for the first time, to wreck sites which are part of our first World War heritage.

We take this opportunity to thank National Lottery players who allow the Fund to invest money to help people across the UK explore, enjoy and protect the heritage they care about www.hlf.org.uk.