CBHC / RCAHMW > News > Cwmbrân: ‘Where the Future is Happening Now’ 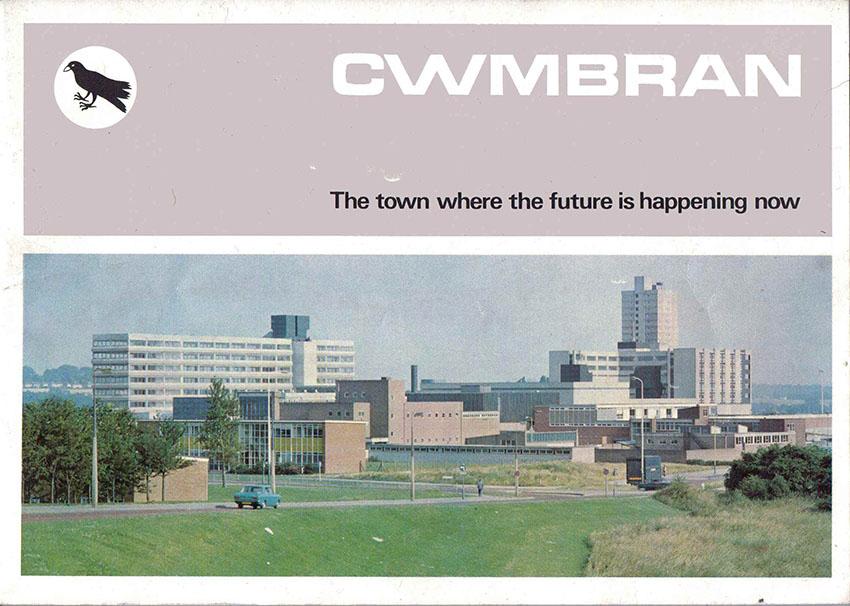 Cwmbrân: ‘Where the Future is Happening Now’

Cwmbrân is the only Mark I New Town in Wales and, as such, is both a fascinating and significant town representing an important phase in UK post-war town planning. It is also a town which has previously received little attention from the heritage sector in understanding its overall characteristics or individual sites and buildings and so, to this end, the Royal Commission has carried out an urban characterisation study, published as a digital document on our website this week.

New Towns originated in the garden cities of the early twentieth century. Rapid urbanisation led to planning for socially just and physically healthy societies through a combination of high-quality housing and jobs with open green spaces for industrial workers, embodied by the ideas of reformer Ebenezer Howard. While inter-war programmes of mass building overtook such ideals, Patrick Abercrombie’s 1944 Greater London Plan, advocating eight new towns around London, put such ideals back on the political agenda and in 1945 the New Towns Committee was created. The New Towns Act of 1946 enabled the designation of new settlements and the appointment of New Town Development Corporations.

Cwmbrân was formally designated a New Town on 4th November 1949 and the Cwmbrân Development Corporation (CDC) almost immediately established on 24th of the same month. In contrast to other New Towns, the purpose was to provide good quality housing, schools, and a well-designed town centre, serving those employed in existing industries of south-east of Wales who were having to commute considerable distances. The strategic Master Plan was published in March 1951, written by planning consultants Minoprio & Spencely & P. W. Macfarlane.

The town is laid out with a central shopping and civic area, surrounded by residential ‘neighbourhoods’ and zoned industrial areas. The neighbourhood system allowed for the creation of communities of c. 5,000 people, each provided with a core of shops, schools, health centres, community halls and places of worship. The neighbourhoods were large enough to be self-sustaining but on a scale that facilities would be within easy walking distance for all, and a community could be created between the new inhabitants. The work of CDC emphasised the use of new and innovative forms of construction and design.

Only one element of the New Town is currently listed and there are no conservation areas in Cwmbrân. As a highly important example of post-war urban planning and architecture, designed to provide an improved life for its inhabitants it is increasingly important to recognise and protect the unique characteristics of this Welsh town. The new publication is designed to inform a plan of future development which respects the qualities of the New Town, its historical background and heritage, and its physical environment and context. It is hoped that it will form a starting point for future investigation of, and discussion around, the place of Cwmbrân in the built heritage of Wales.

The Water Gardens were designed by the CDC Chief Architect Gordon Redfern as a key visual and recreational element of the Town Centre. His focus was on combining different textures in the form of hard landscaping and planting, with the sense of movement and sound created by running water. At the upper end a pool, containing an artwork created from Pilkington Glass, was fed by a horizontal water jet which was in turn led by a small ‘canal’ to the lower, sunken garden. With water cascading down the southern retaining wall, consisted of moulded concrete sporting abstract geometric form, and variety of trees and shrubs, this formed an area for busy shoppers and families to relax and socialise.

Monmouth house is one of the key buildings of the town centre, representing the CDC’s desire for mixed development, combining ground floor shops with luxury flats. Opened by Sir James Callaghan in 1967, one of its most remarkable features is the geometrically designed, moulded concrete relief to the external shaft. This was commissioned by the CDC from renowned post-war artist, William Mitchell, who specialised in large scale concrete murals and is a highly significant piece, forming the only large scale work of his known to remain in Wales. Smaller reliefs created by Mitchell can also be seen on sections of the revetting walls to the A4051 (Cwmbran Road).

The use of the neighbourhood system in Cwmbran ensured the residents of each area had easy access to a small, central ‘unit centre’ for their daily shopping needs. The Fairwater Centre served the south-west area of the town and contained eighteen shops, a health centre, dental practise, public house, and community centre. It was carefully designed by the Chief Architect, Gordon Redfern, to combat the exposed nature of the site with high sided units forming an enclosed space that would physically and mentally shield shoppers during their visits. A play area was created in the centre where it was visible from all the shops, making the shopping experience more enjoyable for children and their mothers.

The CDC built over 10,000 houses during its lifespan and Ty Newydd was the very first development created by them. Constructed in the new neighbourhood of Pontnewydd (named after an existing village) and named after the nearby Ty Newydd tinplate works, the scheme consisted of 48 houses, six flats and 10 garages. As a Chief Architect had not yet been appointed, Minoprio and Spencely (authors of the master plan) were asked to design the scheme. The result is reminiscent of the Garden Village movement, semi-detached, white rendered houses set along a curving avenue with short cul-de-sacs and a green. The importance of a sense of space was emphasised with wide grassy verges and the planting of trees and hedges.

Having searched for some years for a suitable site for a new County Hall to replace the 1889 building in Newport, the County Council finally chose a site in Croesyceiliog for the important new scheme. Designed by the practice of RMJM, it was constructed between 1969 and 1977 and occupied by the newly formed Gwent County Council. The imposing building with its terraced walkways was considered by many to be the finest of the new county halls but was demolished in 2013.

Responsibility for schools in the New Town stayed with Monmouthshire County Council as the Local Education Authority, but close cooperation was developed between them and the CDC. Many of the early schools were designed by the Monmouthshire architect’s department, who used the opportunity to create a ‘county style’. One of most prestigious educational projects was the Croesyceiliog campus, planned as two single-sex grammar schools, a secondary modern school, and a technical school. Only a co-ed grammar and the secondary modern were finally built but on opening in 1959 it was described as one of the best-equipped grammar schools built by any authority in England and Wales since the war. The partnership used the opportunity to promote the use of the new schools as adult education centres in the evenings to great success. The school was demolished, and replaced in 2019.

The retention and creation of open green areas for relaxation, recreation and exercise was important to the ideal of the New Town and to the CDC. As well as 22 hectares assigned for sports centres and industry playing fields, neighbourhood playing fields and playgrounds were assigned at 3.5 acres (104 hectares) per 1,000 of population. They also embarked on a major planting scheme across the town, and by March 1988 had planted a total of 40,557 trees and 699,097 shrubs. The most ambitious park created was Crow Valley Central Recreation Ground, Llanfrechfa, 57 hectares containing a boating lake, tea rooms, ponds, play areas, a golf course and Community Sports facility, all among extensive planting of trees and shrubs and considered by locals to be ‘an oasis in the middle of town’.

Gwent Square is one of two main squares within the pedestrianised Town Centre, at the heart of Cwmbran New Town. A such it was the heart of various schemes by the CDC to create an identity for the New Town, one of which was this set of three wonderful murals commissioned by them in 1974. Formed of cast concrete, they were created by artists Henry Collins and Joyce Pallot and depict the phases of history of the county of Monmouthshire/Gwent: Iron Age, Roman, Medieval, and Industrial. They are currently the only art work that is attributed to the couple in Wales.

Please join us tomorrow, Thursday 9 December at 5pm, for this year’s free online Christmas Lecture by Susan Fielding: Cwmbran: ‘Where the Future is Happening Now!’

This talk will be based on a free new digital publication: ‘Cwmbran New Town: An Urban Characterisation Study’ also by Susan Fielding. This will also be available tomorrow as a free eBook from our online bookshop.