CBHC / RCAHMW > News > Dambusters at the Elan Valley: the story of Nant-y-Gro Dam! 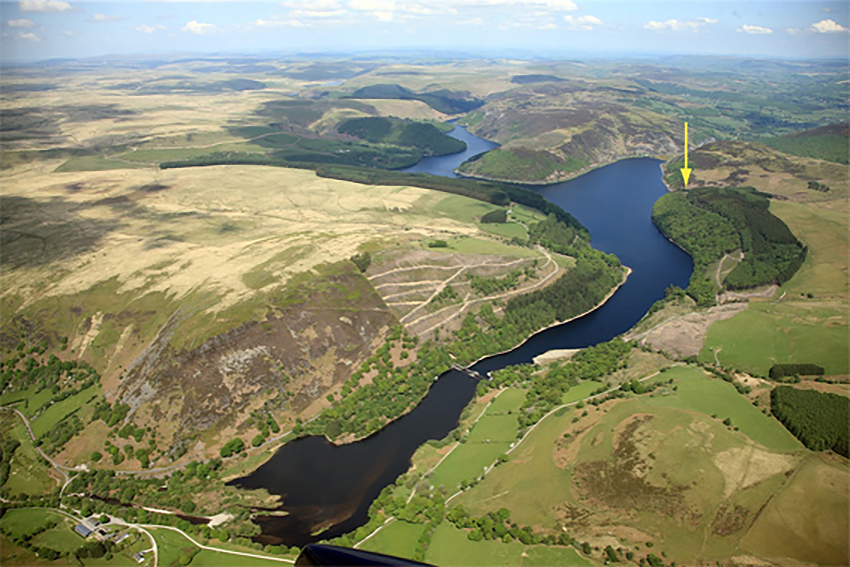 Dambusters at the Elan Valley: the story of Nant-y-Gro Dam!

Last night, the night of the 16 – 17 of May 2018, marks the 75th anniversary of the celebrated “Dambusters Raid” by aircraft from 617 Squadron led by Guy Gibson, when 19 Lancaster bombers took off from a runway in Lincolnshire in eastern England, each carrying a purpose built weapon – the bouncing bomb – and dropped them in Nazi Germany’s industrial heartland. This triumph was later immortalised in the 1955 film, The Dam Busters.

The idea for the Dambusters raid originated in 1940, when aeronautical designer Dr Barnes Wallis calculated the explosive power required to breach the Ruhr dams and discovered that no existing bomber could carry a large enough bomb. However, Wallis realised that smaller bombs accurately positioned at the foot of the dam could have the same effect. To make this possible, Wallis designed the “bouncing bomb” that would skip across the water and hit the dam. The bomb needed to be dropped at the right speed, at the right distance from the dam and at the right height above the water.

Unknown to many people today mid-Wales played a crucial part in the development of Barnes Wallis’ ingenious “Bouncing Bomb”.

In July 1942 the prototype charge was proof-tested at a small dam in the Elan Valley, where 280lbs of high-explosive destroyed the central portion of the masonry dam. The experiment was a complete success. The evocative and sobering remains of the bombed dam may still be seen today. The Nant-y-Gro Dam (NPRN 408280) is located at SN92196348, and is protected as one of Cadw’s Scheduled Ancient Monuments.

Did the aircraft actually practise here or did they just test the explosives?

Good morning, have always associated the dambusters with the Peak District, ladybower dam. Now I know differently and hope to visit your dam and do the walk.

A place I intend to visit for both the beauty, and historical value.