CBHC / RCAHMW > News > Digital Past 2016: Cynefin Is An Innovative Project To Digitise All The Tithe Maps Of Wales 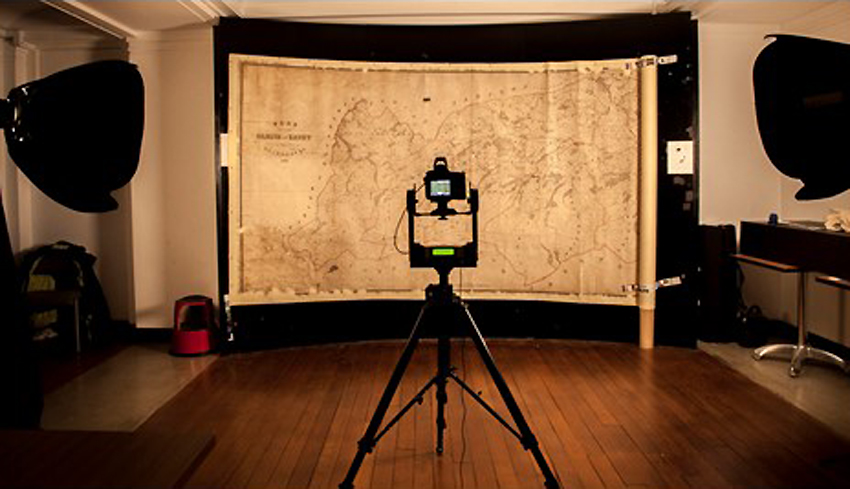 Digital Past 2016: Cynefin Is An Innovative Project To Digitise All The Tithe Maps Of Wales

Cynefin is an innovative project to digitise all the tithe maps of Wales. It is funded mainly by the Heritage Lottery Fund, and is run by Archives Wales. Most of the work is done at the National Library of Wales (NLW) using their near complete collection of tithe maps, and involves a considerable conservation effort.

The digitisation is carried out using a special technique whereby the large maps are mounted on a magnetic curved wall and photographed in high resolution. This brings excellent results in terms of image quality, 800 maps have already been digitised out of an estimated total of 1200.

The map images produced are all online on the cynefin.wales website, alongside images of all the tithe apportionment documents. To obtain full value from this resource the website includes functions to crowdsource the transcription of the maps and documents, with the aim of making all the data searchable. This complete collection of digitised tithe maps provides a great opportunity to look at Wales in the 1840s in a more holistic way than was previously practical. It is not just noticing some railways on a map, you can see exactly the pattern of railway development. You can visually see that the Taff Merthyr railway was already built, and the others, going east-west, were in progress. There were some other very old railways in Llanelli, Swansea and other industrial areas, which have since disappeared. There was also a canal network and roads controlled by tollgates. This can all now be examined fluently using the digital tithe map of Wales.
The wealth of information already transcribed has huge potential for research and connections to other archival material. The nature of society is revealed, the way it was assumed most people didn’t own the land where they lived. These landowners, few in number, were the people who mattered, for example they were virtually the only people allowed to vote. It was the time of the Chartist and Rebecca risings.

The project focuses on usability and feedback from users, and has strong volunteering and marketing aspects, which aim for attractive and sustainable solution bringing long-term benefits.

The project includes partners in archives across Wales and will be providing output to People’s Collection.

The final website at NLW is a geographic interface, which will be flexible enough to display other parts of the Library’s collection, transforming access and research opportunities.