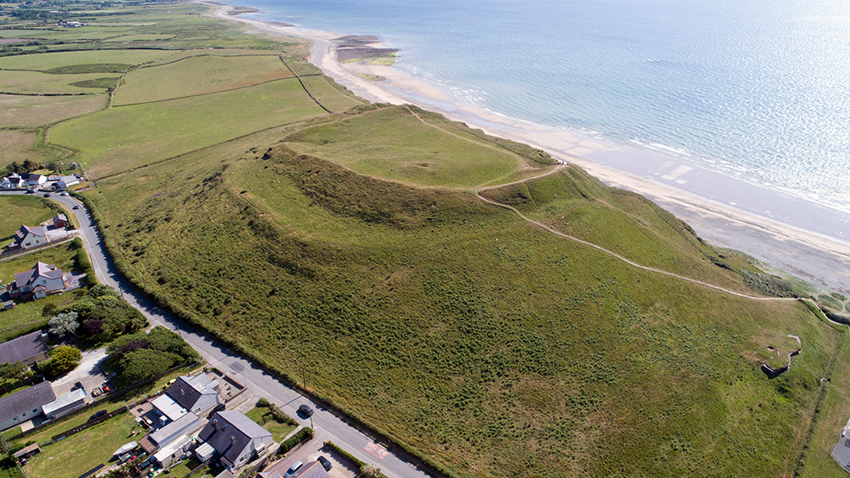 Dinas Dinlle coastal hillfort is owned by the National Trust. It is set on a hill of glacial drift sediments (specifically a thrust-block moraine) overlooking the sea and Caernarfonshire coastal plain. The hillfort and Second World War seagull trench on the northern slopes of the fort are protected as Scheduled Monuments by Cadw and the hill is a Site of Special Scientific Interest (SSSI), designated for the importance of the glacial sediments, clearly seen in the exposed sections of till, sand and gravel in the cliff face. These deposits result from ice re-advance from the Welsh ice cap towards the Irish Sea Ice Stream during deglaciation at the end of the last glaciation, known as the ‘Devensian’ period, some 12,000 years ago. It is hoped that direct dating of these sediments using Optically Stimulated Luminescence dating (OSL) should reveal just how long ago these sediments were laid down.

1. How old is the hillfort?

Little is known about the monument. It is thought to be later prehistoric (Iron Age) in date but chance finds of Roman coins, an intaglio (a carved gemstone worn in a ring) and pottery suggest occupation in the Roman period. There is a possibility that the prominent, squarish stone mound inside the fort is the remains of a building or tower; could it be a Roman pharos or lighthouse? Early medieval occupation of this prominent site is also very likely; Dinas Dinlle takes its name from one of the Welsh legends of the Mabinogi and the story of Math mab Mathonwy and Lleu Llaw Gyffes, who gave his name to the hillfort Dinlle (‘din’ in old Welsh meaning fort and ‘Lle’ short for Lleu).

In the early 20th century the hillfort formed part of a golf course, whilst during the Second World War a pill box, seagull trench and observation post were constructed on the northern slopes to protect nearby RAF Llandwrog – now Caernarfon Airport.

3. How much of the fort has been lost over the centuries?

Early maps and the curve of the surviving hillfort defences suggest that it was once entirely enclosed but today the majority of the western defences have been lost to the sea following years of erosion. It is difficult to say precisely how much of the hillfort has been lost since its construction but measuring cliff top positions using Ordnance Survey mapping we calculate that between 20 to 40 metres of the western side has been lost since 1900. Assuming that future rates of erosion will be higher than those observed over the last 117 years, due to climate change, Dinas Dinlle could be completely lost within 500 years.

4. Reconstructing the past environment at Dinas Dinlle – A wave-washed hillfort in late Iron Age times?

Exposed peat deposits in the intertidal area on the foreshore around 100m west of the foot of the cliff below Dinas Dinlle hillfort date from around 4,000 years ago (Bronze Age) and confirm that a brackish-freshwater deltaic environment existed here at that time, with the sea estimated to have been around 1km away. The presence of the peat also provides us with a maximum extent of the glacial hill upon which the fort was constructed, and as sea levels flooded this former environment so erosion of the glacial sediments began.

Ongoing work by Birkbeck, University of London, with Aberystwyth University and CHERISH to date the sand spit of Morfa Dinlle north of the fort (using OSL/Luminescence dating) suggests it only dates back to Roman times. This means that the sea – or salt marsh – may have extended from the northern foot of Dinas Dinlle (where the village is now) in the later Iron Age.

The CHERISH team have also been coring and sampling in the surrounding former wetlands to the east of the hillfort and initial results are promising. Sediment cores have been obtained from 2 locations to hopefully provide a palaeoenvironmental context for the occupation phase of the fort. Radiocarbon ages suggests the record extends back around 3,000 years and work is on-going to look at the vegetation and hydrological histories.

5. How is climate change effecting the site?

The recently published UK Climate Projections (UKCP2018) provides the most up-to-date assessment of how the climate of the UK may change over the 21st century. The continuing trends are:

The outcome of these trends is wide ranging – rising sea levels; the migration and proliferation of pests, diseases and invasive species; the drying out and desiccation of soils; flooding and more frequent storms –all present significant challenges and impacts to Dinas Dinlle.

The effects of the sea: Rising sea-levels and storm surges will lead to increased erosion of the cliff face and monument.

The effects of intense rainfall and drought: Recent observations after periods of intense rainfall show that sub-surface water flow is pushing off the front of the cliff face in places. Sub-surface flow could lead to mass movement events, while the southern ditches of the hillfort would appear to route some overland and sub-surface flow towards the cliff face in times of high rainfall; the ditches effectively act like gutters.

More intense rainfall with climate change could increase this erosion, coupled with periods of more intense drought which desiccate the fragile coastal soils leading to wind erosion and the creation of cracks which allow the formation of natural soil pipes under the surface.

The southern hillfort ditch before (left) and after (right) fresh cliff collapse, recorded on 14 Feb 2019, exacerbated by intense rainfall funnelling water along the fort’s ditch

6. What is CHERISH doing at the site:

Dinas Dinlle is a baseline monitoring site for CHERISH. This work has included gathering highly accurate (centimetre and sub-centimetre) 3D data to monitor the eroding cliff edge using techniques such as terrestrial laser scanning and UAV/drone survey. This will provide an accurate baseline for future monitoring and with analysis of historical documents such as aerial photographs and mapping, will reconstruct as accurately as possible erosion rates over the past 150 years. Repeat monitoring visits by CHERISH and a team of dedicated local residents will also see how seasonal and storm impacts are affecting the monument.

7. Investigations to improve our knowledge of the hillfort 2017-2021

As well as monitoring Dinas Dinlle, CHERISH Project work is also about increasing our knowledge and understanding of it. In the area around the hillfort, sediment coring from the surrounding wetlands and luminescence dating of the sand spit at Morfa Dinlle will help reconstruct past environments and climate change (see above) using the physical, biological and chemical evidence trapped within layers of sediments.
At the monument itself, new earthwork and geophysical surveys have greatly increased our understanding of the archaeological remains with numerous possible roundhouses and other anomalies identified within the interior of the fort and the field to the south; these are the focus of the August 2019 excavation.

Under full supervision and following months of planning and training, in early June 2019 CHERISH archaeologists and geographers from the Royal Commission and Aberystwyth University carried out investigations to record and date features exposed in the eroding cliff-face, including the southern hillfort ditch exposed during the cliff collapse in February 2019. The southern ramparts were also cored to find out more about the hillfort’s construction.

Initial results have been extremely interesting, bringing into question the way in which Dinas Dinlle was constructed. Both the cliff-face investigations and coring yielded very little in the way of archaeological remains which was unexpected. Even the southern ditch appears to have not been ’built’ but formed naturally through complex hydrological processes during the end of the last glacial period around 12,000 years ago. Stony material discovered through coring the ramparts does however suggest some construction, meaning the people responsible for building Dinas Dinlle could well have exploited pre-existing natural features to steepen the slopes and accentuate their constructed banks.

Perhaps the existence of natural ‘ramparts’ and ‘defences’ – coupled with a prominent coastal position – first attracted prehistoric settlers to the site?

wow, what wonderful work you have been doing, I hope you can record as much as possible before more of it erodes