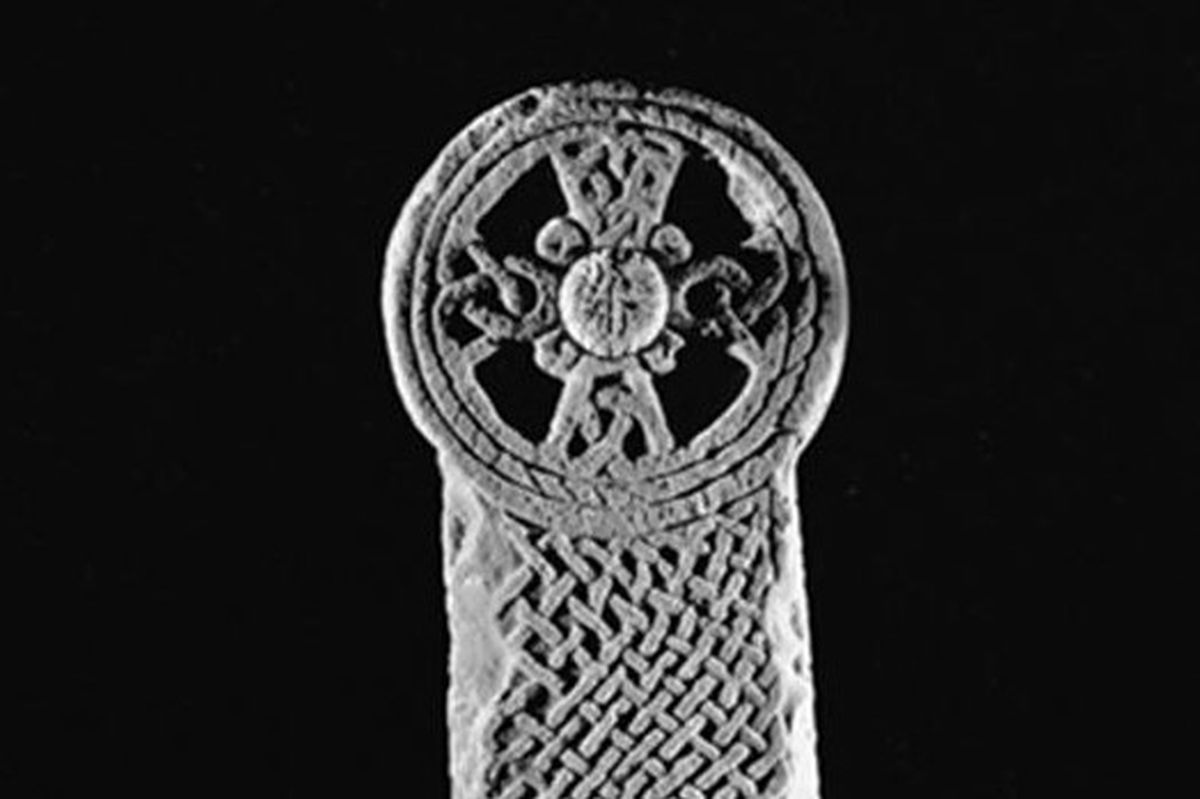 Over 500 early medieval carved stones are now known from Wales. Almost all are Christian, indicating the course of conversion and the foundation of powerful monasteries and burial in cemeteries linked to local farming communities.

From the late eighth century onwards, as the Church became more powerful, large decorated stone crosses were also erected, mostly on monastic sites, but sometimes in the open countryside.

During the late 1990s and early 2000s, Iain N. Wright, then the Royal Commission’s photographer, took a series of fine black-and-white photographs to record these monuments and they now form part of the Corpus of Early Medieval Inscribed Stones Publication Collection. Many were published in the three volumes of A Corpus of Early Medieval Inscribed Stones and Stone Sculpture in Wales, published by the University of Wales Press in association with the Royal Commission and the National Museum of Wales (2007—2013).

I am fascinated by early medieval inscribed and sculptured stones in Wales and have chosen three photographs illustrating a few of my favourite early medieval carved stones. The carving is now often quite difficult to see because of weathering so many were taken at night with special lighting.

This fifth-century memorial stone stands in the churchyard of St David’s Church, Bridell, Pembrokeshire. It is inscribed using the Old Irish ogam alphabet. Each letter consists of one or more strokes carved across the angle of the stone from bottom to top. The inscription reads: Nettasagri maqi mucoi Briaci and commemorates a man called Nettasagri who was the son of the kin of Briaci. Originally it would have marked his grave. The inscription is important as it is one of a group concentrated in south-west Wales that testify to the settlement of people from Ireland in the early fifth century. Up to around AD600 Irish was still being spoken in some parts of Wales alongside British and Latin. The cross in the circle was added later and was probably made with the aim of Christianizing the monument and perhaps the person commemorated.

This monument dates to the ninth century. It now stands in St Cadfan’s Church, Tywyn, Gwynedd, an important early medieval religious foundation. The stone originally stood in the cemetery and was first recorded by the famous Welsh polymath Edward Lhuyd in 1698. It is unique as it is the only early medieval carved stone to have inscriptions in Welsh, as Latin was the usual written language of Christianity. All four faces have commemorative inscriptions with crosses marking the beginning of two of these. It is difficult to give exact readings of the inscriptions, but they principally commemorate two women, Tengrumui wedded wife of Adgan, and Cun wife of Celen. At this time the commemoration of women is highly unusual, and it is possible that Welsh was considered a more appropriate language than Latin for this purpose. Another unique feature is the phrase tricet nitanam, meaning ‘a mortal wound remains’, an expression of grief by a man on the loss of his wife. It was more usual in Latin inscriptions to make a formal request for a prayer for the soul of the person commemorated.

This cross, popularly known as Maen Achwyfan (St Cwyfan’s Stone), dates to the tenth century. It stands in a field near Whitford, Flintshire, possibly the site of an early meeting place. Its form and decoration are of Viking type and it has links with other crosses along the north Welsh coast as well as in Chester and on Wirral. The cross is carved with panels of plait-work, interlace knots and other patterns, but also human figures and animals, which may be interpreted as scenes from pagan Norse mythology, the only scenes of this kind found on early medieval sculpture in Wales. Towards the bottom of the cross is a panel showing a man surrounded by a border of looped strands, possibly representing waves or water. He is a warrior armed to the teeth with a battle-axe, a distinctively Viking weapon, a spear, with a sword in a scabbard at his waist, and to his left is a serpent. Although we cannot identify a specific story, heroic scenes from pagan Norse mythology became popular on Christian sculpture in areas of Viking settlement, particularly in northern England, and would have appealed to Scandinavian settlers who had only recently become Christian.

By Professor Nancy Edwards, Chair of the Commissioners, RCAHMW

Utterly fascinating, thank you. As a volunteer at Carmarthen County Museum (not presently in situ,sadly) I’m researching a large stone recently re-discovered in the Museum’s grounds; it has a small, simply-carved head on it. Could I contact Professor Edwards in the future, to possibly get her opinion upon it please?

Thank you for getting in touch Carolyn. Please send any information you have on the stone to our Enquiries Team who will be happy to pass it on to Professor Edwards. No doubt Professor Edwards will then get in touch directly. It sounds fascinating.
﻿
Their email address can be found on our Contact page: https://rcahmw.gov.uk/about-us/contact-us/