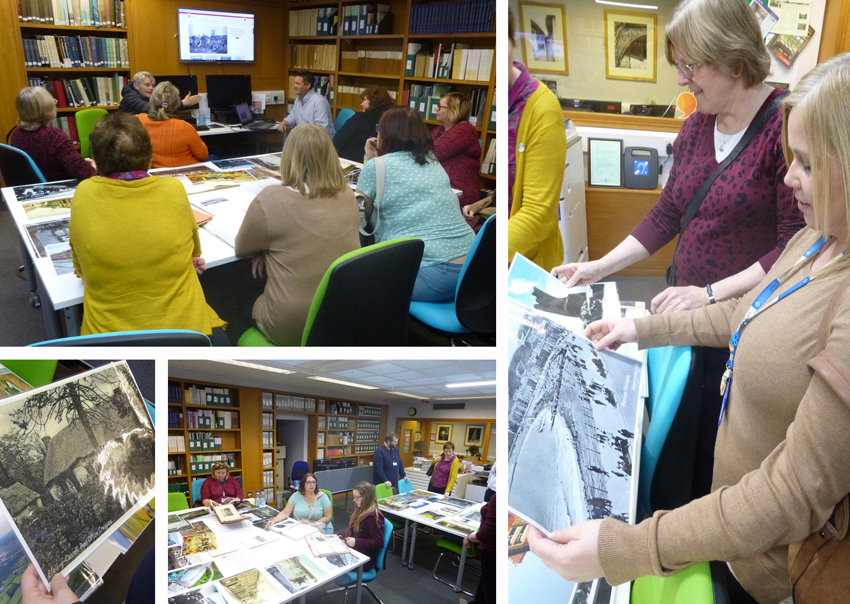 Explore Your Archive: Memory Archive – Account of the day

On Wednesday 22 November 2017 the Royal Commission on the Ancient and Historical Monuments of Wales, in partnership with Aberystwyth University School of Art, held an event exploring how archives can be used as a source of material to create activities, walks, stories and artworks to help stimulate reminiscence and memory for those living with dementia. Around fifty healthcare professionals and people caring or working with people living with dementia came together in Aberystwyth to listen to speakers and take part in workshops. 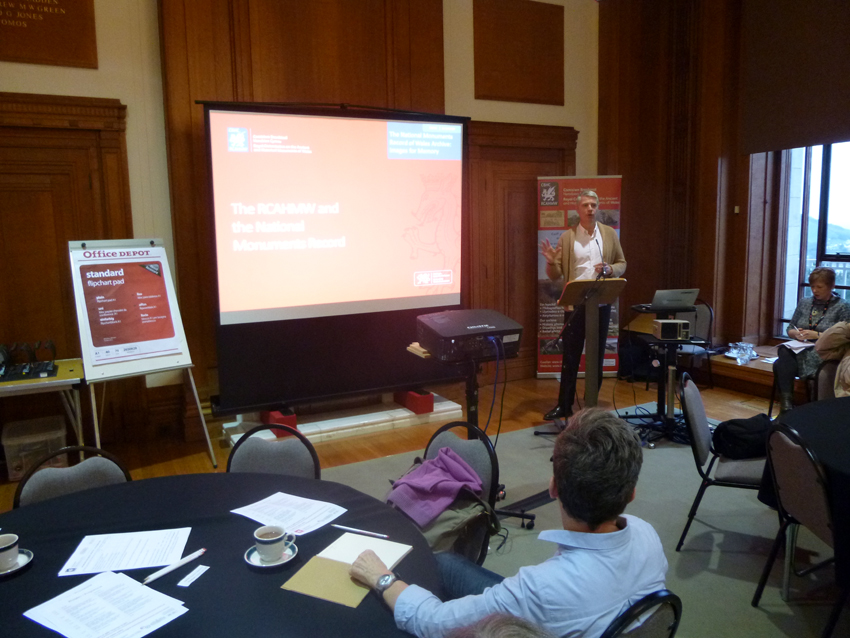 Gareth Edwards, Head of Knowledge and Understanding at the Royal Commission, kicked off the day showing delegates the countless treasures held in the Commission’s archive, the National Monuments Record of Wales (NMRW). Of particular interest in terms of memory and reminiscence are the many historical postcards held in the archive. The NMRW covers the whole of Wales, and street scenes, iconic sites, chapels and sea sides may hold dear memories and associations. Other special collections in our ‘Memory Archive’ include tourist brochures and people pictures in the Central Office of Information Collection; illustrations and street scenes of industrial Wales in the Falcon Hildred Archive; underground, surface and people photographs of collieries from the 1970s and early 1980s in the John Cornwell Collection; black and white photographs and postcards of stations and halts by railway enthusiast Rev. H. D. E. Rokeby; and our fantastic collection of aerial photographs. Not only are these images beautiful to look at, they also record the considerable changes that places have undergone in the last century. 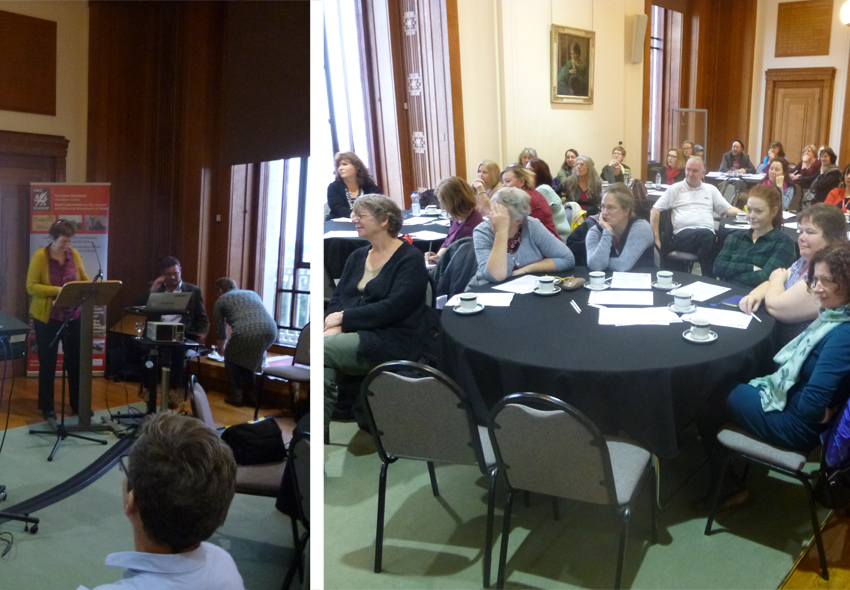 Next up was Sally Corlett, Dementia Co-ordinator at the Hywel Dda University Health Board, who enlightened the audience with facts, myth busters and sound advice. Dementia, she explained, is not a natural part of aging or a mental health problem; it is a disease that kills off brain cells. The cause is still unknown, as is the reason why women are disproportionately affected. There are certain protective factors, however, such as further education and being socially active. While dementia is not just about losing your memory, this element has a significant impact on people. To use Sally’s words, our memories are our stories. They are personal and closely bound up with our sense of identity. Reminiscence is a powerful tool, therefore, as it changes the balance of power. People living with dementia can talk about something again (from the past) which helps them feel well. And perhaps most illuminatingly, even when the factual memory disappears, the emotive memory does not. In other words, it is always worth spending time and reminiscing with people living with dementia. While afterwards they may not remember what they did or said, the positive feeling remains. 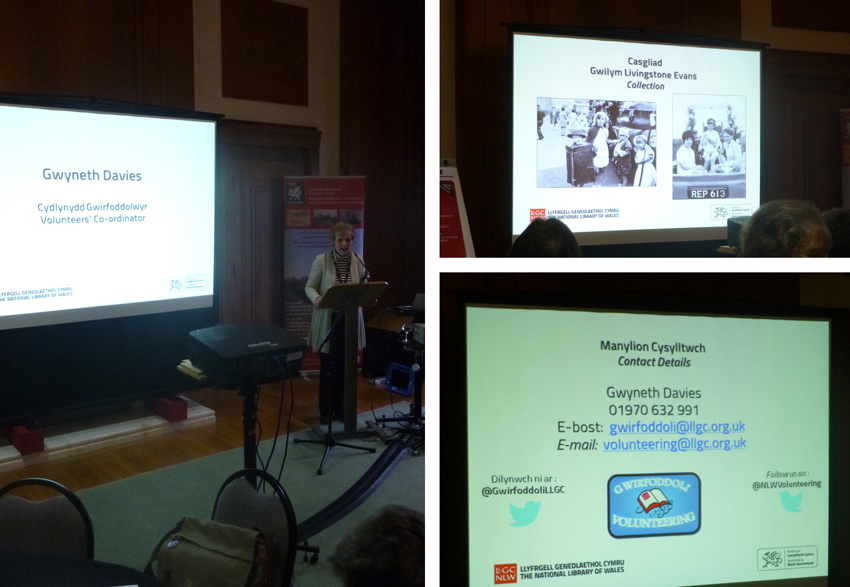 The third talk of the morning was by Gwyneth Davies, Volunteer Co-ordinator at the National Library of Wales. She presented the outcomes of the pilot programme ‘Living Memory’. Through this programme, volunteers collated material from the National Library collections based around agreed themes (animals, rural, shows, schools, war, religion, fashion, weather, famous, miscellaneous and Eisteddfodau) for use in the health sector. The material was made available in three different formats: hardcopies, films (on DVDs) and e-books (on tablets). While the tablets – kitted out with a chunky blue frame which was easy to hold and see – were considered useful for bed-bound patients, they were least popular overall. The films, in turn, were deemed most helpful for use with groups. But the hardcopies were the most popular overall. Gwyneth asked the audience for feedback on the best way to develop the programme further, and drew their attention to another relevant source: the National Library’s list of films from ‘Britain on Film’ (BFI) which may be suitable for memory therapy. 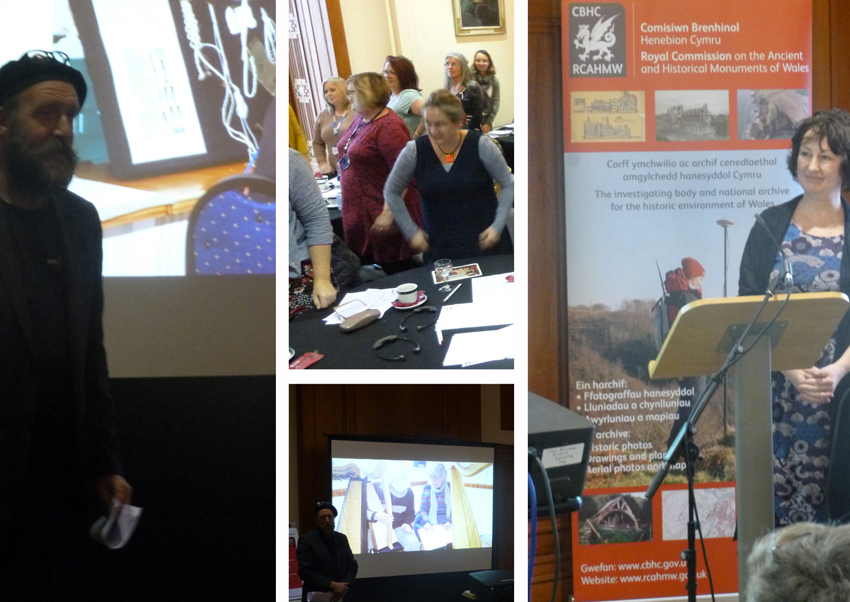 Mike Hotson and Sara Wentworth from arts4wellbeing closed the morning with a session on heritage and wellbeing in rural communities. Arts4wellbeing is an innovative training organisation harnessing a fusion of creativity and personal development to improve lives in communities across Wales. In response to the question what they wanted, people in rural communities asked for somewhere to meet new people, something to do and knowing who lives in the village (thus increasing their sense of safety and connection). The emphasis of arts4wellbeing is on intergenerational storytelling, creativity and laughter, of which there was plenty in the National Library’s Council Chamber.

Delegates found themselves being asked to stretch out and yawn, shake hands with people they had not met therefore, and listen to wonderful stories about people coming out of their isolation through music, human connection and stroking a dove!

The lunch break provided an opportunity to visit the Royal Commission’s Library and Search Room to view archive material and see a demonstration of how to access our resources using Coflein, WelshChapels.org and People’s Collection Wales. Helen Rowe and David Thomas had to delve deep to identify material in response to queries from delgates, mostly with success, and Lynne Moore, Rhodri Lewis and Ywain Tomos were able to show off some of the highlights of our collection and library. 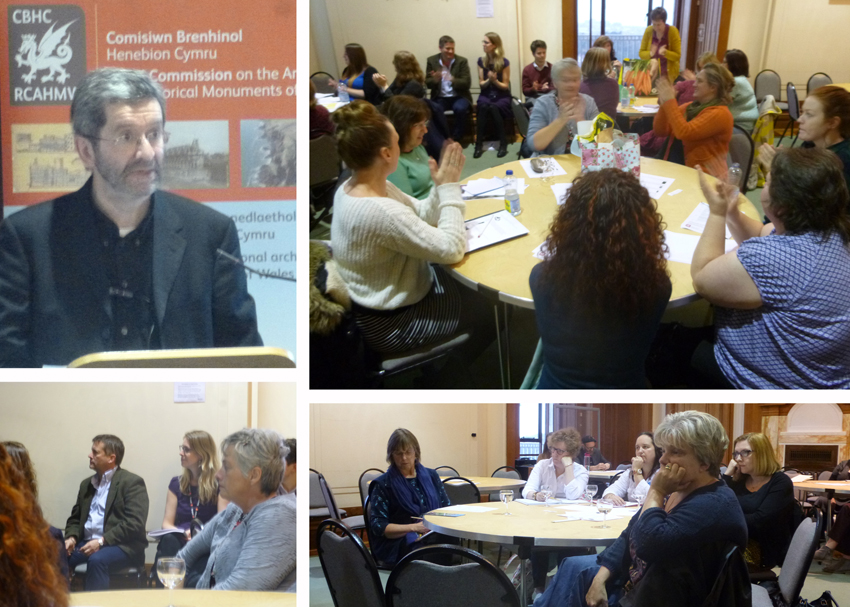 After lunch, it was time for Aberystwyth University School of Arts to facilitate the afternoon. Professor John Harvey spoke about memory in relation to dementia, and invited attendees to his sound-artwork, I. Nothing. Lack., taking place in Bethel Welsh Baptist Church, Aberystwyth, on 24 November 2017. This ‘sonic intervention’ addresses the themes of remembering and forgetting. He then described the brief that the MA students had been given in preparation for this day – with the key objective to design and run workshops to find innovative ways for health professionals and carers to use material from the National Monuments Record of Wales, the archive of the Royal Commission, to help those living with dementia – and introduced the six students. 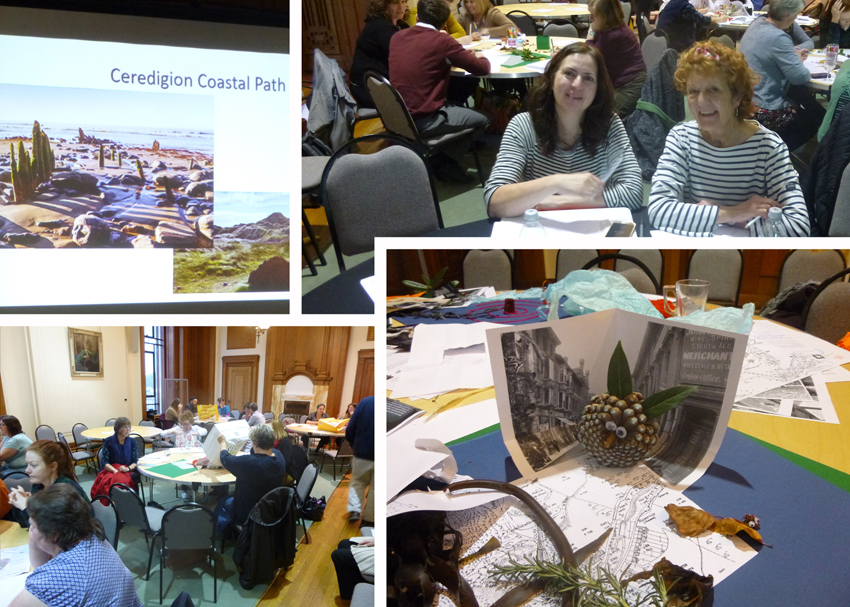 Sarah Spencer and Bridget Bailey suggested three walks (around the Hafod Estate, Aberystwyth Town and the Ceredigion Coastal Path) that can be used to increase health and wellbeing, invoke memories and provide material to create, for example, a memory box or collage. They had brought wonderful examples of memory boxes created by students from Ceredigion College, and attendees were asked to unleash their own creativity on the materials provided. 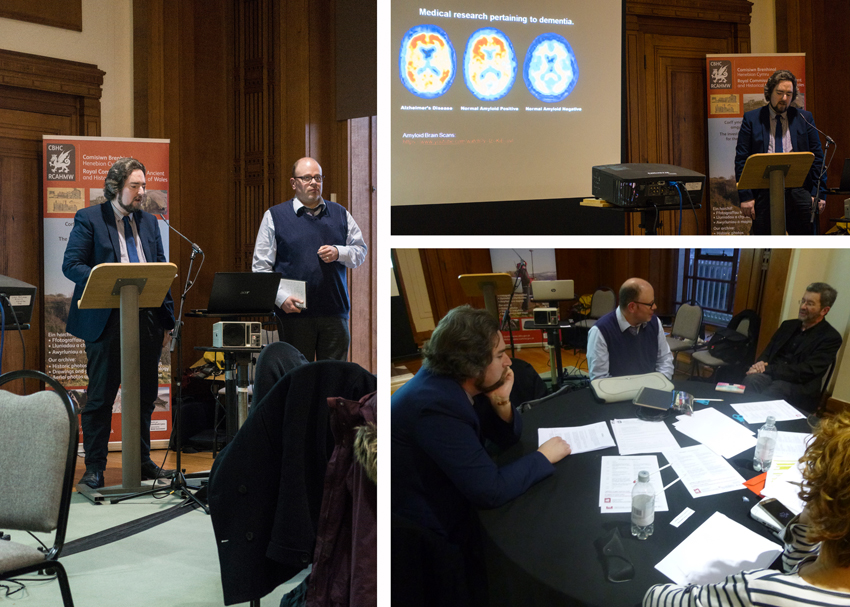 Simon Tune and Vin Forde presented some of the latest medical research as well as the way in which gaming and virtual reality is used to learn more about dementia. They showed how an aerial photograph can become a tool for intergenerational discussion and connection, with interviews recorded as short clips. Similarly, smartphones are now able to create 360° views of photos or drawings using free and easy to use software. 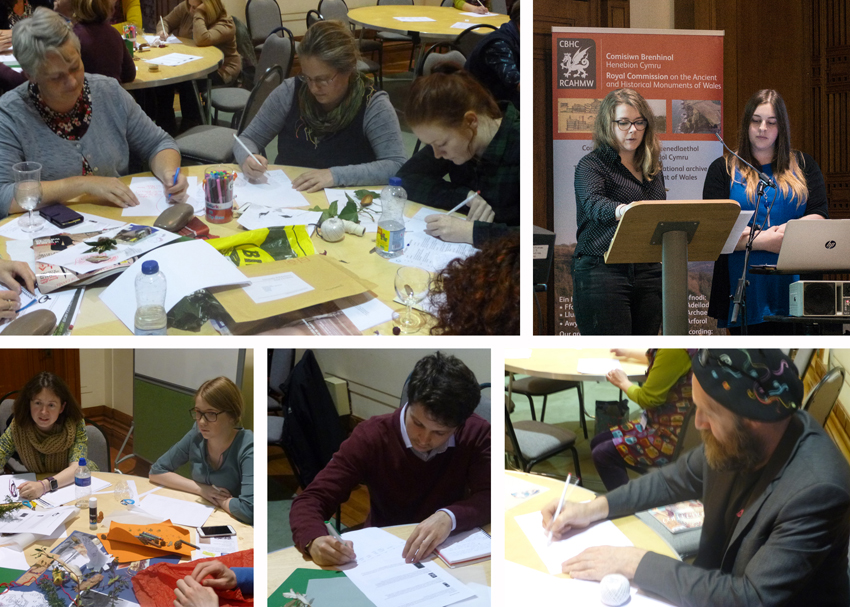 Ellie West and Carmen Reid had created a virtual timeline, which encompassed images, music and recordings from the NMRW archive and People’s Collection Wales. Focusing on iconic buildings and events, they showed how dipping in and out of history can trigger memories and associations. The timeline does not have to be or stay virtual, it can also be made into a physical book or artwork. Delegates enthusiastically created their own timelines, taking a particular decade as their focal point.

The event was concluded with a short feedback and evaluation session, where delegates identified the ideas they would most likely explore further or take back to their workplace. The consensus was that human connection was at the heart of wellbeing, for everyone but especially for people living with dementia.