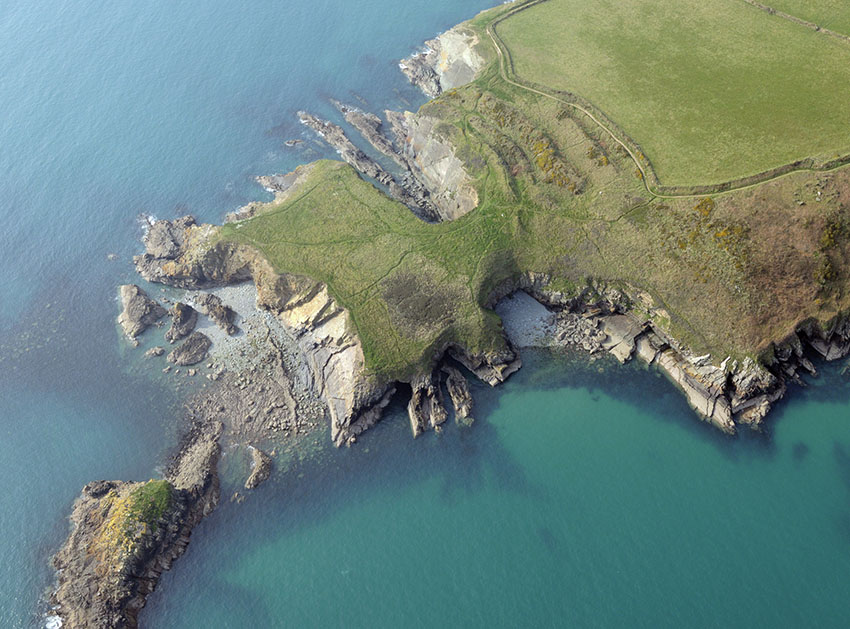 Wales’s coastline stretches for around 1,680 miles (2,700 km). Along its length it includes large estuaries, tidal rivers, extensive sandy beaches, rocky cliffs, and offshore islands. It is a coast rightly famed for its natural beauty and striking scenery, as well as its rich flora and fauna. But Wales’s coastline has also been shaped by people. Traces of human activity are preserved in the archaeological remains that can be found along the Welsh Coast and which date from prehistory to the present day.

In some parts, where peat deposits are exposed, it is possible, quite literally, to follow the footsteps of our prehistoric forbears, or to pick your own way through the preserved stumps of now submerged forests. In other places the remains of ships lie cast on the shore, protruding from the sand, reminding us of the perils faced by past sailors and travellers. Permanent structures have been built on the shoreline; fishtraps to provide a harvest from the sea, or maybe lime kilns to help gain a better harvest from the land. Harbours and havens abound, with almost every bay, creek, inlet, cove, or river having been used in the past for some form of activity.

Much of the Welsh Coast is publicly accessible, either directly at one of its many beaches, promenades, or small historic harbours. Or alternatively by walking the Wales Coast Path, which itself runs for 870 miles (1,400 km) and allows a continuous journey from the Dee Estuary in the north to the Severn Estuary in the south (or the other way if you prefer!). The Wales Coast Path celebrates its 10th anniversary in 2022 having been officially unveiled on May 5 2012.

The Royal Commission has contributed to the newly launched Wales Coast Explorer mobile phone App. to help people discover and learn more about the coastal and inter-tidal archaeology of the Welsh Coast. The App. provides information on different types of archaeological sites, from shipwrecks to submerged landscapes, as well as highlighting over sixty sites, with more to be added, that can be easily accessed from the Wales Coast Path. It draws on information and images available on Coflein, our online database.

The Wales Coast Explorer App. also allows users to report any new or unexpected archaeological sites that they see. Public reporting when archaeological remains are newly exposed, or suddenly appear/disappear, is a critical part of how we manage our shared cultural heritage. After all, 1,680 miles of coastline is a lot to keep an eye on!

To celebrate the success of the Wales Coast Path enjoyed by hundreds of thousands of walkers of all ages every year, we are offering a special birthday discount of 10% on our award-winning publications, Wales and the Sea: 10,000 years of Welsh Maritime History and Cymru a’r Môr: 10,000 o flynyddoedd o Hanes y Môr. When ordering from the Royal Commission’s online bookshop (shop/rcahmw.gov.uk), please enter the code LLAC10 at the checkout. The total price is only £22.50.