Featured Shipwrecks for the Year of the Sea: Unlucky Elfin, unlucky Resurgam

One hundred and thirty seven years ago, bad weather would end Reverend George William Garrett’s dreams of building a submarine for Royal Naval use. 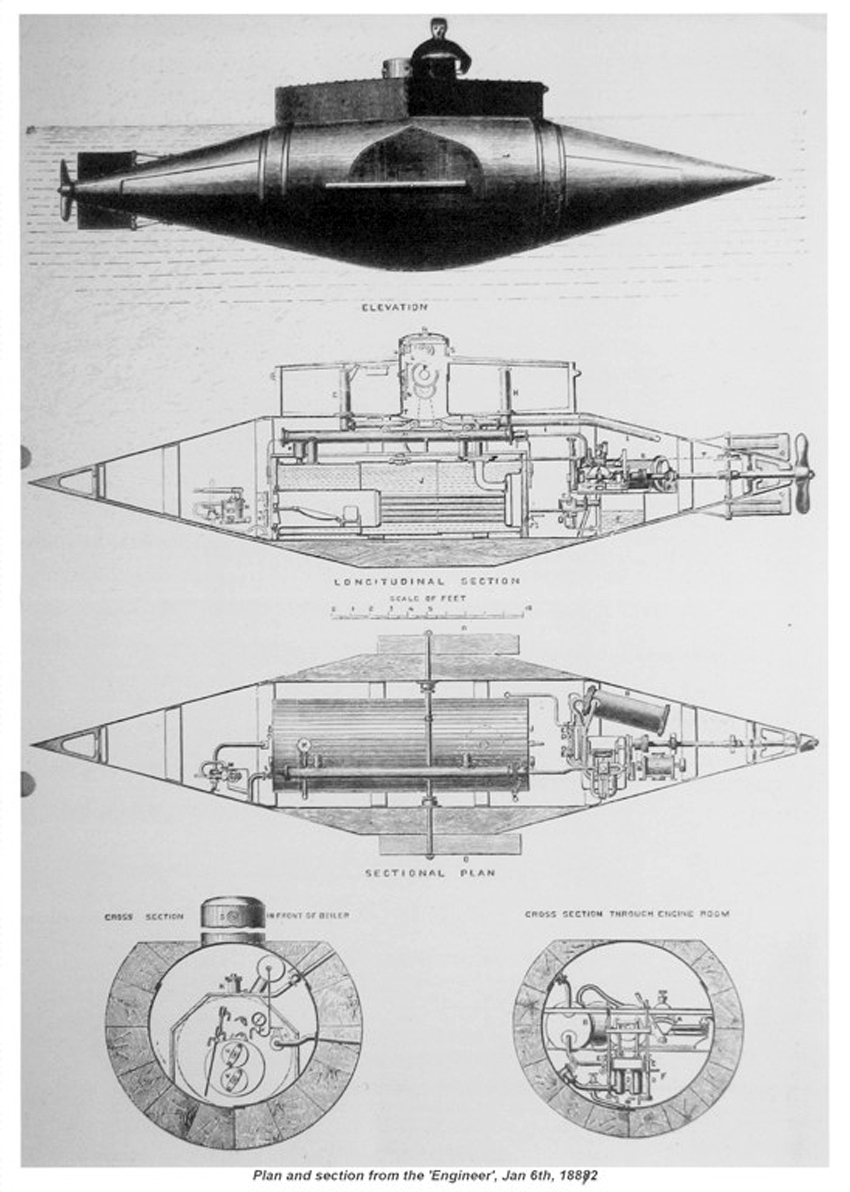 The engineering drawings for the Resurgam which appeared the in The Engineer on 6 January 1882.

In 1878, he had set up the Garrett Sub-Marine Navigation and Pneumatophore Company Ltd. His ideas sprung from an event in the Russian-Turkish war of 1877, where the need for a vessel that could go under protective chain netting to destroy warships was identified. The Royal Navy requested a prototype and his first design nick-named `The Egg’ was tested in Liverpool Docks in July 1878. This success led him to design and have built the RESURGAM (using J T Cochrane, Britannia Ironworks, Birkenhead) at a cost of £1538 in 1879.

On 10 December 1879, the RESURGAM left Birkenhead for naval trials at Portsmouth under its own power but only got as far as Rhyl. After repairs, RESURGAM set out again with Garrett employing the steam yacht ELFIN to tow the vessel. Both vessels left Rhyl at 10 pm on 24 February 1880, but off Great Ormes Head in heavy seas, the Captain of the ELFIN had to ask the crew of the submarine to assist in mending the ELFIN’s bilge pumps. A boat was sent to bring them aboard, and Rev George Garret and his fellow submariners, Captain W. E. Jackson and George Price, boarded the ELFIN whilst repairs to the yacht were carried out. The tow resumed, but the gale worsened through the night. At about 10 am next day the hawser parted and the submarine subsequently foundered. The danger to the ELFIN had not passed. The steam yacht turned back for the River Dee and anchored off Mostyn, but then the wind changed and she parted her anchor cables and went adrift. The tug IRON KING went to the yacht’s rescue but in difficult conditions rammed the yacht. The yacht sank and also became a total loss.

From the collections of the Royal Commission – a diver from the Archaeological Diving Unit exploring the wreck of the submarine in 1997.

Oh dear, somewhat disturbingly I recognise myself as that diver !