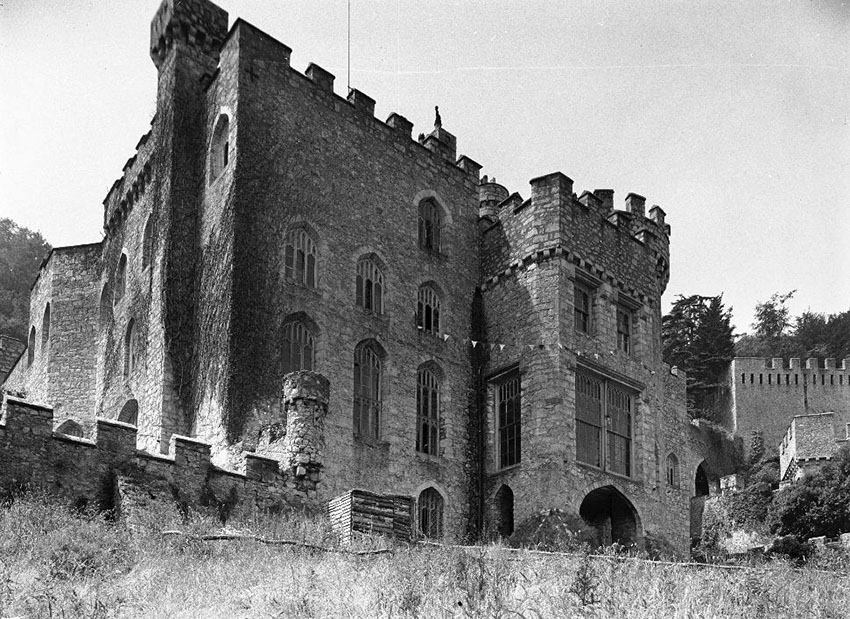 The magnificent Gwrych Castle, on the north Wales coast is an outstanding example of an early nineteenth-century picturesque Gothic castle designed to look like a rambling medieval fortress.

The deliberately contrived ‘stage scenery’, with its crenellated walls, towers and revetments, is the perfect setting for this year’s ever-popular and theatrical reality show I‘m a Celebrity Get Me Out of Here usually based on the New South Wales coast in Australia.

The Royal Commission is pleased to be associated with the Gwrych Castle Preservation Trust who are restoring the grounds and castle. The Commission’s unique collection of historical images has been informing the Trust pioneering community restoration project.

The castle was begun c.1812 and was more-or-less complete by 1825. An engraving of the finished castle (if it can be said to have ever been finished!) was made for Gastineau’s Wales Illustrated in 1831.

The full extent of Gwrych Castle in its heyday can be fully appreciated from the Royal Commission’s historical aerial photographs. This image from our Aerofilms Collection was taken in 1932.

The Aerofilms Collection is a unique archive of 1.26 million negatives, dating from 1919 to 2006, providing an unparalleled picture of the changing face of Britain in the twentieth century.

This captivating but undated image of Gwrych Castle is one of two early photographs in the Royal Commission’s archive. The gentlemen’s hats may date the photograph to c.1900.

This historic image (which seems to show the same gentlemen as above – note the hat!) is taken from an original stereoscopic slide popular in the late Victorian era.

An old-looking window but with cast-iron Gothic detail for window glass long since gone. The incoming celebrity guests may find it draughty!

Aerial photograph taken as part of the Royal Commission’s programme of archaeological aerial reconnaissance in 2015 showing the roofless castle.

I‘m a Celebrity Get Me Out of Here!

Who will be this year’s ‘King’ or ‘Queen’ of this historic castle? Good luck to all this year’s contestants!

I’m a Celebrity, filmed at Gwrych Castle, returns on ITV this Sunday (November 15) from 9pm.

Find further images of Gwrych Castle and other sites across Wales on our online database Coflein.