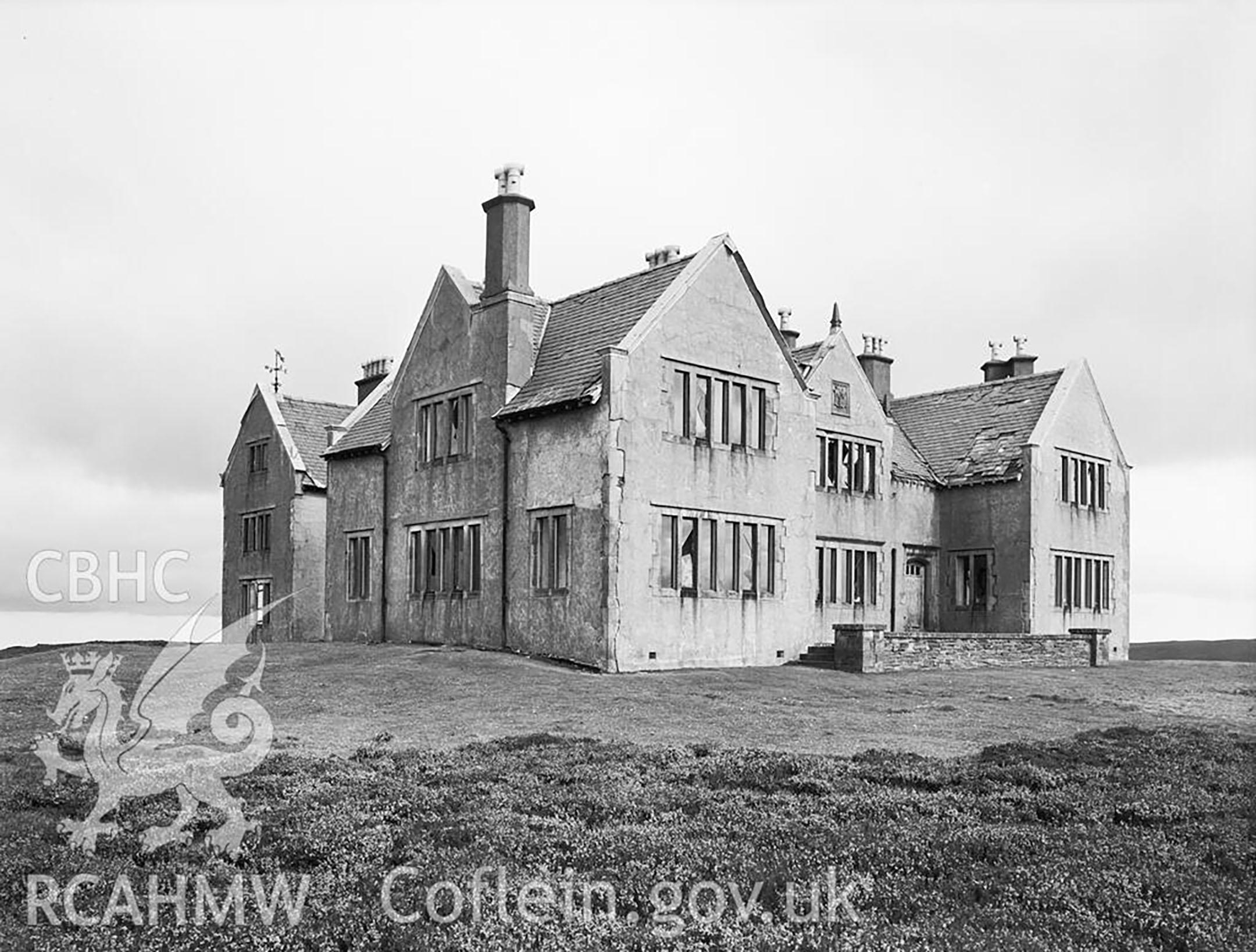 Bryn Trillyn (the hill of the three lakes) is located in the heart of the Hiraethog mountains in Denbighshire. It’s also the name of an old tavern built around 1829 on the turnpike road between Pentrefoelas and Bylchau near Denbigh made to link with Telford’s A5 running from London to Holyhead.

The tavern is best known as being the highest in Wales at around 495m above sea level and was often snowed-in during the winter. Its other name, The Sportsman’s Arms, is a clue to the huge popularity of the area in Victorian times and at the beginning of the twentieth century for hunting and grouse shooting.

This was what attracted a man called Hudson Ewbanke Kearley (1856-1934), later Viscount Devonport, to the area. Kearley was a businessman who had made his money by setting up the International Tea Company Stores, a chain with over 200 shops. He was also a successful politician and was appointed minister with responsibility for food supplies in Lloyd George’s Cabinet in 1916.

In the 1890s, Kearley built a substantial wooden hunting lodge near the tavern and called it Gwylfa Hiraethog (the Hiraethog Watch Tower) which was called locally ‘Plas Pren’ (the Wooden Hall). The original building was imported from Norway and re-erected on a very bleak and exposed site with dramatic views across to Snowdonia. Lloyd George addressed a large crowd from the balcony in 1908 when it was re-built as a Jacobean style stone mansion with 11 bedrooms which was extended in 1913. It must have been a startling sight for travellers on the lonely mountainous road.

The family held shooting parties for their wealthy friends and the remains of the butts can still be traced in the heather. However, not surprisingly, Lord Devonport found it difficult to attract servants to work there and it also proved difficult to carry goods to the site. It was said locally, for example, that it took sixteen horses to haul coal to Gwylfa Hiraethog. As travelling to grouse moors became easier by car, Lord Devonport decided to sell the estate in 1925. The last person to live at the house was Huw Williams, gamekeeper and later bailiff for the Hafod Elwy estate.

The house was empty from the 1950s and unfortunately very little is now left of its former grandeur. As the poet Ieuan Brydydd Hir wrote in his poem to Ifor Hael’s hall,

‘Thorns and the blight of thistles own it,
Briers where there was once greatness.’

We hope you enjoyed our latest blogpost. If you have any comments or stories you’d like to share, we would love to hear from you.

Thanks for this. It was such a dramatic landmark on the horizon as you crossed the moors. It must have been a happy, busy place for many years, but we only knew it as a brooding ruin. We watched it deteriorate amazingly rapidly over a decade or so.

Thank you for sharing this memory of the ‘brooding ruin’. It will strike a cord with many visitors to Denbigh Moors. It is very fortunate we have photos of the lodge before it became ruined. https://coflein.gov.uk/en/site/23045/images