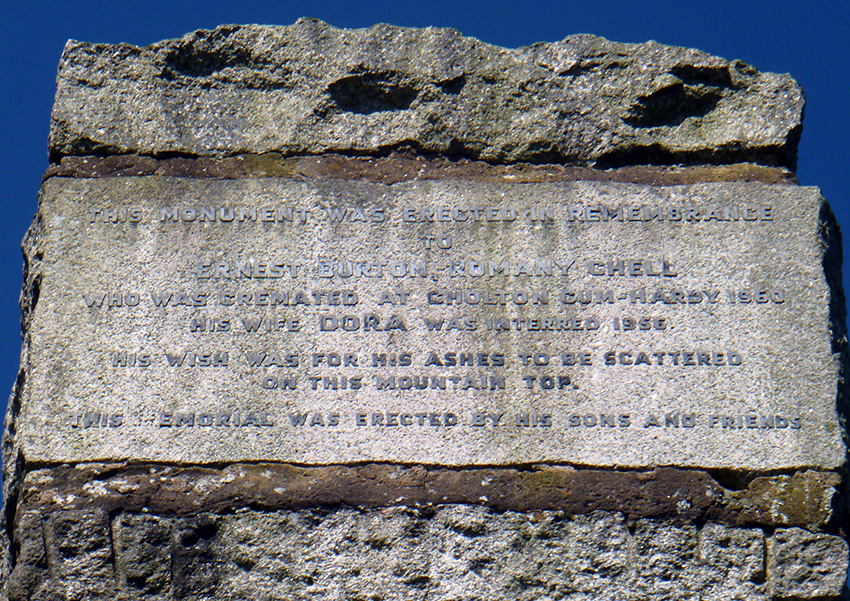 Romany Monument to Ernest Burton looking north, with Criggion Quarry and Rodney’s Pillar visible in the background, and the Severn Valley below.

A stone monument stands near the summit of Moel y Golfa commemorating the Romani Chell (Chief), Ernest Burton. Constructed of over twenty-five tonnes of granite, it commands an impressive situation, overlooking the surrounding countryside.

As a Romani leader Ernest was not sedentary, travelling throughout Britain and Ireland, but he was born and lived often in Wales, breeding horses and trading horses and cattle. His connection with the Breidden hills was obviously personal, as he wished for his ashes to be spread there after his death. When Ernest died in 1960 his son Uriah honoured this wish, flying in an aeroplane to carry it out. However, his family wished to do more, returning three years later to erect the stone memorial. 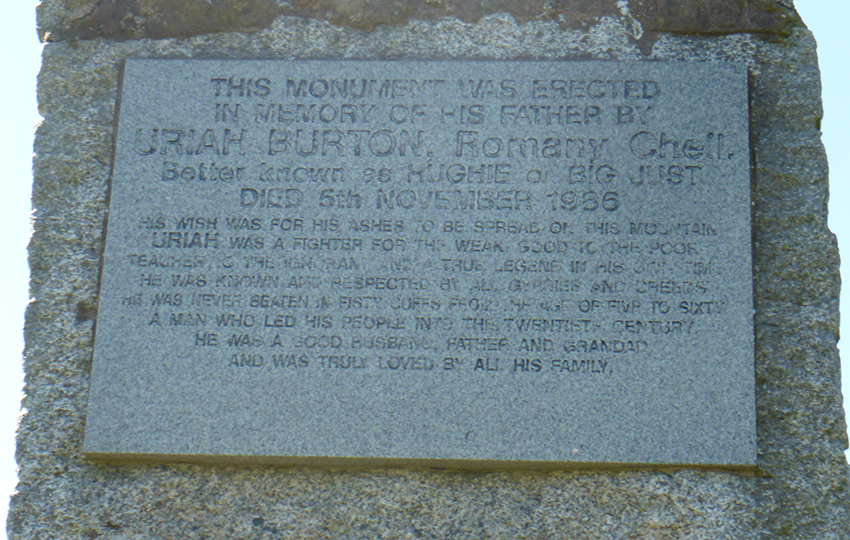 Ernest’s sons Uriah and Hosiah took the lead. Uriah (aka Hughie or ‘Big Just’) was a formidable fighter. From c.1960, he was ‘King of the Gypsies’, a title signifying the best bare knuckle boxer. His fighting prowess has been inherited by his grandsons, British light heavyweight champion Hosea Burton and former world heavyweight champion Tyson Fury. Their grandfather left an impressive legacy: a plaque on the monument notes that he was undefeated from the age of five. ‘Big Just’ was also known for his fairness. In 1964 he founded a travellers’ site in Partington, Manchester, administering justice to the inhabitants.

Land for the monument was obtained through donation, but contractors stated that the proposed structure was unfeasible. Undeterred, the Burtons decided to do it themselves, with others’ assistance, and the granite blocks were shipped from Devonshire. However, when construction began many who had promised to help failed to come. The brothers reportedly impressed the truants, taking a bus throughout Britain, handcuffing the men, and driving them to Wales. In an article in The People (Nov. 1963) Uriah clarified that this was, more or less, accurate, although his use of ‘kidnapping’ was possibly facetious. As he said, ‘they had made a promise and should keep it’.

Once in Wales, the workers were housed and provided with food and drink. The Burtons even offered remuneration, an offer most refused. The work was difficult and dangerous. An eighteen-wheel lorry was lent for the task but the rough path and steep incline almost caused the lorry to overturn. Eventually it was saved but afterwards no one would drive it apart from Hosiah.

Ultimately the monument was completed: a dozen feet of granite with an inscription near its top commemorating Ernest and his wife Dora. This was not the end of construction, however, as after Uriah’s death in 1986 a plaque was added memorialising his life, fighting prowess, and character: ‘a true legend in his own time … known and respected by all Gypsies and creeds’. The stones on Moel y Golfa therefore serve as a memorial to two generations of Romani leaders, father and son: an impressive addition to the monuments of Wales.

My Grandparents lived at Ty Bryn on the Moel Y Golfa. As a child in the early 60s we would very often walk up to the monument. Our gran used to tell us about all the traveller people who came to build it. This article was interesting and brought back happy memories of the holidays at Ty Bryn

It’s a small world. I live in Ceredigion, but was brought up not far from Moel y Golfa, and yesterday I copied your link to my FB page. This evening an old Lampeter friend rang me and said he knew Big Just from his Partington days, and from what he said he clearly knew and respected the family.