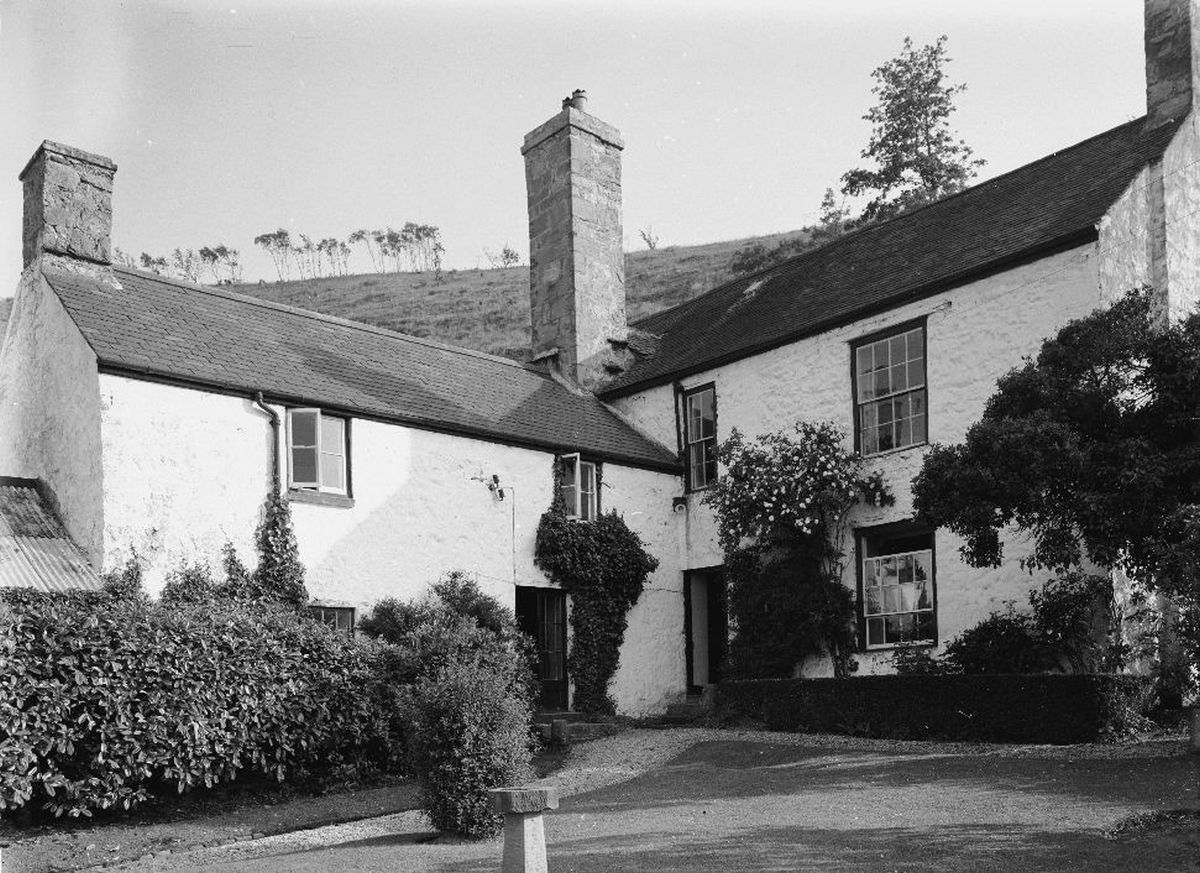 My favourite images relate to a site which holds great personal interest for me- it was the house where I lived as a teenager growing up in north Wales in the 1970s and 80s: Hendre Uchaf, Abergele.

To my joy, I immediately discovered a series of photographs taken by the superb and prolific architectural photographer, G B Mason, who worked for the National Buildings Record (which later provided the core of our own National Monuments Record). From the Second World War through to the 1960s, he took some 11,000 photos of sites throughout Britain often capturing their essence before demolition or renovation. Both these images were taken in 1953 long before I lived there (!) and before the house had been renovated. but I remember the garden remained unchanged with the rambling roses reaching to the bedroom window and the large oak front door with the datestone 1591 clearly set above. I look at that doorway now, with Mr Black, the former owner’s sheepdog sleeping lazily in the afternoon sun and muse how many times I must have run in and out at the time, with little care of the future or its historic interest- it was just a home to me and my brothers and sisters who are now spread across the world!

Researching the history of Hendre Uchaf, I found that Peter Smith had made a plan of the house and it was included in his encyclopaedic Houses of the Welsh Countryside (fig. 95c). This showed that the houses belonged to a class of early storeyed houses with a fireplace on the long wall. It was included on four distribution maps (Maps 28, 37, 28 and 48a) which gave a potted architectural history of the house. I now know that there are hundreds, if not thousands, of historic houses in Wales but for me Hendre Uchaf will always be special.

Hello.
What a wonderful photograph!
I believe this is the lovely house that we had the good fortune to stay in for a week back in the late 1990’s.
Wonderful memories of the house with its marvellous wood panneling, open fire,visiting deer tapping at the kitchen window and wonderful surroundings that were just begging to be explored!
My family speak about that holiday often, many times trying to find it in the hope of staying there again, but sadly it was never again available to lease.

My 2nd great grandfather Peter Roberts, was employed as a gamekeeper by H R Hughes of the Kimnel Estate, St George, Denbighshire. In December 1859, he encountered a number of poachers at Hendre Uchaf, then the property of H R Hughes. Peter challenged the said poachers, and as a result, they opened fire causing Peter serious injury. The case against the poachers was heard at the Magistrate Court, Abergele. After much deliberation, the prisoners were found guilty and sentenced to 12 months imprisonment with hard labour. In spite of his injuries, Peter lived to the ripe old age of 85.… Read more »

Thank you for sharing this wonderful story with us Selwyn. As the author of the blog I really appreciate learning more about the house where I lived as a teenager, I didn’t know that Hendre Uchaf, once belonged to the Kimnel Estate, although it makes perfect sense. Your story about the poachers is really very informative and interesting. Thank you.