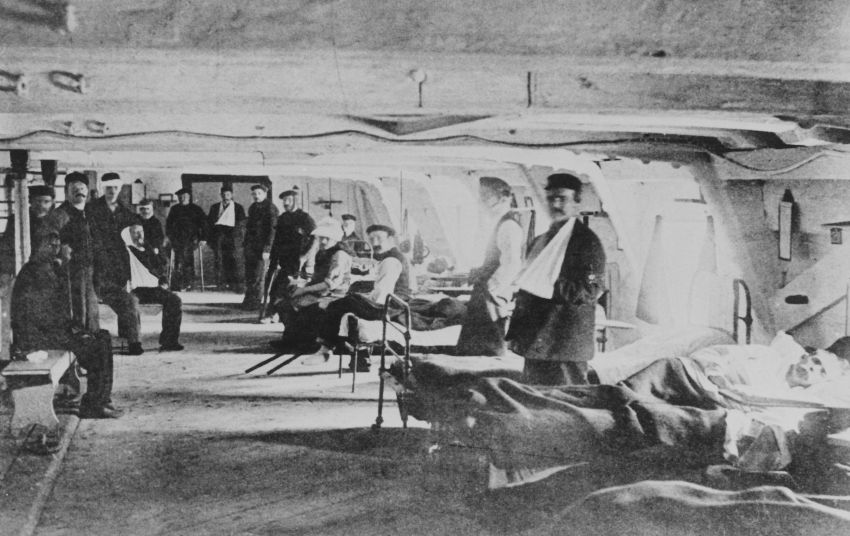 Many Cardiffians will remember the Royal Hamadyrad Hospital, once a seamen’s hospital and later a psychiatric hospital in the docklands area of Cardiff, which closed in 2002, but fewer will know its origins as a hospital ship, HMS Hamadryad. During the 1860s, HMS Hamadryad was one of three former Admiralty timber-built warships which became permanently moored in Cardiff docks. HMS Thisby served as a ‘gospel ship’ for church mission use and HMS Havannah served as a ‘Ragged School’ to train boys for a seafaring life.

The hospital opened on 1 November 1866 to provide care for sick sailors from the ports of Cardiff, Barry and Newport. The Hamadryad Hospital served as Cardiff’s only hospital for treating infectious diseases until the 1890s when an isolation hospital was opened on the island of Flat Holm. The ship was fitted out for her role as a hospital ship with 60 beds at a cost of £2791 0s 5d but remained the property of the Royal Navy. Initially berthed in the Bute East Dock, in 1867 the Hamadryad was moored on a patch of tidal waste near the sea-lock of the Glamorganshire Canal on waste land given by the Marquis of Bute, close to a housing area which later became Tiger Bay.  The founder of the Hamadryad Hospital was Dr Henry James Payne, Cardiff’s first Medical Officer of Health between 1855 and 1877. Dr Payne worked heroically to reduce cholera, smallpox and typhus, and during its four decades in Cardiff docks the ship provided treatment for more than 173,000 patients. The death rate of 4½ per cent. was half that seen in some London hospitals. Patients of all nationalities were admitted but women were not accepted as patients, as it was a seamen’s hospital, although of course they were indispensable as nurses!

In June 1905, the work of the hospital ship moved ashore to a new purpose-built hospital nearby. It was designed by the Marquis of Bute’s estate architect, E W M Corbett, and renamed the Royal Hamadryad Hospital for Seamen.  The red-brick building with terracotta detail has been described by John Newman (a former Royal Commissioner) as ‘An ebullient performance in [Corbett’s] favourite Queen-Anne-cum-Jacobean style’. The new hospital had 54 beds and remained a seamen’s hospital until 1948 – only one of two in Britain offering free treatment exclusively to seafarers. Following the creation of the NHS, the Royal Hamadryad became a general hospital and later a psychiatric hospital until closure in 2002.

Throughout this period the figurehead of HMS Hamadryad looked down benignly on staff and patients. This figurehead along with the ship’s bell are now in the collections of Amgueddfa Cymru – National Museum of Wales.

The history of HMS Hamadryad is a reminder of the heroic fight against infectious diseases. Further details of the Hamadryad’s story is told by Dr David Jenkins, with many other stories by over 50 different experts on Welsh maritime history, in the Royal Commission’s latest joint publication, Wales and the Sea: 10,000 Years of Welsh Maritime History,  currently available from the Welsh Book Council: http://www.gwales.com

I am Secretary of Cardiff Medical Society and we are celebrating our 150th Anniversary. The doctors who brought the hospital ship to Cardiff were the same people who founded our Society. We are undertaking work to learn more about the history of medicine in Cardiff and HMS Hamadryad is a particularly interesting aspect. Anyone who has an interest or who think they might be able to make a contribution, please get in contact.

My daughter a psychiatric nurse is still employed in 2022 at the on shore Hamadryad hospital as it didn’t close. It has its own ghost lady and the rats from Taff and The Bay are very large

My mother, Helene Morgan, worked there as a SRN nurse during early 1950s

You can see the figurehead and hear a bit more about the story of the Hamadryad at the Museum of Cardiff, in the Old Library building in the city centre.