The wreck of the First World War hospital ship HMHS Anglia has recently been given a designation under the Protection of Military Remains Act 1986. This will now provide legal protection to the wreck. Twelve other wartime vessels have been added to the lists of protected military vessels this year to bring the total number of ships and submarines protected as war graves to 79. The designation, which came into force on 3 March, will mean divers are still free to explore the site but they must not touch or remove anything they find.

The steam ship ‘Anglia’ had been built for the London and North-Western Railway Company and was in service as a passenger steamer between Holyhead and Dublin from 1900 to 1914. When the First World War broke out, she was commandeered for war service by the Admiralty, refitted as an auxiliary hospital ship and renamed the HMHS (His Majesty’s Hospital Ship) Anglia.

On 17 November 1915, HMHS Anglia (main photo above) struck a German mine near Dover while carrying 390 wounded soldiers, medical staff and a crew of 56, mostly from Holyhead.  164 people went down with the ship, including 23 crewmen from Holyhead. Many of the dead were ‘cot cases’ with incapacitating war injuries and also the nurses taking care of them.

The loss of the HMHS Anglia occurred just 8 days after her sister ship, the HMS Tara was torpedoed by a German U-boat. People in Holyhead were still awaiting news of missing Holyhead crew from the Tara when news of the Anglia’s sinking arrived. When the casualties from both ships were confirmed, the town had lost a total of 40 men. 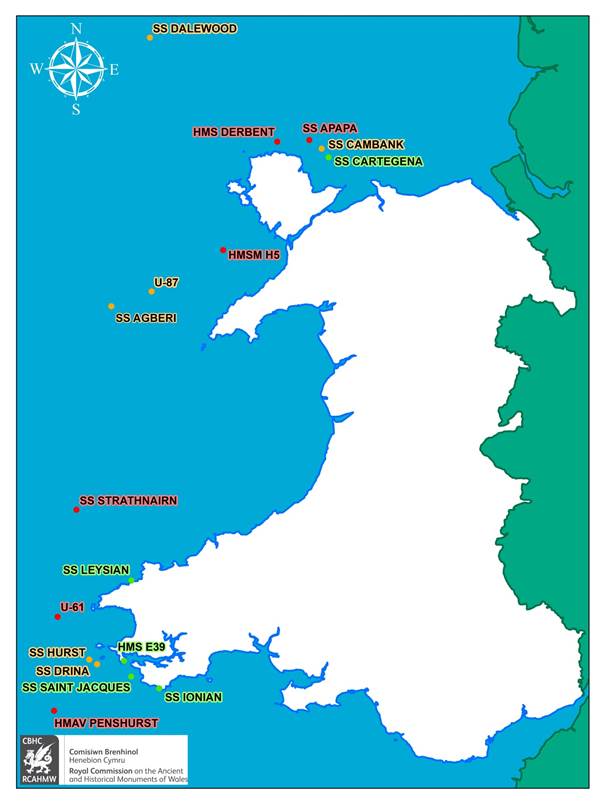 Map showing First World War wrecks to be surveyed as part of the project, Commemorating the Forgotten U-boat War around the Welsh Coast: 1914-18

As part of the commemoration project, ‘The Forgotten U-boat War around the Welsh Coast: 1914-18’, we hope to provide unprecedented access – for the first time in 100 years – to the remains of merchant ships and naval vessels which were sunk by German U-boats and still lie on the seabed in Welsh waters. It is proposed that marine geophysical survey will be undertaken to include the capture of underwater video footage. This data will be combined into 3D interactive models and animations to allow this hidden heritage to be viewed by the public for the first time. The map above shows the 16 First World War wrecks which have been selected to be surveyed as part of the project. We can now confirm that as a result,  259 lives will be directly commemorated.

These vessels have been underwater and deteriorating for approximately 100 years. The evidence from Scottish and English waters suggests that many are now on the cusp of large scale structural collapse. This project may represent a final opportunity to record these lost ships in their largely ‘intact’ state. In the case of the HMHS Anglia, a survey carried out by English Heritage in October 2014 pinpointed the vessel’s exact location and condition, information that was critical for her to be considered for designation under the Act. 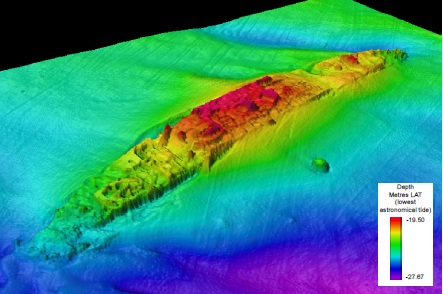 The project’s surveys of First World War wrecks in Welsh waters will enable us to provide datasets and a report of  recommendations for future wreck management and monitoring to Welsh Government, and provide suggestions to the Ministry of Defence for adding a selection of these vessels to the Schedule of Protection of Military Remains.

The ship’s anchor was retrieved from the seabed and is displayed on Newry Beach, Holyhead. A memorial service was held there in 2015. The Holyhead Maritime Museum has a record of this service here:  https://www.flickr.com/photos/holyheadmaritimemuseum/16439092917/in/album-72157631255006052/

We will be posting more blogs as part of the centenary project: Commemorating the Forgotten U-boar War around the Welsh Coast 1914­—18. Read previous posts here:

Call for contributions: if you have any information, documents or photos relating to any aspect of this project, or you would like to get involved, please contact us.