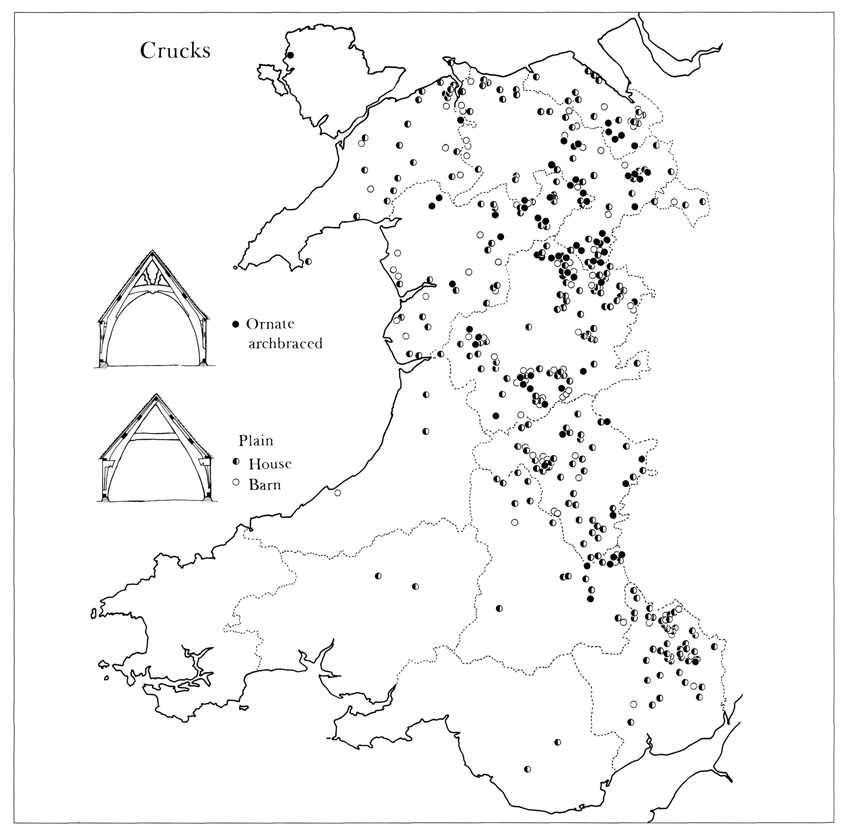 Houses of the Welsh Countryside

For much of the nineteenth and early twentieth centuries the study of farmhouses and cottages was pursued by antiquarians more or less independently of professional archaeologists and historians. In 1975 two path-breaking books on vernacular architecture were published: English Vernacular Architecture by Eric Mercer and Houses of the Welsh Countryside by Peter Smith, secretary of the Royal Commission. Both were departures from the Commission’s style of inventories, and both were exhilarating combinations of empirical research and mature reflection. The books were very different in their attempts to make sense of an enormous amount of information. Mercer adopted an evolutionary approach, broadly arguing that domestic architecture passed through various stages of development irrespective of location; Smith’s approach was diffusionist, tracing the spread of architectural innovation across the face of Wales.

The arrangement of HWC  (as Smith’s book is affectionately known) was novel. The sub-title, ‘a study in historical  geography’, drew attention to the book’s heart- a series of fifty maps that plotted the geographical distribution of distinctive architectural features of Welsh houses. The consolidated list of sites alone, arranged by county like the inventories, extended to an astonishing thirty-six double­ columned pages: it is an invaluable reference point. Smith’s map-based approach was influenced by The Personality of Britain (1932) by Sir Cyril Fox, one of the earlier commissioners. Fox claimed that the whole of Wales belonged archaeologically to the ‘highland zone’ of Britain, yet Smith showed that the ‘architectural personality’ of Wales was complex, with differing regional distributions of features.

Peter Smith concluded from maps of date inscriptions that architectural innovation generally spread from east to west and he employed an amusing railway metaphor to make the point. Numerous maps plotted the medieval Welsh tradition of high­ quality carpentry: the distribution of full roof-crucks showed at a glance the extraordinary numbers of surviving medieval houses in Wales and their uneven distribution. He also showed that medieval houses had a uniform plan and that they were succeeded by a diversity of regional house-types. The timing of the transition from open hall to storeyed house, and the reasons for the diversity of planning of post-medieval houses, are matters of intense interest today. Smith illustrated the different house-types with numerous plans and evocative cutaway drawnigs – models for future work in this field.

▶️ The Oldest House In Wales

HWC  was – and is – a voyage of discovery. It was possible to write it because of the rapid accumulation of survey information, catalogued in the reinvigorated National Monuments Record. It now seems astonishing that key sites like Ty-mawr, Castle Caereinion, and numerous other significant buildings were identified and put in context for the first time by Peter Smith and the Commission. These were by and large houses without a documented history: Smith showed that buildings were historical documents in their own right and that their study is integral to the study of history more generally. HWC enriched and broadened appreciation of the historic and vernacular architecture of Wales, leading to the conservation of many houses that would otherwise have disappeared.

HWC  took its apt epigraph from O. M. Edwards’s Cartrefi Cymru:  ‘Tybed  fy mod  wedi  codi  awydd ar rywun, yn y dalennau  sydd yn y llyfr hwn, i fyned ar bererindod i rai o gartrefi Cymru....'(I wonder if I have, through the pages of this book, inspired anyone to venture on a pilgrimage to some of the houses of Wales).

I can still clearly remember the excitement of my dad, Peter Smith, as he removed sheets of corrugated iron to expose the bones of Ty Mawr. I was very young and perhaps more interested in the tin of sweets in Cecil Owen’s car – one of my dad’s friends who so kindly drove Peter along the hills and lanes of Wales. Upon our return home the excitement still undiminished, as he evoked Howard Carter’s words -” I have seen wonderful things.”

Very pleased to find this on my phone,

I grew up in a “plain” old farmhouse (Tyn-y-gwern Farm) in Llanedeyrn – looked exactly like the ones in the photograph. I believe it was a “listed” house – ultimately it fell vacant, was vandalized and I understand it is now a Toby’s Carvery.