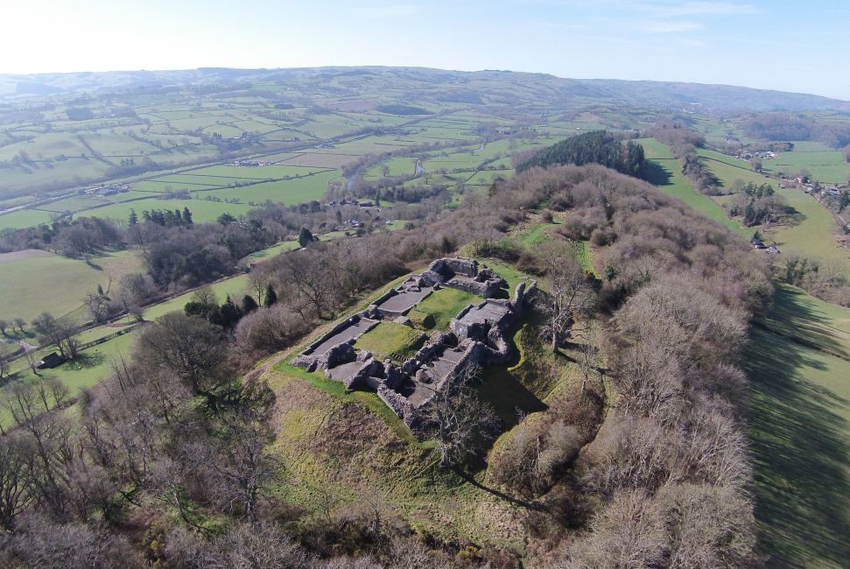 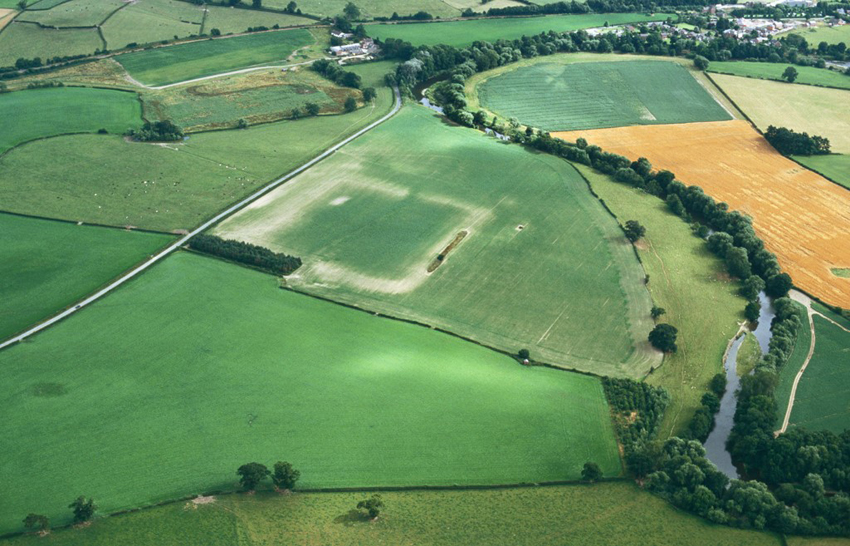 The ford at Rhydwhyman, where the Treaty of Montgomery was signed on 29 September 1267, is located at the bend in the river at the top of the photograph. The massive banks of Forden Gaer Roman Fort show as parchmarks in the centre.

On 29 September 1267, the ford at Rhydwhiman was the site of the signing of the historic Treaty of Montgomery. This treaty, where Henry III recognised the right of Llewelyn, Prince of Wales, to rule his own lands, was signed at a ceremony attended by the two rulers and confirmed arrangements brokered by the papal legate Cardinal Ottobuono. Although the site now appears to be a lazy tree- canopied bend in the river, its role in shaping human activity in the local area has been profound. The Iron Age hillfort at Fridd Faldwyn, the Roman Fort at Forden Gaer, the Norman castle at Hen Domen, and the later medieval castles at Montgomery and Dolforwyn, all owe their strategic importance to their proximity to the ford.

The ford’s significance is based on two topographical characteristics. Firstly, it is the lowest point on the river that is easily forded. Secondly, it marks the point where the Severn is transformed from a fast-flowing river in its upper course, with a relatively steep and narrow valley, to a slower river in its middle course within a wider floodplain more suited to agriculture. The character of its geography led to boundaries between communities that were reflected in the building of places of political and military power. Our gallery shows the group of major monuments clustered around the ford.

We’ve put together a gallery on our Coflein website to mark the seven hundred and fiftieth anniversary of the Treaty of Montgomery.

Dolforwyn Castle was founded by Llywelyn ap Gruffudd six years after the signing of the treaty, after the peace it created had begun to crumble.

Happy New Year everyone – keep safe. This is a fantastic photograph of not only Rhywhydman but also of the Roman Fort Gaer – I drove past it on Sunday and without the crops you could really get a sense of how large the area must have been. I read that the garrison of the Roman Fort could well have been manned by local troops (ie those locals who had pledged allegiance to the Roman empire) who were protecting the supply route into Wales from Wroxeter to Caerswys and presumably the coastal ports at Aber???? A winter posting next to… Read more »