CBHC / RCAHMW > News > In the steps of Owain Glyndŵr 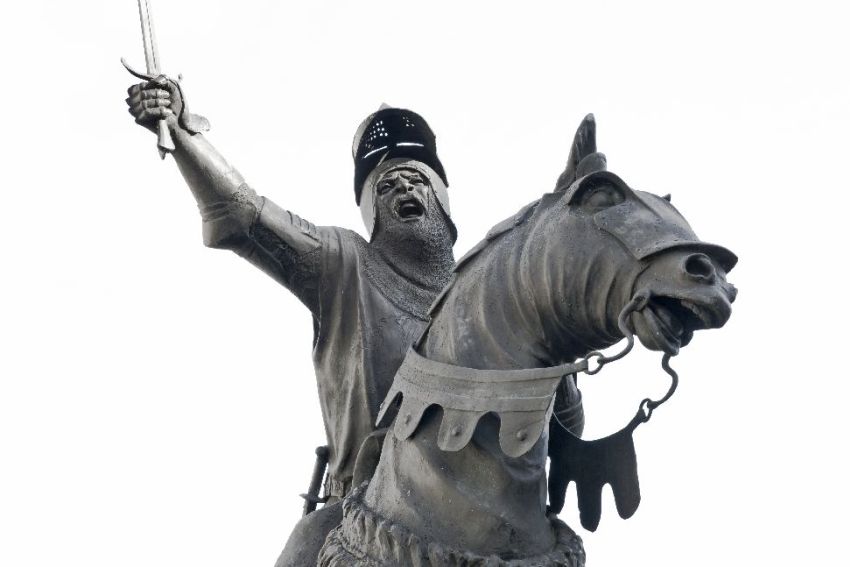 In the steps of Owain Glyndŵr

One of Wales’ best known national heroes, Owain Glyndŵr lived between c.1359- c.1415. He was descended from the royal houses of Powys and Deheubarth with lands in north-east Wales and the Teifi valley and was educated in London as a lawyer.

In 1400, he led a revolt against the king, Henry IV, which spread throughout Wales leading him to be crowned Prince of Wales in 1404. Glyndŵr’s vision for an independent Wales included a Welsh parliament and a university. Ultimately he failed and the uprising was defeated by 1412, with Glyndŵr disappearing never to be seen again. He was never betrayed by his followers even though they would have been well rewarded by the English crown. Shakespeare portrayed Glyndŵr (Glendower) in his play, Henry IV Part 1, as a romantic figure, and his story still represents the last native-born leader who united Wales. There are several places associated with Owain Glyndŵr in Wales and you can walk Glyndŵr’s Way, a 135-mile national trail through mid-Wales. The Commission has surveyed many sites associated with Glyndŵr, and here’s a selection of five sites on Coflein (www.coflein.gov.uk) to start your trail in the steps of Owain Glyndŵr.

The poet Iolo Goch composed a poem about Sycharth, one of Owain’s main residences and probably his childhood home, where he praised the welcome and hospitality on offer.  The house was located on the site of a Norman motte in Llansilin, Denbighshire, by the river Cynllaith.  Owain’s ‘llys’ or palace would have been built of timber, with a tiled roof and a surrounding moat. According to the poem, there were nine halls, four bedrooms, a chapel lime washed like a church with fish ponds, a vineyard and orchard, and peacocks, cranes, deer and rabbits providing food and drink of the best quality. The house was razed to the ground by Prince Hal, the future Henry V, in 1403 and only the motte remains although there are the traces of ridge-and-furrow ploughing in fields nearby. However Iolo’s poem gives a rare glimpse of the privileged and cultured life led by Owain and his family before the rebellion. Sycharth was excavated by Douglas Hague, a former member of staff of the Royal Commission. His report was published in Archaeologia Cambrensis volume 115 (1966).

This motte with a separate moat is situated on an imposing site overlooking the river Dee between the A5 and the Llangollen Railway at Glyndyfrdwy, Denbighshire. Although the Victorians called the motte ‘Glyndŵr’s Mount’, it is probably the site of an earlier castle guarding the Dee valley. It is likely that Owain Glyndŵr’s house stood at the moated site about 180m east of the motte. It was here, a Welsh source states, that Owain declared himself Prince of Wales on 16 September 1400 after a bitter quarrel with Reginald de Grey, Lord of Ruthin, over land, starting his national rebellion against the Crown. As happened at Sycharth, Prince Hal, afterwards King Henry V, burnt the house in 1403.

In June 1401, Owain Glyndŵr’s army of around 500 soldiers faced a much larger army of Welsh and Flemish soldiers from Pembrokeshire fighting for the Crown. Despite inferior numbers, Owain won a famous victory. The exact site of the battle is unknown but tradition places it at Hyddgen, a remote spot to the west of Pumlumon in Ceredigion. This is still very boggy mountainous terrain which probably suited Owain’s strategy of drawing the opposing soldiers into unfamiliar territory before attacking with his archers. His camp is likely to have been at Siambr Trawsfynydd nearby which tradition associates with Glyndŵr. Two quartz stones, ‘Cerrig Cafamod’ are said to mark the site of the battle but there is no direct evidence for this. The dead are said to have been buried at Esgair y Ffordd. This victory demonstrated that Owain was now a force to be reckoned with, attracting growing support in Wales. For further information, see the Royal Commission’s Inventory of Historic Battlefields in Wales.

After his success at the battle of Hyddgen, on 22 June 1402 Owain Glyndŵr and his supporters met an army led by Sir Edmund Mortimer at Pilleth, near Presteigne, in the historic county of Radnor. It is known as the Battle of Pilleth or Bryn Glas. Owain was once again outnumbered and Mortimer tried to get him to engage in a full fight. Although there are few remaining accounts, it appears that during the battle, Owain’s archers were able to get the better of Mortimer’s soldiers and some Welsh archers in Mortimer’s army defected to Glyndŵr. Owain hid his soldiers at the side of the hill and successfully attacked the rear of the army. This heavy defeat for Mortimer boosted Welsh support for Glyndŵr. Mortimer himself was captured and Owain asked King Henry for a ransom which he refused to pay. This so incensed Edmund Mortimer that he changed sides and married Owain’s daughter Catrin thus creating a family alliance. The victory strengthened Owain Glyndŵr’s rebellion, at least for a time. Bryn Glas is said to contain a mass grave and nearby is the Norman church of St Mary which stood at the time of the battle.

By 1404, Owain Glyndŵr had gained support from all over Wales and he called the first Welsh parliament in Machynlleth, Powys. Many Welsh people had grievances against English landowners  who took land previously owned by Welsh families. The meeting not only involved representatives from Welsh communities but also those from Scotland, France and Castille in Spain. He was crowned Prince of Wales in front of his supporters and the Bishops of Bangor and St Asaph. Machynlleth was already an important market town in 1404 and is located in the middle of Wales. There is a local tradition that the coronation took place in a medieval building which still stands on Heol Maengwyn. Although the roof timbers of the old Parliament House  have been succesfully dated by the Royal Commission to c.1470, the site is likely to have been older and therefore this could have been the location of the parliament of 1404. The hall house was restored and an institute built for the town in 1912 by Lord Davies, grandson of David Davies, the wealthy industrialist from Llandinam. The complex was restored as a lasting memoral to Owain Glyndŵr – in the large mural of the battle of Hyddgen by Murray Urquhart, Glyndŵr has the face of Lord Davies! Today, the centre hosts a fascinating exhibition about Owain Glyndŵr, meeting rooms and a cafe.