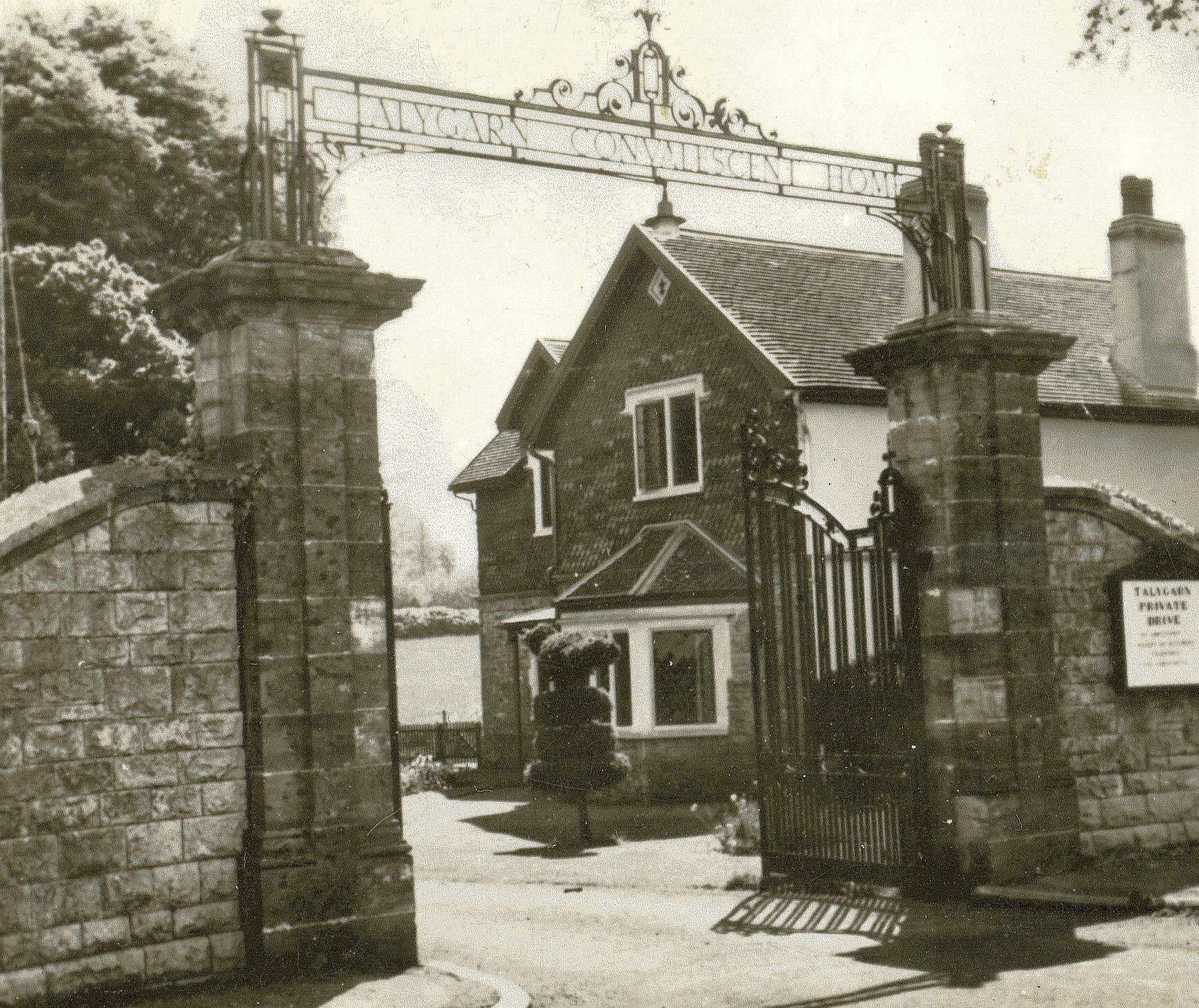 On International Workers’ Memorial Day #IWMD21 & World Day for Health and Safety at Work, find out about Talygarn – the convalescent and rehabilitation centre for injured miners in South Wales.

Working in the most dangerous of industries, miners were regularly injured or killed through accidents, such as roof falls or explosions. Chronic diseases such as ‘miners’ lung’ and rheumatism as well as broken spines, amputated limbs, shock and mental strain brought thousands of miners from the collieries of South Wales to the country house and grounds of Talygarn for convalescence in the 1920s & 30s; and for more structured rehabilitation from 1943.

Talygarn, a large country manor house near Pontyclun, was built mainly in the period 1879-82, by the vastly wealthy surgeon, engineer and ironmaster, George Thomas Clark.

The interior of the house was richly decorated with Italianate wood panelling and painted panels. The 180-acre grounds included a four-storey Italianate water tower, a conservatory, a large sunken formal garden, a formal terraced garden, and an informal arboretum area of grass planted with specimen mixed trees. Clark was a horticulturalist, and at Talygarn he propagated tree seeds and bulbs from South Africa and Japan and even grew bananas. Both house and garden are listed grade II*.

Following the financial collapse after the First World War, Clark’s grandson, Wyndham Damar Clark, sold the house and grounds to the South Wales Miners’ Welfare Committee in 1922, who then opened it as a miners’ convalescent home a year later. Between its opening and 1939 more than 41,000 patients passed through its doors. There were normally around 100 patients in residence at any one time, their ages ranging between sixteen and seventy years old.

As a convalescent home, the focus of Talygarn was as a place of rest and recuperation for the injured miners, rather than a medical centre.

Rest, good diet, light recreation and fresh air were the main methods of helping the injured and sick miners to recuperate, although many of the patients did not return to heavy work after their two-week stay, having been left permanently disabled.

Light recreation included activities such as fishing in the trout pond, bowls, trips to football matches, billiards, and skittles. There was a library, the winter gardens served as a lounge, and patients had the full freedom of the extensive grounds.

Concerts, dramas and eisteddfodau were a part of regular entertainments for the patients. Each patient had a free trip to the cinema once a week as well as a free pint of beer every night. Those who were able to return home each weekend were given free rail passes.

Rehabilitation for the war effort & the NHS

In 1942, in order to keep mines at full capacity during a labour shortage caused by the Second World War, the government White Paper on Coal recommended 50% grants for rehabilitation centres, and in 1943 the Miners’ Welfare Commission was requested by the Ministry of Fuel and Power to organise a rehabilitation service for injured mineworkers to get them back to work.

Treatment consisted of a regime of exercise in the gymnasium, physiotherapy, team games, handicrafts, and outdoor work. The centre was equipped with one large gymnasium and two smaller ones, a radiotherapy and massage department, a plaster room, and an x-ray room.

To rehabilitate the men to return to the collieries, a carpentry shop was provided where patients sawed logs and did more specialised woodworking. Miniature stairs and static bicycles were available to exercise unused muscles and there was even a replica ‘coalface’ constructed to assess the miner’s ability to return to work underground.

It has been argued that this medical model of treating injured miners, ignored the factors which caused their disability – the inherently dangerous conditions of working in coal mines. The principal purpose of rehabilitation was economic – to return them to being useful workers, back to an environment where they could be injured again.

Talygarn was taken over by the National Health Service in 1955 when a covenant was included in the conveyance of the property that it should “be used and maintained as a Rehabilitation Centre primarily for injured workers in or about Coal Mines and to use the same for no other purpose . . . until not less adequate alternative facilities are available to such workers”.

With widespread colliery closures in the 1980s, the number of patients treated at Talygarn fell dramatically. In 1996, Talygarn treated just one miner and seven ex-miners. In 1999, the services from the Talygarn were transferred to the Royal Glamorgan Hospital.

In the grounds there is a garden with an octagonal roofed pool and a statue of a heron, created in 1981 as part of a ‘Garden for the Disabled’ project.

Photographs showing patients at Talygarn in the collections of Amgueddfa Cymru—National Museum Wales.

‘They Live Again!’ film made in 1944 showing a miner with an injured spine being sent to Talygarn to make a full recovery.

Disability in industrial Britain – A cultural and literary history of impairment in the coal industry, 1880–1948, by Kirsti Bohata, Alexandra Jones, Mike Mantin, and Steven Thompson, 2020.

Talygarn It is a lovely place at Talygarn A real home from home With plenty of good food And everything to tone The Major is so kind And all the staff as well We all have to get ready For the ringing of the bell We file in one by one, And stand behind our chairs And when we are all ready, We commence to sing our prayers The “leader” one of the staff Who is sweet and low Shouts out when we have finished “Now lads come down below” Each morn at seven we go below And have a… Read more »