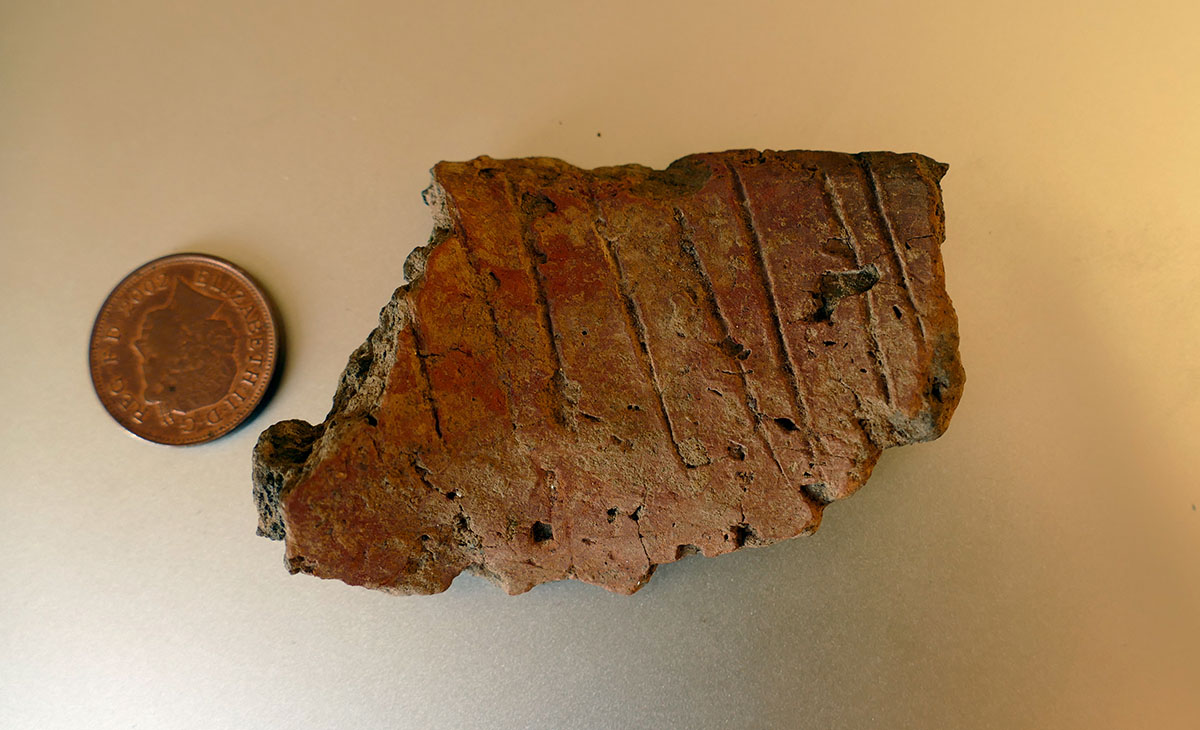 Chance finds of prehistoric stone tools and fragments of pottery, picked up from a rabbit hole by the wardens of Skokholm Island, have surprised experts and hint at new chapters in the prehistory of this famous island.

Nicknamed ‘Dream Island’, Skokholm lies two miles off the south Pembrokeshire coast and is owned by the Wildlife Trust of South and West Wales. It is famed for its tens of thousands of nesting seabirds in the spring and summer months.

Nearby Skomer Island is better known for its well-preserved prehistoric archaeology. That all changed in March 2021 when wardens Richard Brown and Giselle Eagle, currently alone on the locked-down island, picked up a smooth rectangular stone from a rabbit hole near the island’s cottage, in the shelter of a rock outcrop.

Photos were emailed to archaeologist Dr Toby Driver of the Royal Commission, Wales, part of the team who has worked on nearby Skomer Island, who contacted prehistoric stone tool expert Dr Andrew David.

Andrew immediately recognised the significance of the find:

‘The photos were clearly of a late Mesolithic (Middle Stone Age) ‘bevelled pebble’, a tool thought to have been used in tasks like the preparation of seal hides for making skin-clad watercraft, or for processing foods such as shellfish, among hunter-gatherer communities some 6000-9000 years ago’.

‘Although these types of tools are well known on coastal sites on mainland Pembrokeshire and Cornwall, as well into Scotland and northern France, this is the first example from Skokholm, and the first firm evidence for Late Mesolithic occupation on the island’.

Dr David, who has directed excavations on similar sites in Pembrokeshire, noted; ‘To find an example on Skokholm is exciting’.

The discoveries did not stop there. As well as picking up a second Mesolithic pebble tool the following day, Richard and Giselle also noticed large pieces of coarse pottery being kicked out of the same rabbit holes.

This time it was Jody Deacon, Curator of Prehistoric Archaeology at Amgueddfa Cymru – National Museum Wales who recognised their significance. A large fragment from a thick-walled pot, decorated with incised lines around the top, is likely to be the rim of an Early Bronze Age Vase Urn, usually associated with cremation burials. Dating to between 2100 and 1750 BC, around 3750 years ago, such burial urns are not unusual in west Wales. However, this was also the first of its type from Skokholm Island, or from any of the western Pembrokeshire islands.

Plans to explore the archaeology of Skokholm Island

Archaeologists Toby Driver and Louise Barker from the Royal Commission, Wales, have carried out archaeological surveys on the nearby islands of Skomer, Grassholm and Ramsey. There are now plans to visit Skokholm later in 2021 with the other experts, as COVID restrictions allow, to explore these exciting finds further. Toby explained;

‘We know from past aerial surveys and airborne laser scanning by the Royal Commission that Skokholm has the remains of some prehistoric fields and settlements, though none has ever been excavated’

‘Now Skokholm is producing some amazing prehistoric finds. It seems we may have an Early Bronze burial mound built over a Middle Stone Age hunter gatherer site, disturbed by rabbits. It’s a sheltered spot, where the island’s cottage now stands, and has clearly been settled for millennia.’

‘Thanks to the sharp eyes of the wardens we have the first confirmed Mesolithic tools and first Bronze Age pottery from Skokholm. To date we have nothing similar from the larger islands of Skomer or Ramsey.’

‘Despite lockdown, the Skokholm wardens have been able to share detailed photographs and videos of their daily finds with experts around Wales. It means we can all share in the excitement of these new discoveries.’

Media enquiries to the Royal Commission, please contact: Nicola.Roberts@rcahmw.gov.uk
High-resolution versions of these images are available.

How wonderful to have found these relics! Thank you Mr. and Mrs. Bunny!! I can’t wait to read more about this discovery!

Really interesting finds. Raises all kinds of questions about how the island was used and inhabited.