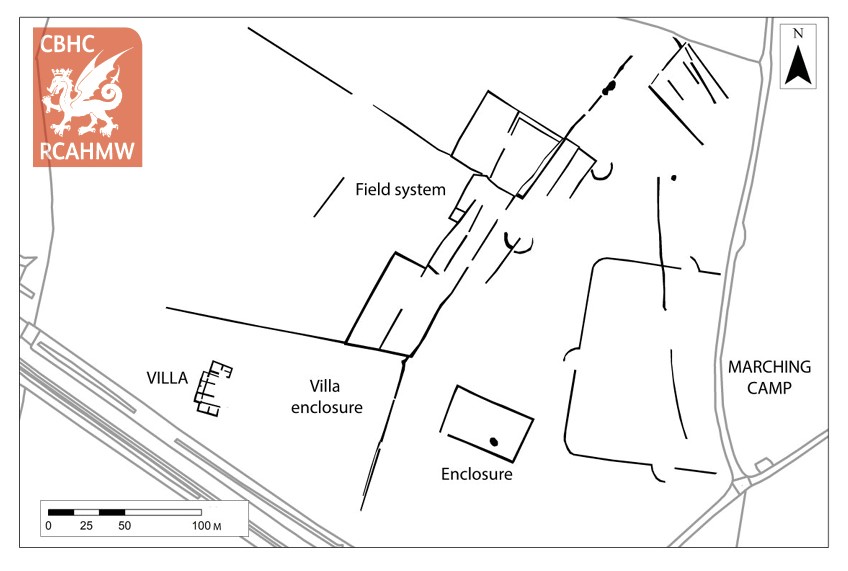 Major new study reveals aerial discoveries from Roman Wales, from the drought of 2018

A new study of Royal Commission aerial discoveries from the widespread drought of 2018 in Wales has just been published in the journal Britannia. Written by Royal Commission Senior Aerial Investigator Dr Toby Driver, together with Roman experts Professor Barry Burnham and Dr Jeffrey L. Davies, the study sheds new light on what we understand about the military conquest of Wales by Roman troops in the first century AD, and its subsequent Roman settlement.

The aerial photographs also clarified the plan of several known villas as well as identifying some potential villa sites and farmsteads of probable Romano-British date in south-east, south-west and north-west Wales. The recognition of a new Roman road alignment south of Carmarthen suggests a previously unsuspected coastal fort at or near Kidwelly, possibly now hidden by the medieval castle.

Dr Driver said; ‘Aerial reconnaissance in the drought summer of 2018 was exhilarating and intense, with new archaeological sites appearing below the aircraft right across Wales. Over the last year we have done more intensive research on the many spectacular Roman discoveries and it is great to now share this new knowledge with a wider audience’.

‘In particular, the Roman discoveries of a new fort and marching camp in the Vale of Gwent, south-east Wales, show the movement of the Roman army through hostile territory when there was still strong local resistance. Some 1900 years after these Roman fortifications were built, their plough-levelled foundations have re-emerged for a few brief weeks in drought-ridden grassland and crops.’

Flying the 2018 drought in Wales

The summer drought of 2018 in Wales broke several weather records. With little rain in April and May the drought continued into June with Porthmadog in north-west Wales registering the UK’s warmest temperatures on successive days in late June; 2018 also saw the warmest June on record for Wales, the sunniest June since 1975 and the fifth driest on record with only 21 mm rain.

Archaeological cropmarks and parchmarks began appearing across the country from the last week of June and continued until late July when sporadic, and then more persistent, rain showers rapidly returned brown fields to green as the harvest also progressed.  There was huge press attention on Wales as new sites were being revealed around the country (see https://www.bbc.co.uk/news/uk-wales-44806069), with further press stories during the year (see https://www.bbc.co.uk/news/uk-wales-46542523).

The Royal Commission responded to the 2018 drought with numerous long-range flights across the country in a Cessna 172 light aircraft, designed to sample the majority of landscapes before rain returned. In a three-week period in June and July 2018 some 5,700 aerial photographs were taken across Wales on 17 targeted flights, amounting to a year’s worth of imagery. Processing, researching and recording the evidence on those photographs has taken many months of hard work, resulting in some 200 new site discoveries across Wales.

Roman highlights from the 2018 flying. ‘Seeing through the soil’

The drought aerial discoveries captured public imagination. From the parched, brown land new archaeology was ‘popping out’ beneath the watchful eyes of aerial archaeologists. At the same time, known sites like Roman villas and forts were appearing with dramatic new detail, as if they had been ‘x-rayed’. This example shows the buried Wyndcliff villa near Chepstow in south-east Wales, with all its Roman rooms showing clearly.

The 2018 drought in Wales revealed two new Roman marching camps, one near Three Cocks in the Black Mountains and one near the Roman town of Caerwent in south-east Wales.

Marching camps were built by Roman troops on manoeuvres in Wales early in their military campaigns. In the 30-year struggle to conquer Wales, the Romans frequently clashed with the stubborn and warlike Silures tribe in south-east Wales. Marching camps were temporary overnight stops for troops who would ‘dig in’ to create a large rectangular defended enclosure filled with tents. They are still incredibly rare in south-east Wales – only 3 are currently known from the old county of Gwent – so the discovery of a new example near Caerwent in 2018 was very exciting. It is also the first camp in Wales to feature ‘outurned’ Roman defended gates, another rare feature for Roman Britain.

The new marching camp emerged in a field already recorded from the air for over 50 years; it’s incredible how much archaeology is hiding ‘in plain sight’. It was built to protect troops when this part of south-east Wales was still hostile territory; but it lies just west of the Roman town of Caerwent, Venta Silurum ‘Market town of the Silures’, where the pacified tribe was later settled.

A new Roman fort in the Vale of Gwent

Aerial survey in late June and July 2018 discovered a new small Roman fort at Carrow Hill, sited on the line of the Roman road between Caerwent Roman town and Caerleon Legionary Fortress. This is the first Roman auxiliary fort to be revealed in the Vale of Gwent. The ‘playing card’ shape of the square fort and annexe showed up very clearly. The 12-metre gap between the inner and outer ditches equates to the ‘killing zone’ specified in Roman field manuals, being the length of a javelin throw. Its closest comparators are in Roman Scotland. The cropmarks also reveal the Romans cut into existing prehistoric burial mounds alongside the new fort to make tile kilns.

Parchmarks in grassland revealed the previously unsuspected route of a Roman road running directly south from the Roman town of Carmarthen towards Kidwelly on the coast, a town more famous for its medieval castle. A Roman road had previously been guessed to run south or south-east from Carmarthen but was thought to be heading towards the Roman coastal fort at Loughor, west of Swansea. This new road now raises the possibility of an undiscovered Roman fort at Kidwelly itself, possibly obscured by the medieval castle and town.

Cropmark diagram, showing how cropmarks form in dry summers over the buried remains of lost prehistoric and Roman archaeological sites:

You can browse the full article from ‘Britannia’ here, courtesy of Cambridge University Press:
https://www.cambridge.org/core/journals/britannia/article/roman-wales-aerial-discoveries-and-new-observations-from-the-drought-of-2018/7D124572BA29692BA241FED037AEFB6F/share/0ec60d2670e60785200c6e63ad443cd5eeea6ca8