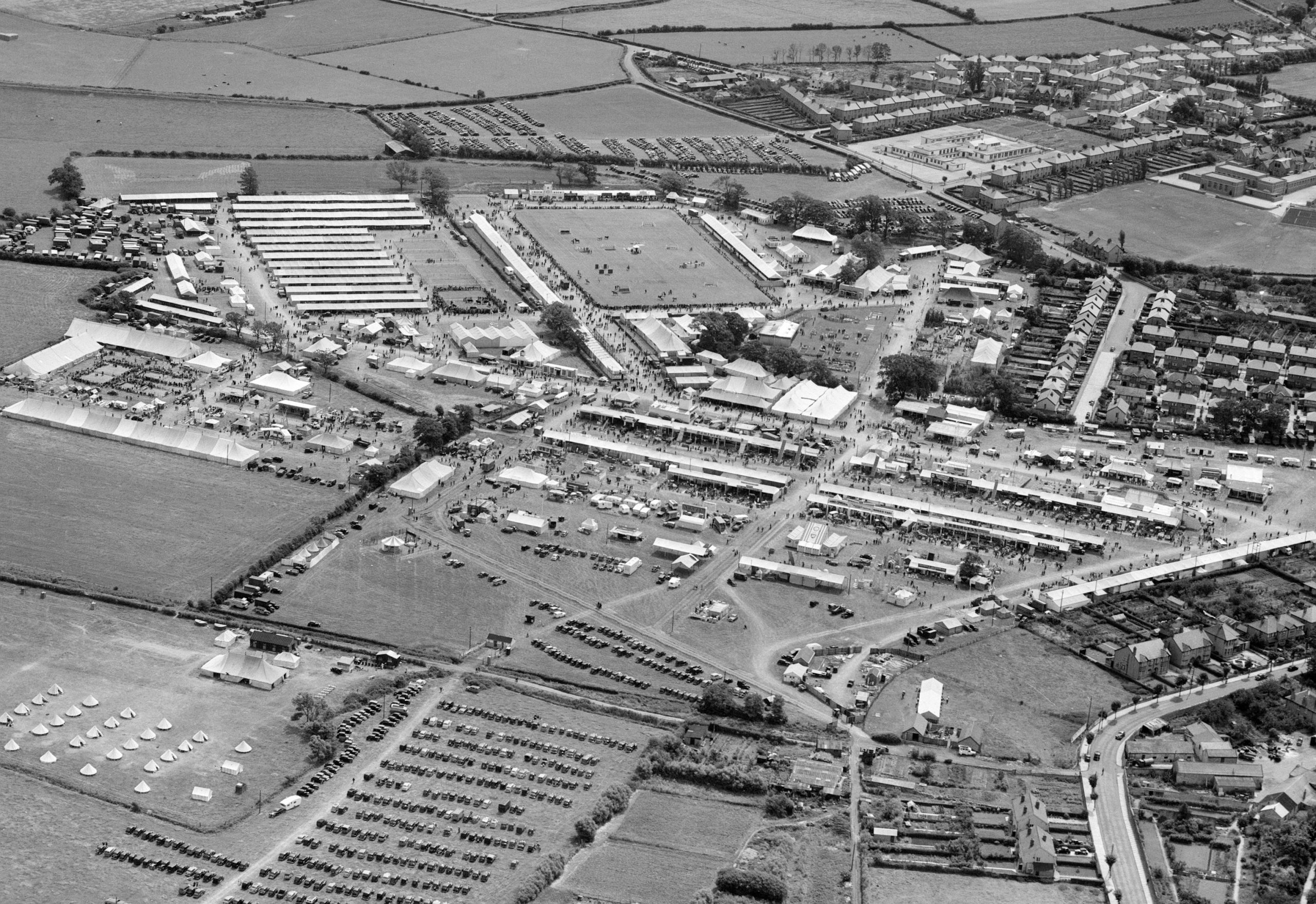 This year, the Royal Welsh Show will be a virtual event rather than being held at the showground at Llanelwedd, Builth Wells, because of Covid-19 restrictions. In this blog we look back to an earlier Royal Welsh Show which had a record attendance, partly due to the release of wartime restrictions including petrol rationing.

In July 1950 the Royal Welsh Agricultural Show was held at Abergele in North Wales and the discovery of a set of aerial photographs taken during the show, prompted us to find out more about those sunny three days in July 1950 when the British population had been newly released from their own ‘lockdown’ restrictions imposed during World War Two.

The Royal Welsh Agricultural Society was established originally as the Welsh National Agricultural Society in 1904; its aims were to improve the breeding of stock and to encourage agriculture throughout Wales. The first show was held in August 1904 at Aberystwyth and thereafter at 37 different locations, alternating between north and south Wales.

The Royal Welsh settled on its present site at Llanelwedd, Builth Wells, in 1963, since when it has developed into an annual four-day event and has grown into the most popular agricultural show in Britain, also providing year-round support for business, social welfare and education in rural communities.

This year, like last year, the Royal Welsh will be a virtual one. Find out about the range of online competitions and events at this year’s virtual Royal Welsh Show here: https://rwas.wales/royal-welsh/

The 1950 Royal Welsh Show at Abergele

Although a seaside resort, Abergele has always had strong connections with the local farming community, holding weekly cattle and sheep markets and, because of a strong breeding tradition locally, a monthly horse sale specialising in Shire horses.

These agricultural links meant a strong local attendance but holding the Royal Welsh Show at the seaside resort also had the advantage of being able to attract the thousands of holiday makers staying at the nearby camping and caravanning sites. Access to the show was well served with buses from Chester and Caernarfon, and Abergele had a train station with a large siding which could cope with trains of horse boxes within yards of the showground. There were newspaper adverts leading up to the show in the Liverpool Echo and other regional newspapers and people travelled from as far away as Hampshire to show their livestock.

1950 was only five years after the end of the Second World War and petrol rationing had just come to an end two months earlier. The 1948 Royal Welsh had been cancelled because of petrol rationing. Now anyone with a car was now finally able to go on trips after eleven years of severe war-time restrictions. This probably boosted numbers over the three days of the show and, with over 61,000 people attending, the 1950 Abergele show had the highest attendance figures in the history of the Royal Welsh up to that date, nearly twice as many as the last time the town had hosted the show in 1936.

The entries chart for the Abergele show is particularly interesting as the number and type of entries reflected the popularity of breeds. The 128 Shire horses entered in two classes highlight the importance of breeding Shires to the Abergele area. It also shows that the numbers had not reduced after the War when 98 shire horses were entered despite the rapid increase in petrol-driven farm vehicles. Entries for Show-jumping classes increased from 215 in the previous year to 241 which probably reflects the fact that Abergele was the Welsh centre for this sport.

There were also classes for Hunters, Welsh Mountain Ponies and Welsh Cobs which were ‘an outstanding feature of the show’.  The champion Welsh mountain pony stallion was ‘Eryri Gwyndaf’ owned by Mr Norman Lewis, the Welsh cob champion stallion was ‘Llwynog-y-Garth’ owned by A. D. Thomas. Cattle classes included Welsh Blacks, but numbers had declined at the Abergele show by about a third, and Shorthorns, once the most popular breed, were declining in favour of Friesian and Ayrshire breeds that gave a higher milk yield. Jerseys and Guernseys were included for the first time but in the ‘Other Cattle’ class. The Welsh Mountain Sheep classes remained steady, but the class for Welsh Pigs had twice as many entries as the previous year.

The lists of local winners include some with a world-wide reputation. The most famous was the late Miss M. Brodrick of Coed Coch, a name once synonymous with Welsh Mountain ponies.

The showground at Abergele

The Aerofilms photograph above shows the huge extent of Abergele Royal Welsh showground covering 68 acres. The weather during the three days of the show was warm and sunny and as can be see, the field was packed with people. The caterers were busy, as were the record number of traders on their 236 stands, given without charge that year.

There was a record entry of 3,400 animals which were housed on the field and could be viewed at close quarters as well while the various competitions were judged in the arenas.

Young Farmers Club competitions had competitors from every county in Wales; the dog show had nearly 1,000 entries. There was judging of poultry, racing pigeons, rabbits, and honey. The sheep dog trials and demos of crafts such as horseshoeing and thatching were hugely popular. Music was provided by the Rhyl Silver Prize Band and the Llandudno Scouts were on volunteer duty around the showground.

The National Agricultural Advisory Service held daily demonstrations and ‘farmers asked more questions than ever before’. The Women’s Institute was also present holding presentations on the theme ‘How the country woman feeds her family’ and exhibiting a wide range of baking. The Welsh Gas Board also had cookery demonstrations using the latest gas appliances.

The Aluminium Corporation Ltd from nearby Dolgarrog, which had made aircraft parts during the war, demonstrated how aluminium could be used for roofing, kitchen ware and farm implements.

The horticultural section included an enormous multi-coloured floral display by the Colwyn Bay Corporation, and Abergele children swept the board with ‘floral collection’ classes.

Perhaps the most interesting event was a demonstration by the Liverpool Mounted Police which then boasted the largest mounted contingent in Britain as they regularly patrolled the docks and were present at football matches and race meetings, including the Grand National. At Abergele they were all in full-dress uniform with plumed helmets carrying lances and, in the case of the inspector, a drawn sword. They were accompanied by the Mounted Police band and put on a display of highly-skilled horsemanship.

“For the grand finale they all rode down to the far end of the arena, formed a line side by side behind the inspector, he drew his sword, the riders lowered their lances and the inspector shouted “Charge”. They were galloping hard towards the far end of the arena and towards a long line of terrified visitors, some of whom had broken and started to run for their lives. With perfect timing the Inspector raised his sword upright and the charge stopped only inches from the flimsy rope fence”. [Abergele Field Club & Historical Society Review, No. 19 (2000), page 26].

The Royal Commission hopes to have its usual stand at next year’s Royal Welsh Show, and we look forward to seeing record numbers in attendance again as restrictions are lifted, as they were in 1950!

Reference: Some of the information in this blog comes from an excellent article by Vernon Hughes in Abergele Field Club & Historical Society Review, No. 19 (2000), pp. 19–26.

Find out about the online events at this year’s virtual Royal Welsh Show 19–22 July here: https://rwas.wales/royal-welsh/

See our record for Abergele which includes the Aerofilms photographs of the 1950 Royal Welsh Show: https://coflein.gov.uk/en/site/410566/images