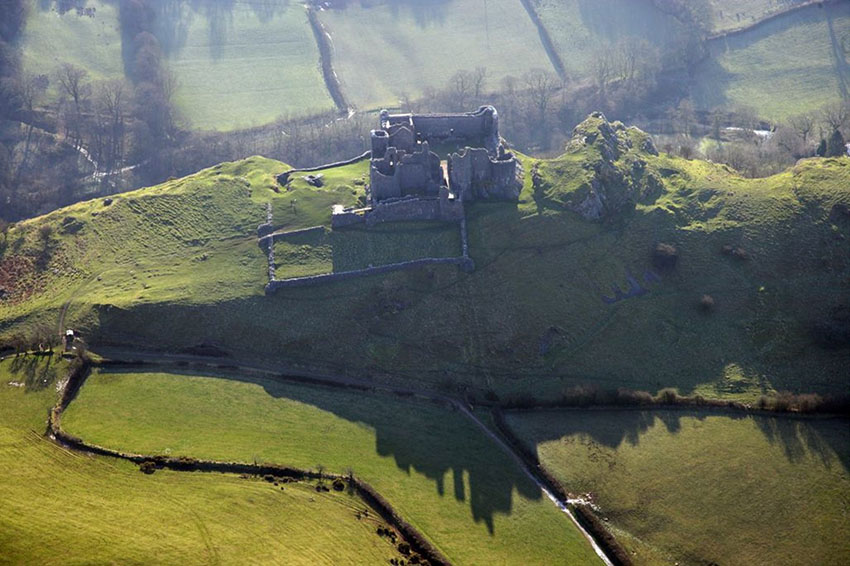 I have chosen this aerial image as, in my opinion, it beautifully captures two key aspects of Welsh heritage.

The first is the natural environment which in this instance is an area of Carmarthenshire on the western fringes of the Brecon Beacons. A distinct limestone crag sits between two faults and overlooks a deep valley through which the river Cennen flows. From the top, the view of the surrounding countryside is quite breathtaking, and the local sheep, the pedigree longhorn cattle, and prowling red kites attribute a further layer of identity to the area. Whether it’s a cold winter’s day or in peak summer season, the smells, the sounds, and the sights atop this crag are truly wonderful. Although I was born and brought up in Morriston, and am more familiar with the busy urban environment of Swansea and its suburbs than the peacefulness and tranquillity of a rural landscape, it is the case that wherever in Wales you may be, there are so many places on our doorstep (or a short car or bike ride away) that showcase the rich and diverse natural landscape of our country. The area of Dyffryn Cennen in the western parts of the Brecon Beacons, where Carreg Cennen Castle lies, is one such place.

The second aspect in this image is the built environment; Carreg Cennen Castle itself. The castle has a long history, changing hands several times and becoming a target for Owain Glyndŵr’s rebellion in 1403, and it was later seized and partially demolished by Yorkist forces during the Wars of the Roses. Although most of what remains is usually ascribed to John Giffard, a nobleman in the service of King Edward I who acquired the castle following the war of 1282, the castle is very much Welsh in origin.  The site very likely had a  hall or llys from the mid-twelfth century, later fortified with masonry defences by Einion ap Anarawd or the Lord Rhys (d. 1197), Prince of Deheubarth. Later construction phases by descendants of Deheubarth’s royal lineage are probable. Two other nearby castles, the equally dramatic Dryslwyn and Dinefwr, attest to this area being the heartland of the realm of Deheubarth. As a southerner, I feel that Deheubarth and the House of Dinefwr do not get the attention they deserve, in contrast to Gwynedd and its long line of princes which seem to always steal the Welsh limelight!

In addition to these two aspects, I have chosen the image because of the personal memories Carreg Cennen holds for me. As a small boy, I can remember visiting the castle a few times, wearing my wellies and coat during wet Saturday afternoons and being amazed at the magnificent site of the castle from below in the valley. With my father and brothers, we would traverse the winding path up from the working farm, have a photo taken trapped in the wooden pillory (which, sadly, is no longer there), and then explore the castle grounds and all its nooks and crannies, sometimes waving a wooden makeshift sword pretending to storm the battlements! I would have butterflies in my stomach too when venturing down the vaulted passage that is cut into the cliff-face to enter the natural cave. A torch was a must, of course, and my imagination used to run wild when exploring the cave which runs 50 metres into the hill. Roman coins have been discovered there along with human remains dating to the Upper Palaeolithic. Sadly I’ve never made a discovery of my own yet, but I live in hope!

Visiting Carreg Cennen Castle always inspired and stirred my interest in Welsh history and heritage, and along with the stories that accompanied these visits, incorporating legend and landscape, I can say that this particular site is one of my favourite places in Wales.