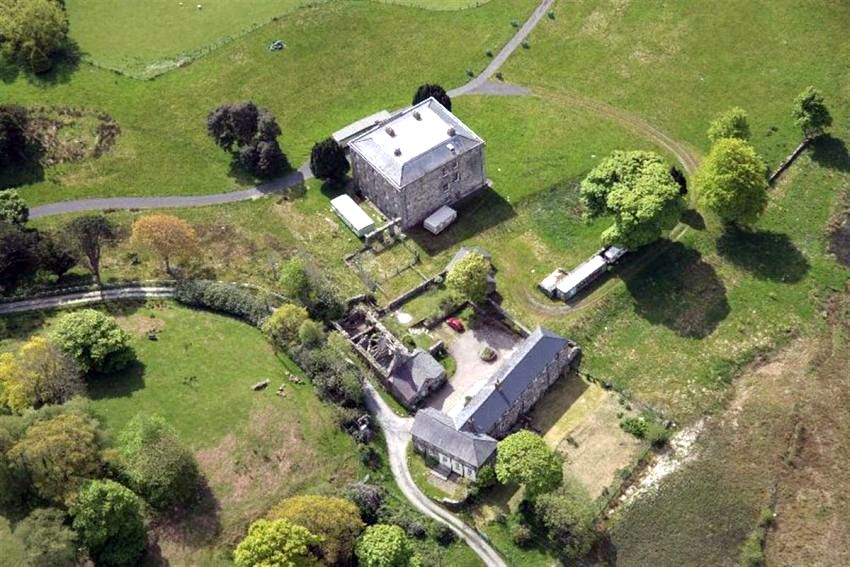 Nannau – ‘the place of many streams’ – has an interesting place in Welsh life, partly because of its long history. The house is located about three miles from Dolgellau some 700 feet above sea level, surrounded by acres of ancient trees and numerous picturesque cottages.

The existing house now stands silent and empty, however two hundred years ago it was at the centre of one of the largest estates in Merionethshire. The origins of the estate date back to the 12th century and unlike Dolgellau, the nearby county town of Merionethshire, Nannau was a free settlement in medieval times.

One of the most famous stories told in its long history was the alleged assassination attempt by Hywel Sele of Nannau on his relation Owain Glyndŵr. Hywel drew his bow to shoot a deer but quickly turned and aimed at his cousin instead. Owain was wearing chain mail under his shirt and survived. He is then said to have killed Hywel Sele and put his body into a hollow oak tree. This oak tree became known as Ceubren yr Ellyll (the haunted oak) and many ghost stories were told of its powers until it was struck by lightning in 1813.

The present house was completed by Sir Robert Williames Vaughan (1768-1843), a large, portly man who clearly enjoyed the food and game produced on his 12,000-acre estate. He built many whimsical cottages and farmhouses in the picturesque style, one shaped like a bottle of ink. Coed y Moch lodge had a clock set at six minutes to five – it took six minutes to reach the house from the lodge, so that all visitors to Nananu would never be late for tea!

An early 19th-century book of menus has survived which shows that the family ate very well from game shot nearby and from produce grown in the large walled kitchen garden half a mile away on the sheltered southern facing slope of Moel Offrwm.

Sir Robert provided work for out-of-work soldiers after the Napoleonic Wars, building over 70 miles of walls. He was also an enthusiastic builder of stone arches and four remain on the estate today, including Y Garreg Fawr spanning the road near the estate village of Llanfachreth. There are still great walks to be had on the estate and around Llanfachreth, including the Precipice Walk with fantastic views of the Mawddach estuary and Llyn Cynwch, and the Moel Offrwm walk with an Iron Age fort on its summit. On Moel Offrwm (the Hill of Sacrifice) estate staff would fire off rock cannons and light beacons to celebrate important events at Nannau. The number of ancient native trees on the estate are a testament to the investment by the Nanney and Vaughan families for the long term. Today, they provide an impressive contribution to the landscape for walkers.