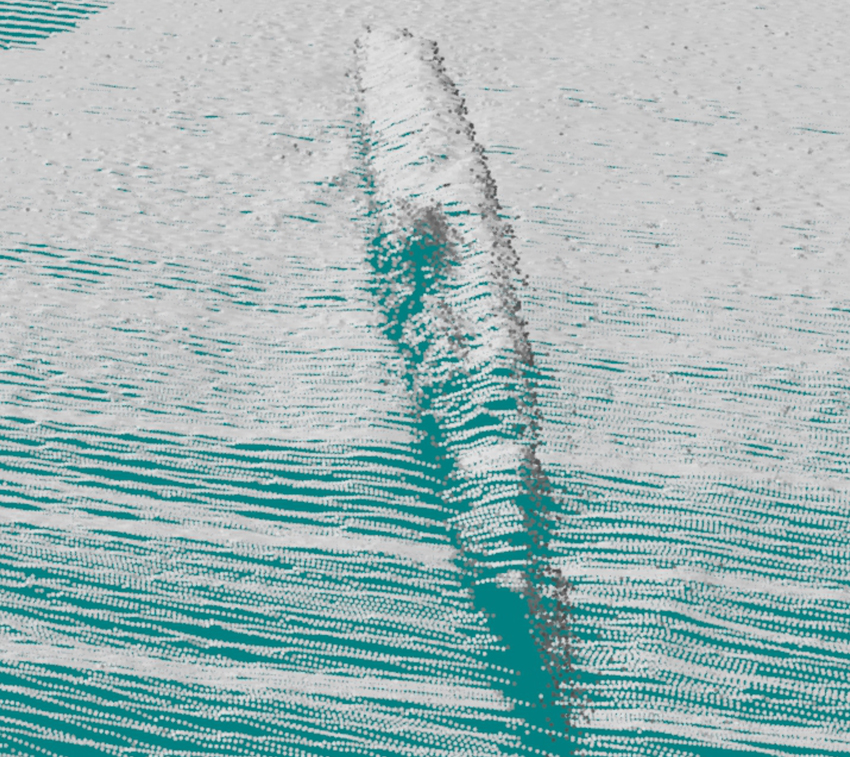 On Christmas Day 1917, U-87 attacked a convoy in St George’s Channel (in particular, the 4812-ton British steamship AGBERI). One of the convoy escorts, P56, was just 150 yards away from the AGBERI when it was struck and turned to ram the submarine while another escort, the BUTTERCUP, fired and hit its conning tower. Within 10 minutes the submarine had sunk.  Some witness accounts claim that the stricken U-boat was sliced clean in half, and that the bow section remained afloat for ten minutes with men visible within the submarine.

Now new imaging techniques have located the submarine with startling clarity. Staff from the Centre for Applied Marine Sciences at Bangor University have recently undertaken a number of ‘multibeam’ surveys around the coast of Wales as part of the marine renewable energy SEACAMS 2 project. The data collected has resulted in a number of very high-resolution models and images of the seabed and shipwreck sites of interest, such as the U 87. It is anticipated that results from this work will contribute to the overall aims and objectives of the potential HLF-funded project , ‘Commemorating the forgotten U-boat war around the Welsh coast 1914-18: Exploration, Access and Outreach’, led by the Royal Commission on the Ancient and Historical Monuments of Wales based in Aberystwyth.

A spokesperson from the Royal Commission said, “We’re really excited about the surveys which Bangor University are undertaking. They are allowing us, for the first time in perhaps 100 years, to actually see the relics of the Great War as fought at sea around the Welsh coast.  These are the underwater, out-of-sight memorials, mostly commemorating single ship actions, fought between merchant ships and enemy submarines. Each has a poignant story which should be retold through the Commemorative period. Some 170 vessels were lost to enemy action in Welsh waters, with many more sites around the world where Welsh men and women were on board at the time of sinking.  They are in effect, unmarked war graves. We salute the sacrifices made in time of war.”

Despite the eye-witnesses accounts, the new images of the stricken U-boat show it lying entire on the seabed entire.  Although the U-boat had been fatally holed, it sank to the seabed without breaking up. In the image to the bottom right, the large cut in the hull made by P56 can be seen slanting back to the conning tower. The crew did not escape and so there is a special poignancy to recognising that we are viewing a war grave, for perhaps the very first time in nearly a hundred years.

The Royal Commission’s research has established that the U-87 was an ocean-going attack boat built by Kaiserliche Werft, Danzig. It was commissioned on 26 February 1917 under the command of KapLt Rudolf Schneider. After a training period, it undertook five patrols sinking twenty-three ships and damaging two others.

On its fifth and final patrol, the U-87 departed Wilhelmshaven on 8 December 1917 heading to the western end of the English Channel via the Dover Straits. It sank two small sailing vessels on the way, and then on Christmas Eve, the 3238ton British steamer DAYBREAK off Northern Ireland. On Christmas day 1917, the U-87 attacked a convoy in St George’s Channel (in particular, the 4812-ton British steamship AGBERI, see NPRN 274777). One of the convoy escorts was just 150 yards away from the AGBERI when it was struck and turned to ram the submarine.

The logbook of HMS BUTTERCUP, an Arabis class sloop, provides the briefest of overviews of what happened:

03:30 While zig-zagging round AGBERI submarine spotted on surface. HMS P56 engaged and rammed it. BUTTERCUP fired and hit conning tower.

The report submitted by P56 contains more information, as can be seen in the image below (ADM137/4144, The National Archives Kew): 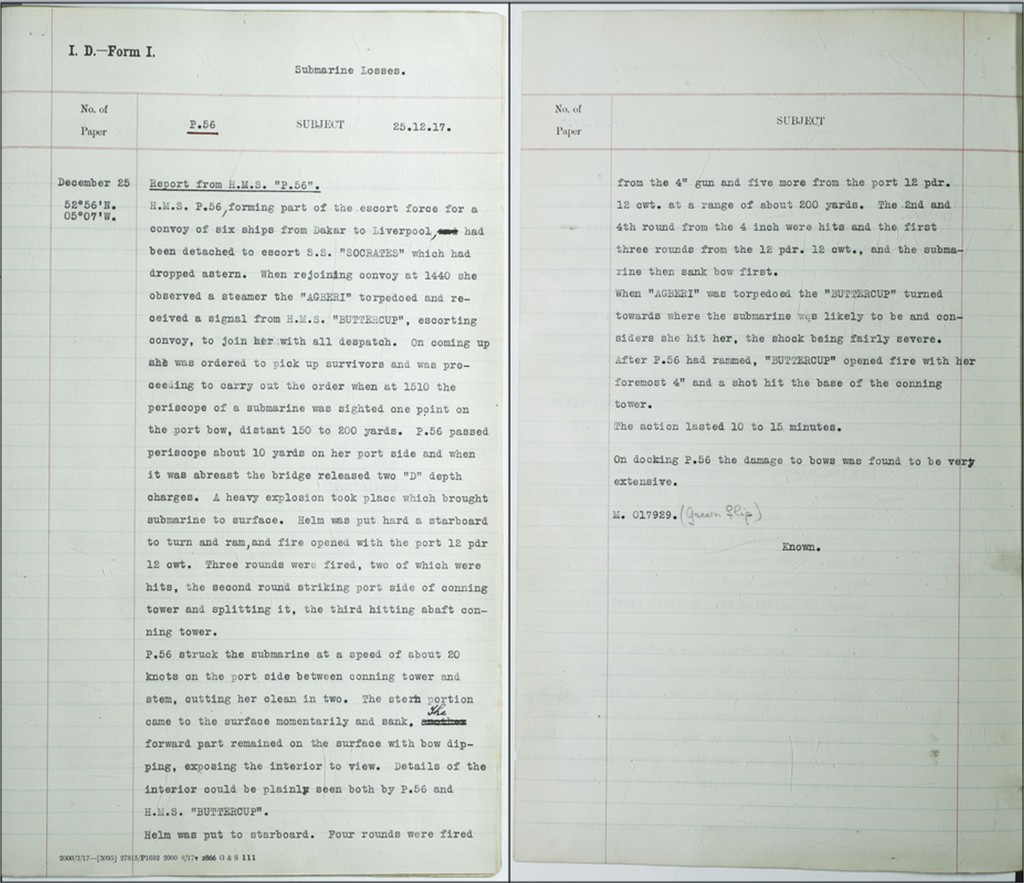 An image from a multibeam sonar survey of an area approximately ten miles northwest of Bardsey Island reveals the wreck of the U-87 which was lost with all 43 hands on Christmas Day 1917. The German submarine was rammed by a British naval vessel shortly after it had sunk a cargo vessel nearby.

The Royal Commission on the Ancient and Historical Monuments of Wales is the investigation body and national archive for the historic environment of Wales. It has the lead role in ensuring that Wales’s archaeological, built and maritime heritage is authoritatively recorded, and seeks to promote the understanding and appreciation of this heritage nationally and internationally. Website: rcahmw.gov.uk

ERDF-funded SEACAMS2 project is based at Bangor University and a partnership with Swansea University. The researchers at Bangor University’s School of Ocean Sciences and Centre for Applied Marine Sciences are undertaking collaborative research, including marine surveys, to support the sustainable growth of the marine renewable energy sector in Wales.

Nicola Roberts, The Royal Commission on the Ancient and Historical Monuments of Wales
nicola.roberts@rcahmw.gov.uk  Tel: 01970 621248