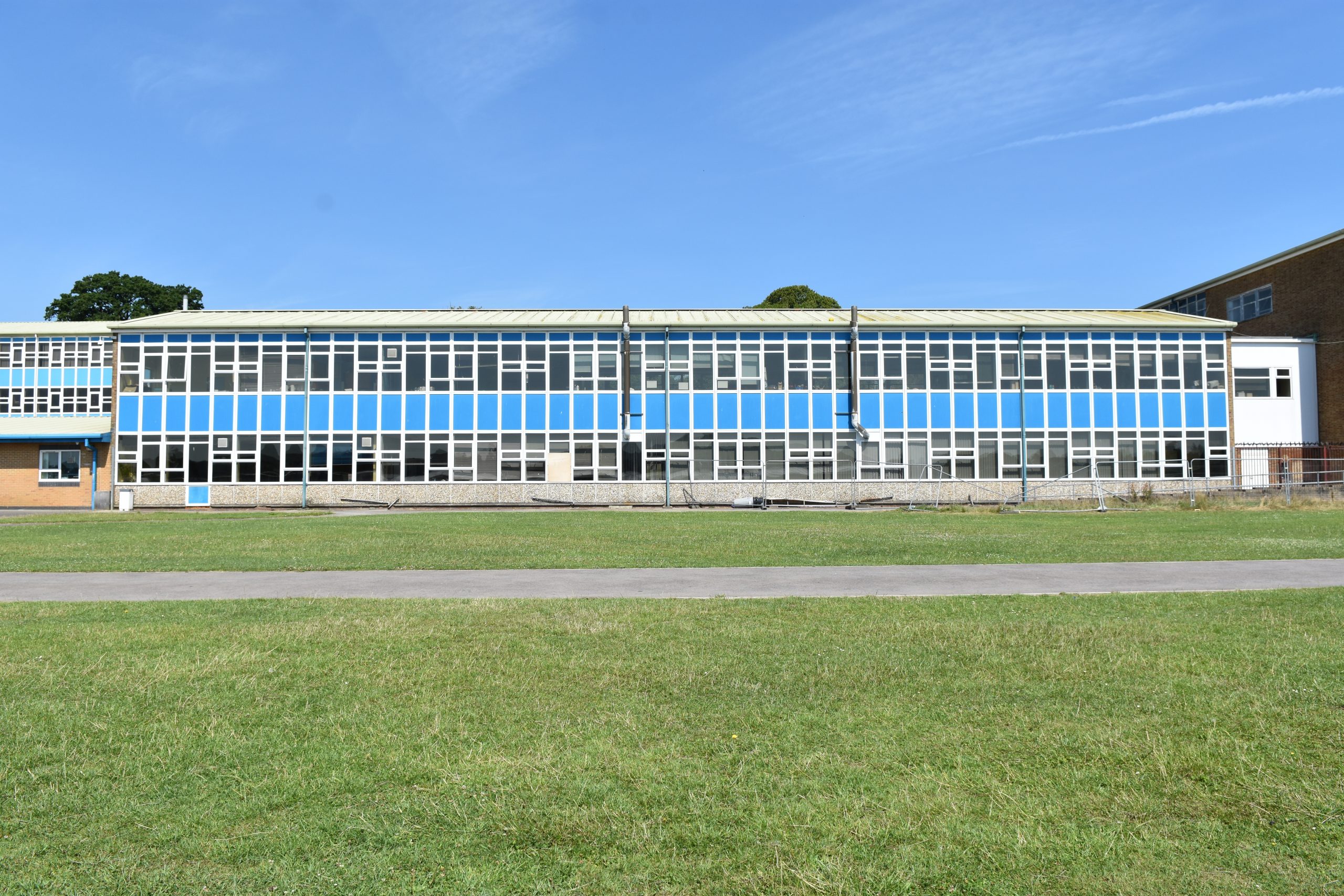 Major changes are happening to the educational estate in Wales under the Welsh Government’s 21st-Century Schools Programme. Dr Meilyr Powel of the Royal Commission on the Ancient and Historical Monuments of Wales considers these developments and their effects on the built environment.

You may have noticed it already but in case you haven’t, enormous changes have been taking place in Welsh education. Perhaps the headline act is the rolling out of the new Curriculum for Wales with its six Areas of Learning and Experience facilitating a more holistic approach to studying topics and giving greater flexibility for teachers to shape the curriculum.

Measuring the impact and success of the new curriculum will take some time, but one immediate and much more visible change has been the educational estate itself. In 2009 the Welsh Government announced its 21st Century Schools Programme, a long-term capital investment programme to improve learning environments and educational outcomes. Its implementation began under the 2011–16 administration of the Welsh Government. The programme represents the largest strategic investment in Welsh educational infrastructure since the 1960s and involves a collaboration between the Welsh Government, local authorities, further education institutions, and dioceses to reform the schools and colleges estates and create environments more conducive to modern teaching practices.

Consequently, hundreds of schools across Wales have experienced closures, amalgamations, refurbishments, extensions, and demolitions. Brand new multi-million pound schools have been built, such as Cardiff West Community High School, that hint at a new dawn for education in Wales. New 3-16 and 3-18 ‘all through’ schools, once prevalent in the English private school system but now increasingly present in Wales’s state sector, reflect particular thinking among educationists.

The cold numbers show a significant decrease in the number of maintained schools in Wales since the turn of the millennium, accelerated by the current 21st Century Schools Programme. As of March 2022, there were 1,472 maintained schools in Wales; compared with 2008, there are now over 330 fewer schools in Wales, and an estimated 500 fewer schools since the turn of the millennium. This is even though pupil numbers have not witnessed a drastic decrease overall, with 474,370 pupils in Wales in 2008 compared with 473,066 in 2021, suggesting larger schools have become more commonplace.[1] On average, around 23 schools per year have closed since 1999, representing a 25% decrease in overall numbers. Some of these schools still stand, however, having been repurposed for other use or lie derelict as they await their fate.

History of schools in Wales

Locating these developments in the greater context of Welsh education highlights just how significant they are in shaping our historic landscape. Tracing the history of education in Wales from medieval times shows just how many types of schools there have been, from the medieval grammar, choral, and monastic schools to the circulating schools and emerging Sunday schools of the eighteenth century; the National and British elementary schools, the dame, and the industrial schools of the nineteenth century; through to the intermediate (county), grammar, secondary, technical, and comprehensive schools of the twentieth century.

The organisation and running of schools in Wales have varied considerably over the years. From 1833, state grants were made available for the first time and gradually schools came under the control of local authorities. Then in 1862 the Revised Code of Regulations required schools that were eligible for state grants to keep logbooks – a valuable source of information for historians today. Various education acts in 1870, 1889, 1902 and 1944 then saw the creation and abolition of school boards; the introduction of county education committees and local education authorities; the development of intermediate and secondary education; and finally, the establishment of a tripartite system of grammar, secondary modern and technical schools which, under the Butler Education Act of 1944, guaranteed secondary education for all. Public education had become, by the middle of the twentieth century, a three-stage process of primary, secondary, and further education.

Following the Second World War, as the enormous task of the country’s reconstruction programme began, a few progressive local authorities introduced a comprehensive school system in the late 1940s and early 1950s, reflecting a wider climate of egalitarian aspirations. The National Health Service, established in 1948, signposted a new age of welfare provision and broader state responsibilities, and a programme of better public housing was launched as a matter of urgency, evoking David Lloyd George’s promises of ‘homes fit for heroes’ a generation earlier. Crucially, national and local initiatives brought experts together from various backgrounds – the political, the scientific, the industrial, and architectural – and several county councils and boroughs established architects’ departments to better facilitate reconstruction efforts.

Attention turned to education and from the early 1950s onwards a large building programme of secondary schools across England and Wales took place. Two contributing factors to this schools building programme were the general dearth of secondary schools across the country along with the rise in Britain’s birth-rate from the mid-1940s onwards. Combined, these problems necessitated the expansion of existing schools and the building of new ones.

In a move that somewhat broke with the past, architects and educationists increasingly worked together to design the new schools; this was a trait that emerged from the war where a user-designer relationship had enhanced operational research into war materiel and then later during Hertfordshire’s school building programme in the late 1940s and early 1950s where designer, manufacturer, and user were all involved in the building process. As Andrew Saint (1987) put it:

Buildings were to be the embodiment of a continuous, developing process between architect, client, user and maker, whereby the architect would regularly scrutinise every detail of the others’ means, habits, hopes and requirements […].[2]

New concepts of space, interdepartmental planning relationships, scale, ranges of specialised furniture and equipment combined with a new attitude to robustness, were among the essential aspects of [secondary school] design.[3]

These ideas quickly spread and became visible in Wales’s post-war school buildings, as at Bishop Gore School in Swansea, designed by Ernest Morgan and H. T. Wykes and opened in 1952.

In Powys however, County Architect Herbert Carr (d.1965) designed several schools, such as the secondary schools in Llanidloes, Welshpool and Machynlleth, and area primary schools at Abermule, Dolfor and Trewern. Carr’s architecture differed to his contemporaries in Wales in that his schools mixed modernist style with Neo-Georgian that reflected a more harmonious relationship between old and new in rural settings. Classical influences, clean symmetric lines, and frequent use of brick in uniform colour distinguished Carr’s schools across the county.

The post-war school building programme in Wales continued well into the 1970s. Functional modernist blocks with panelled cladding and specialised classrooms became commonplace such as at Morriston Comprehensive School on the outskirts of Swansea, which opened in 1971 and was designed by City Architect, J. G. Gwilliam; and Bryn Hafren Girls Comprehensive School in Barry, built 1969–73 to the designs of Percy Thomas Partnership, which combined brick and panelled cladding to create a striking façade.

And by the 1970s, a new architecture had emerged in the civic domain: Brutalism. Two noteworthy Welsh schools were built in this period to this particular and striking design. The first was Newport High School, Bettws (1969–72), designed by Eldred Evans and David Shalev, and described by John Newman as ‘a brilliant exposition of concrete construction, modular design and orderly planning’.[4] In 2009 the school was demolished.

The second Brutalist school was Argoed High School in Mynydd Isa near Mold (1977–81), built to the designs of Clwyd County Council Architects K. J. Denley and J. Brian Davies. Set in a rural landscape, the school buildings are a series of connected teaching blocks with angled walls and roofs. Argoed was Clwyd’s first purpose-built school following local government reforms in 1974. Brutalist architecture does not appeal to everyone, but nevertheless, the communal value of these buildings, along with all other post-war school buildings, deserve recognition even if their translation to architectural beauty falls short of mis-placed expectations.

The post-war period up until the end of the 1970s was one of great change in the education system – an ‘education boom’ if you like – with the Central Advisory Council for Education commissioning a series of reports covering the whole range of the school system, and the wartime ethos of social idealism permeating government policies to ensure equality and opportunities in education, despite periods of pushback and opposition from the Right. The new architecture of school buildings reflected the social needs of a growing population and the period from the mid-1960s to the early 1970s represented the maturity of post-war school development, bringing with it new trends such as the idea of community schools.[5]

However, under the 21st Century Schools and Colleges Programme – currently in its Band B Phase, officially known as the Sustainable Communities for Learning Programme – many schools have seen alterations or faced closure and demolition. The Band B phase began in April 2019 and sees a further £2.3bn investment in school and college infrastructure in Wales. Twentieth century post-war schools in particular have seen major changes: Morriston Comprehensive School was demolished and rebuilt between 2012–14 at a cost of around £22m; Pencoedtre (formerly Bryn Hafren) is being demolished after a new £34m building opened its doors in January 2022; and Argoed High School also faces demolition with plans in place to create a combined primary and secondary school campus on site.

The Programme has seen hundreds of schools altered in some way; an estimated 30% of all maintained schools whether through refurbishing, extension, closure, amalgamation, or demolition. Several have successfully been repurposed for other use, but these are often schools built in the nineteenth or early twentieth centuries. Ysgol Gynradd Llangynfelyn, Ceredigion, for example, was built in 1876 but following closure in 2016 is now used as an antiques shop. Ysgol Bronyfoel near Caernarfon, built in the mid-nineteenth century, has been converted into a community centre and bunkhouse accommodation, whilst Narberth’s former County Intermediate School, built 1895–96, is in use with local businesses.

But there are plenty of examples also where former school buildings have been demolished or are currently earmarked for demolition, posing a threat to our heritage. A considerable number of post-war schools in particular – both primary and secondary – have been demolished under the 21st Century Schools Programme. Safeguarding these buildings from demolition relies mostly on Listing status. As of March 2022, there were 1,472 maintained schools in Wales; 1,219 primaries and 182 secondaries.[6] And yet, there are just six post-war schools listed in Wales, all dating from the immediate post-war period.

Keeping abreast of the developments happening under the 21st Century Schools Programme is an ongoing task of the Royal Commission. Recording work has taken place at schools due for demolition such as at Ysgol Bro Hyddgen (Bro Ddyfi), Machynlleth, Cantonian and Cathays high schools, Cardiff, and Pencoedtre (Bryn Hafren), Barry, whilst others have been identified for future recording. Work must continue to be done to record and interpret those nineteenth and twentieth century schools that still stand, especially as they come under threat of closure and possible demolition.

With much of heritage concerning our relationship with the built environment, it is important that we should try to recognise the value – cultural, social, and architectural – of the buildings that serve, and have served, as public places of learning and as community focal points across the country for so long. As the 21st Century Schools Programme forges a new future for Wales’s education, we must also be wary that our past is not completely demolished and forgotten in the process.