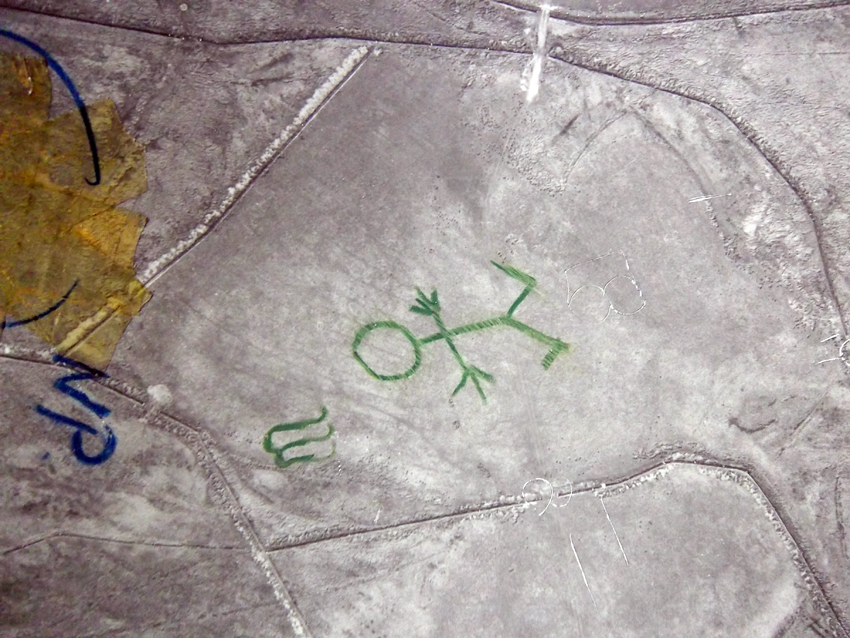 Since the early days of cartography, those working on the maps have often hidden signatures or symbols within the complex lines and lettering.

The Royal Commission holdings of aerial photographs include a sizeable collection of large Ordnance Survey prints. They were used by the cartographic officers, who would note any changes in the landscape for updates to UK mapping. The workforce was very highly skilled, but there were often tedious and repetitive tasks. A few of the prints show evidence of their frustrations – and occasionally, a sense of humour.

On a photograph taken in the middle part of the 1970s, a newly identified antiquity is marked with a standard recognised annotation – and a drawing of a matchstick man. Another print shows a simple race circuit in a field, where the cartographer has written “Big Boot”. On a photograph of Llyn Clywedog, a cartoon drawing of a battleship is marked “Tirpitz”. During the 1970s several land drainage schemes needed to be plotted on large scale maps. One member of staff wrote “Phoorrrrrr Tremendous drains”.

These annotations are as interesting as the images themselves, and will be kept as part of this important collection.