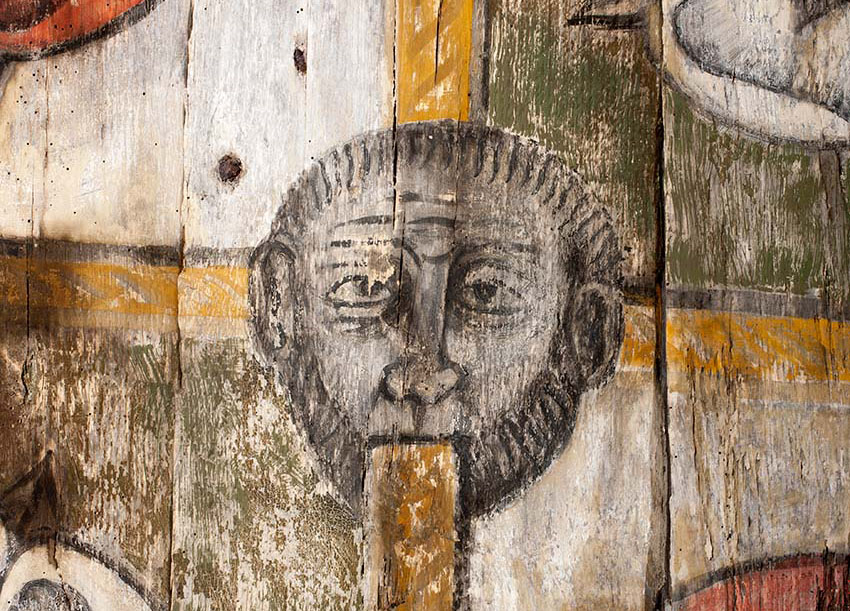 A magnificent new book on wallpaintings in Welsh churches has just been published by the Royal Commission on the Ancient and Historical Monuments of Wales.This superbly illustrated book is introduced by Rowan Williams, former Archbishop of Canterbury, as “a welcome and treasurable survey of a long-neglected area of Welsh cultural history.” This book draws the reader into the world of late medieval churches which were painted from roof to floor with figures, patterns, and instructive scenes, sometimes with humour as well as piety. This authoritative book gives a fresh sense of the vibrancy of medieval Welsh church interiors. There are case studies of the extraordinary painted interior recently discovered at St Cadoc’s Church, Llancarfan (near Cardiff), and the wallpaintings rescued from St Teilo’s Llandeilo Tal-y-bont, and painstakingly recreated at St Fagans open-air National Museum of History.

Readers will want to make a special pilgrimage through the narrow, leafy lanes of the Vale of Glamorgan to view the newly discovered and exceptionally large and detailed painting of St George and the Dragon at Llancarfan by an unknown master. Llanelieu Church (now in the care of the Friends of Friendless Churches) buried in the countryside near Hay-on-Wye uniquely preserves the painted screen and boarding between nave and chancel. The painted grotesques over the chancel at St Mary’s Church, Talyllyn, are surprising and unforgettable.

At the Reformation churches were visually transformed with the obliteration of wallpaintings, which disappeared under coats of limewash. As the painted image was supplanted by the painted word, so the polychrome church interior became predominantly black and white, apart from the few splashes of colour provided by painted monuments and the Royal Arms – a forceful visual expression of the new relationship between church and state.

Post-Reformation inscriptions unmistakably show the increasing status of the Welsh language. Painters emerge as named personalities in the seventeenth century and included Thomas Jones of Hereford and Brecon who left a wonderful verse autobiography (published in 1641) full of picaresque incidents.

Inscriptions were less visible in the later eighteenth-century as churches became a more cluttered social space. Walls and ceilings became increasingly bleached of colour as limewash was applied liberally inside and outside the church. The rediscovery of the colour of the medieval church by antiquarian-minded parsons in the mid-nineteenth century was a revelation, though not without controversy, as high churchmen and low engaged in battles over the propriety of colour and imagery in churches.

This large-format, bilingual book is magnificently illustrated with 275 images and is astoundingly good value at only £29.95 from all bookshops and the Royal Commission’s own online shop.

The author Richard Suggett is Senior Investigator (Historic Buildings) at the Royal Commission.

All images © Crown copyright: Royal Commission on the Ancient and Historical Monuments of Wales (RCAHMW).