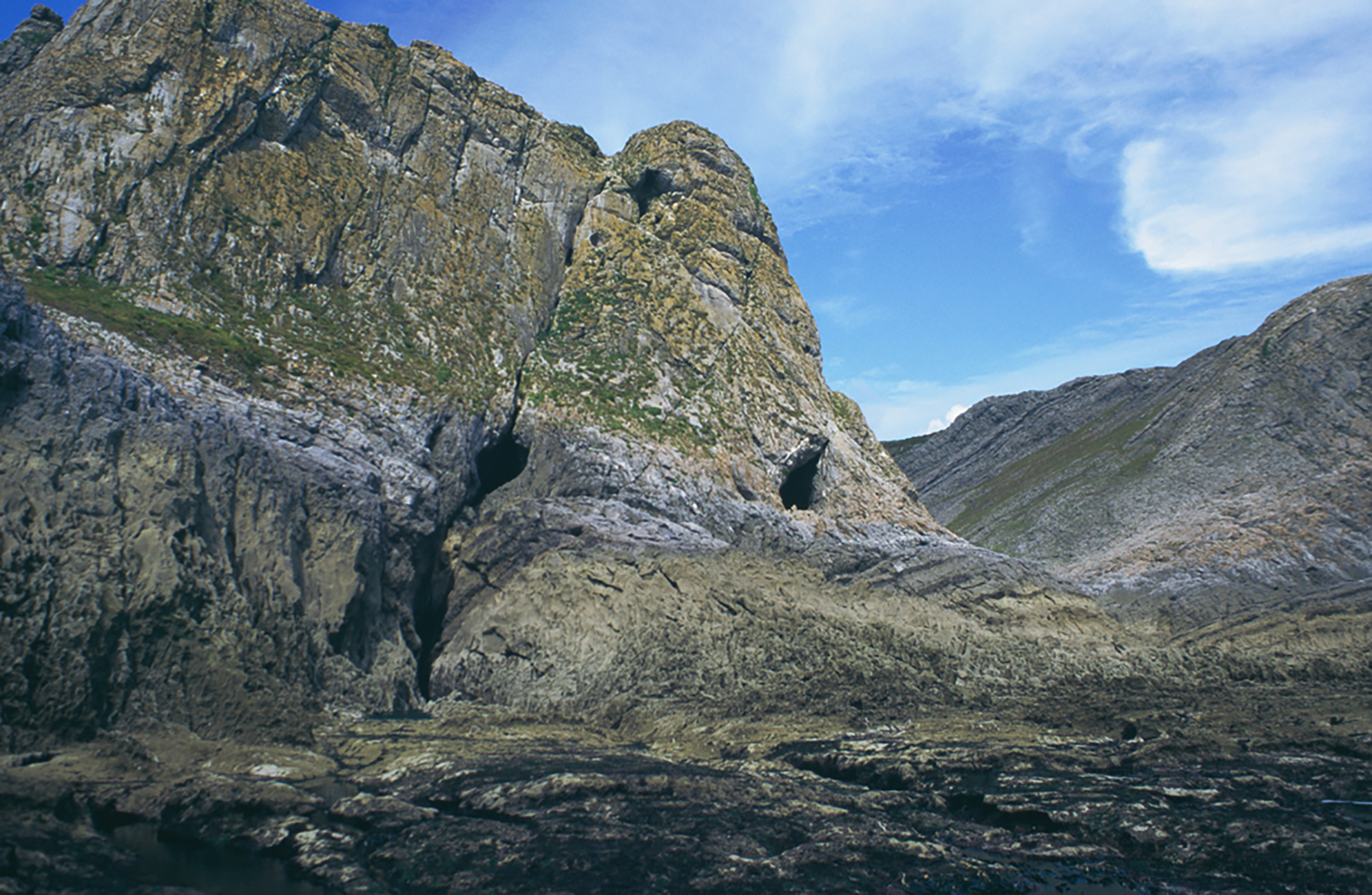 The rugged limestone sea cliffs at Paviland on the coast of south Gower, steep in places and pock-marked with fractures and cavities, are home to one of the most important prehistoric archaeological sites in Britain.

Paviland Cave (originally known as Goat’s Hole) is the most prominent of several closely-spaced cave openings beneath the 30m high cliff. This short, 23m long, passage was occupied throughout Prehistory but is best known for its use during the so-called Early Upper Palaeolithic period, in the later stages of the last Ice Age. In particular, it is the location of the misnamed ‘Red Lady’ burial, discovered in 1823, whose time of death has recently been re-dated to around 33-34,000 years ago. It is the oldest anatomically modern human skeleton found in Britain.

The Royal Commission surveyed the site in 1997 in order to provide the first modern measured drawings of the cave as part of a comprehensive, multi-disciplinary re-evaluation of the site and its finds, a review which engaged specialist partners from across the world. By then the cave had a long and complex history of excavation and collection spanning almost 200 years. In addition to the burial, some 5000 flint artefacts had been recovered and numerous items of bone and ivory. At a time of growing awareness of the site’s importance the review was triggered by the need to assess the status of surviving cave deposits in the face of intensified coastal erosion. It soon became clear that all archaeological layers – which had once almost filled the cave – had been totally removed. But scientific re-evaluation yielded important results, despite the lack of stratigraphic context for early discoveries, and research continues to the present day. The cave is now a coastal site accessible only at low tide but when it was visited by Ice Age hunters the environment they experienced was vastly different. Britain was then a peninsula on the north-west corner of Europe. Sea level was some 80m lower than today and the cave was located more than 100km inland. It occupied high ground with commanding views across a broad plain of arid grassland – what is now the Severn Estuary – and the hills of south-west England beyond. Animal bones recovered from the cave show that local pasture supported large herbivores such as wild horse, mammoth, woolly rhino, bison, and reindeer.

The oldest flint artefacts from the cave date from the final stages of the later Middle Palaeolithic period. These take the form of ‘leaf points’, likely weapon tips, of a type dated to about 40-43,000 years ago. They may have been made by the last indigenous Neanderthals, another species of human, to occupy this part of Europe. But a much larger number of finds belong to the succeeding ‘Aurignacian’, a cultural horizon identified with the first modern humans to enter western Europe and who eventually replaced the Neanderthals. It is to this horizon that the burial is thought to belong. Paviland is the richest Aurignacian site in Britain, one of a small number to have survived glaciation and sea level rise. The movements of reindeer may have played an important part in first attracting Aurignacian hunters to the British peninsula. Seasonal migration routes along what is now the English Channel would have drawn reindeer (and humans) to the higher ground of Atlantic west and north-west. The cave was probably occupied intermittently over many thousands of years, alternating with its use by bears, wolves, and hyenas. Paviland, like the rest of Britain, would have been empty of humans for long periods, only visited during ‘interstadials’, less cold episodes in an otherwise ice age climate.

The burial was that of a healthy young adult male under the age of 25, placed in a small alcove against the cave wall. He was accompanied by grave goods: rods of mammoth ivory, intentionally broken before being laid on his body, and a mammoth skull positioned at the head of the grave but now lost. Pierced shells and ivory rings were also found, perhaps sewn within, or suspended from his clothing. Following interment, the bones soon became stained with red ochre pigment, possibly from his now-decayed burial clothing or perhaps added to the grave as a ritual gesture. This would make the ‘Red Lady’ one of the oldest ritual burials in Europe. Recent analysis of his bone protein shows that he had a varied diet comprising 20% fish balanced by other foods such as horse, reindeer, roots, acorns, and berries.

The fate that befell the young man is unknown though a hunting accident is more than likely. Life on the remote, northern margins of Ice Age Europe could be precarious. Humans were relatively few in number, at times an endangered species, living in a harsh environment with fluctuating populations of prey animals, and surrounded by predators. It is not known how frequently the cave was revisited after the burial, if at all. In any case, as the climate worsened further with the advancing ice sheet of the glacial maximum, the entire region would have become increasingly uninhabitable, and eventually the cave was abandoned altogether. Nevertheless, the expanding ice sheet stopped a few miles short of this point, preserving the cave for future generations to investigate.

Watching a tv programme re: red lady which lead me to want to know more. Enlightening to learn more about our long distant past. At age 70 (almost!) the need to continue to learn keeps me going.