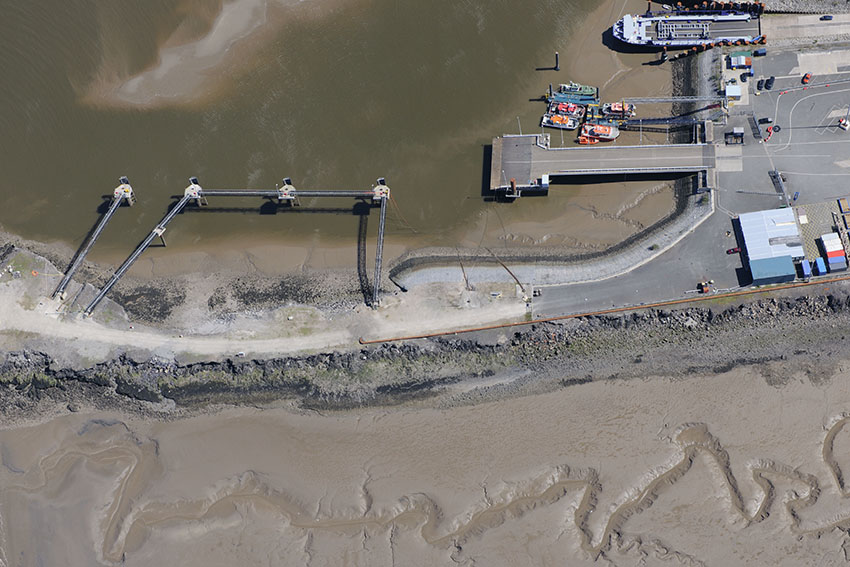 Most people are familiar, at least in passing, with the need to gain planning permission before building things on land: a house, office building, roads, etc. Less well known is that the planning system in the UK also extends into the sea. This is important because a lot of construction and development takes place in the marine zone which needs to be assessed to ensure it is appropriate and does not unnecessarily damage the marine environment or restrict/prevent access to it for other users. Work such as the construction of offshore windfarms, laying communication cables, dredging harbours, or building/repairing coastal defences all require the granting of a marine license before a project can start.

This process, broadly termed ‘marine planning’, is overseen by Natural Resources Wales, and the Royal Commission has an important role as a statutory consultee concerned with the consideration of cultural heritage within Wales’s marine zone (see map). In summary, this means that we assess each marine licence application for any potential impact that the project might have on maritime archaeology. This includes all types of archaeological sites, from shipwrecks and aircraft to fish traps and submerged forests. We must also consider the potential impact during the construction of the scheme, its use, and (if applicable) when it is decommissioned at the end of its life.

To assist in this process, industries have developed standard methodologies for dealing with archaeological sites in the marine zone. In the case of an offshore windfarm, the area being developed is surveyed at the beginning of the project to locate any exposed archaeology. The survey results are also cross-referenced against sources such as the National Monuments Record of Wales (NMRW) maintained by the Royal Commission and the database of known shipwrecks held by the UK Hydrographic Office. This process helps a developer avoid any shipwrecks or other archaeological features in their project area. This is confirmed through establishing archaeological exclusion zones (AEZs) around specific points of interest within which wind turbines will not be built and the cables exporting electricity back to the land will not be laid. For this process to be effective we must make sure that the part of the NMRW covering the marine zone is as up to date as possible.

Sometimes projects encounter archaeology that is not previously known about. This is not surprising, as around three-quarters of the ships known to have sunk in Welsh waters have never been located. The detailed survey work in advance of construction can find wrecks that nobody knew about – in turn helping to enhance the NMRW. Newly discovered wrecks must be assessed to try to understand how important they are. More rarely, buried wrecks can sometimes be encountered during construction itself. In the latter case, work stops immediately while the importance of the site is considered. This entire process is explained in a freely available document produced by the Crown Estate, which owns much of the seabed around the UK.

Projects that need a marine licence also take place much closer to land, and often straddle the area between low-water and high-water which is known as the inter-tidal zone. Schemes for coastal defence, laying cables for communication or electricity, or repairing/building harbours usually have elements within the inter-tidal zone. Archaeological planning in this area is the responsibility of the four Welsh Archaeological Trusts (Dyfed, Gwynedd, Clwyd-Powys and Glamorgan-Gwent). But the specialist expertise held by the Royal Commission for maritime archaeology means that we are also consulted about projects which take place in the inter-tidal zone.

Work in the inter-tidal zone is often much more restricted for space. In the open sea it is possible to re-route a cable to avoid a shipwreck. But when building a coastal defence system, options can be limited as to where a seawall can be placed. It is sometimes much harder, or impossible, to simply avoid impacts on an archaeological site, and so mitigation may have to be considered. This process aims to minimise the overall impact of the work on the archaeological record. For something like a fish trap this might mean undertaking a full, detailed survey of any archaeological remains before and after the work. This allows the fish trap to be preserved through recording it, called preservation by record, while also being able to firmly conclude what the impact of the project was. That in turn allows a better understanding of the impact of similar work at other places in the future. In some circumstances, the archaeological site and the building work might both be extremely important, and so, as on land, the best option to preserve the former and allow the latter is to fully excavate the archaeological site.

All cultural heritage is a finite resource, but the archaeology of our coasts and seas is especially fragile. We live in a world where marine and coastal development work, along with efforts to mitigate climate change and its resulting impacts, continue to increase. Therefore, the role of the Royal Commission in ensuring that Wales’s marine cultural heritage is properly considered and looked after is ever more important. In the second half of 2021 we responded to 24 consultation requests situated all around Wales (see map). These projects were related to offshore wind farms, coastal defence work, infrastructure maintenance, marine aquaculture, seabed sampling and harbour dredging. We expect 2022 to be just as busy with some major large-scale projects for new offshore windfarms ongoing, while at the same time, smaller projects seek new ways to utilise our seas, such as seaweed farming. Both these types of marine development, in their own different ways, offer a route to helping achieve net-zero carbon that we must achieve as a society. The work of the Royal Commission means that we will always have both eyes on the cultural heritage of our shared past, while we look to the future.

What are the stars in red wharf bay and Penmon?

Hello. All the red stars on the map are locations that we have been consulted on for marine license applications in the second half of 2021 (the most recent period). The applications come to us through Natural Resources Wales and details of all the major works for schemes such as coastal defence, wind farms, etc. are listed on their ‘Public Register’ where then can be inspected during the consultation period. The one at Penmon – actually offshore to the east of Puffin Island – is an application for marine aquaculture, in that instance growing mussels. While at Red Wharf Bay… Read more »