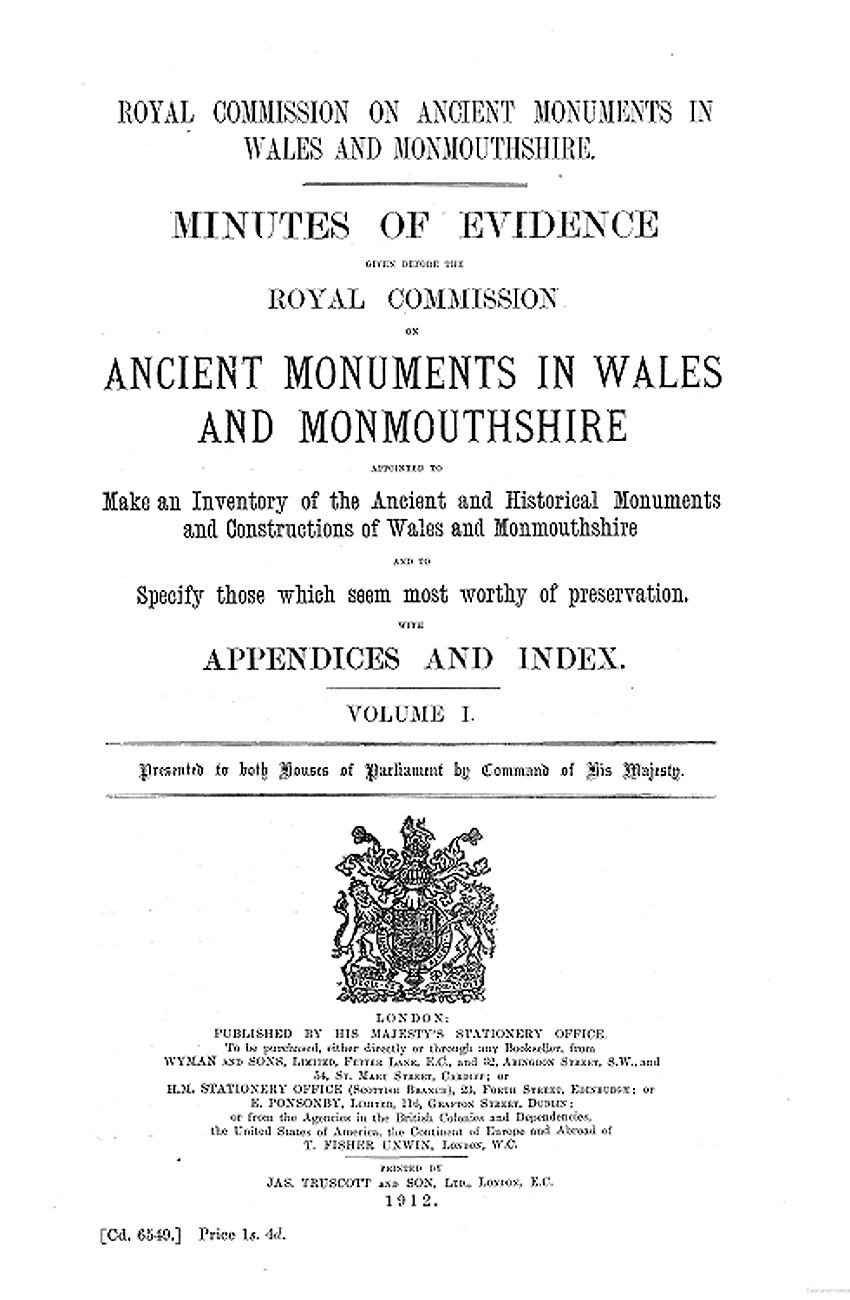 Buy eBook Now Minutes of Evidence given before the Royal Commission on Ancient Monuments in Wales and Monmouthshire at Google Play.

LIST OF WITNESSES EXAMINED BEFORE THE COMMISSION
MINUTES OF EVIDENCE
APPENDICES:-
‘Questions put to and replies of—
Mr. G. E. Robinson, Cardiff
Mr. G. A. Auden, M.D., E.S.A., Birmingham
Lists of Antiquities handed in by the Rev. John Griffith, Llangynwyd
Prehistoric Remains in the Rhondda District of co. Glamorgan.
Apparently undisturbed Tumuli.
Articles (” Grave-goods”) found in Tumuli excavated in the Rhondda District.
Human Remains found in Rhondda Tumuli.
Cists excavated in the Rhondda District.
Glamorgan Cromlechs, with their present condition.
Welsh Cromlechs, the orientation of which has been observed.
Stone Monuments in co. Glamorgan apparently connected with Cromlechs.
Standing Stones in co. Glamorgan examined by witness.
Stone Avenues in the Rhondda District.
Stone Circles in co. Glamorgan examined by witness.
Appendix by Mr. W. H. More, Crown Receiver of His Majesty’s Woods and Forests Department for Wales and Monmouthshire. An account of the work undertaken upon the Ruins of Tintern Abbey since the year 1902-3
Circular letter addressed to persons in the several counties believed to be interested in local antiquities
Circular letter addressed to the head teachers of the primary and secondary schools of the several counties
Circular letter addressed to the parochial clergy of the several counties
Syllabus of Information desired by the Commission under certain Heads and Interrogatories-
Circular letter to the County Councils of Wales and Monmouthshire drawing attention to the powers of the Councils under the Ancient Monuments Protection Act of 1900
Circular letter to the County Councils of Wales and Monmouthshire respecting the presence of Antiquities on land proposed to be acquired under the Small Holdings and Allotments Act, 1908
INDEX

LIST OF WITNESSES EXAMINED BEFORE THE COMMISSION.
(First to Tenth Days.)

Buy eBook Now Minutes of Evidence given before the Royal Commission on Ancient Monuments in Wales and Monmouthshire at Google Play.