CBHC / RCAHMW > News > Recreating the Past in Virtual Reality 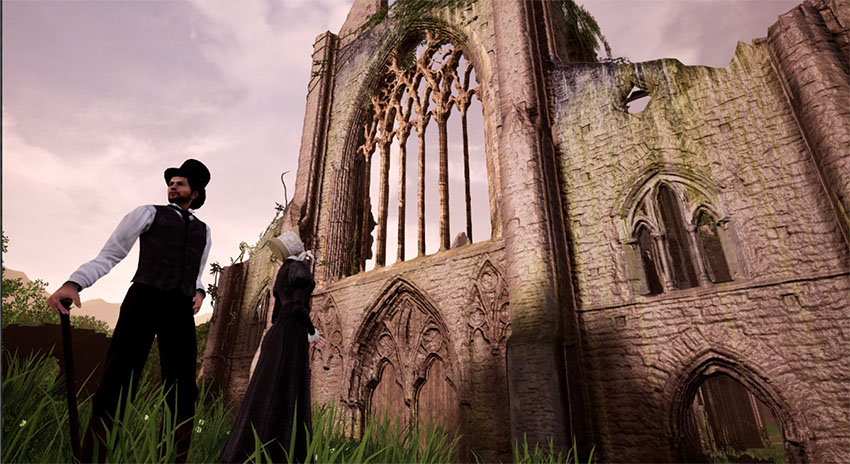 Recreating the Past in Virtual Reality

The level of accuracy captured by digital surveying techniques, such as laser scanning, enables the creation of accurate 3D digital models, but sometimes we want to use that accurate model as a basis for recreating a building as it may have looked in the past. In 2018, as part of an Arts and Humanities Research council funded project with Bangor University, the Centre for Advanced Welsh and Celtic Studies and ourselves, we recreated Tintern Abbey as it would have look in the first half of the nineteenth century.  The project used accounts written by continental visitors to Wales to create digital outputs to bring their accounts to life. The project funded Luminous to laser scan Tintern Abbey and undertake the 3D modelling of the abbey from that data. Informed by early photography and antiquarian drawings of the abbey, we then proceeded to put the ivy back on to the ruins and make it look more overgrown and untidier, much as it would have been in the first part of the nineteenth century. The next step was to place the model into a 3D environment that would allow the user to move around and explore, but in order to make the experience more immersive we also used virtual reality (VR).

A virtual reality headset means the user can move their head to look around in all directions and see the abbey at scale with a real feeling of height. It is then possible to move around the abbey, including to the top of the ruin and the virtual reality experience is so immersive that you can even feel you might fall off! Located around the abbey are some people in nineteenth-century clothing and information points which the user can open and then read further information about the site. These pages can be read in four different languages, English, Welsh, French and German reflecting the languages of the source material.

We now use the VR headset at public engagement events as way of showing how our survey data can be used and to introduce VR to a wider audience. The project website has different versions of the Tintern Abbey experience available, a short film giving a taste of what can be seen, and various other digital outputs such as Gigapixel photography and digital reconstructions.