US Coastguard personnel with church representatives, David James from the West Wales Maritime Heritage Society, and Simon Thomas from The Mission to Seafarers, Milford Haven.

On 23 September 2018, during the Sunday service at St Tyfie and St Faith church, Lamphey, representatives of the US Coastguard Service presented a special commemorative plaque to recognise the care of a grave of an unknown American seaman from the Great War.

The plaque, from the United States Coast Guard Chief Petty Officers Association and Coast Guard Enlisted Association, was received by Reverend Peter Jones and the church wardens on behalf of the local community.

The special regard felt locally for the unknown American seaman comes from recognition that the TAMPA was the largest naval combatant loss of life for the United States during the Great War.

The TAMPA was built for the United States Revenue Service by the Newport News Shipbuilding Company, Virginia. On 6 April 1917, when the United States declared war on Germany, the TAMPA was one of six Coast Guard cutters transferred to the Navy. After being fitted with heavier armament at the Boston Navy Yard, the vessel was assigned to Division 6 of the Atlantic Fleet Patrol Forces at Gibraltar with the mission to protect convoys from submarine attacks.

On 26 September 1918, the TAMPA was steaming alone towards Milford Haven to re-coal. The ship was torpedoed by UB 91 off the Devon coast and sank in just under three minutes. Those lost include 111 US Coast Guard personnel, four US Navy staff, a captain of the British Army (unconfirmed), ten seamen of the Royal Navy, and five British civilian dock workers.

After the tragedy, Admiral William S Sims, the senior US naval officer on duty in Great Britain, received the following message from the Lords of the British Admiralty:

‘Their Lordships desire me to express their deep regret at the loss of the USS Tampa.  Her record since she has been employed in European waters as an ocean escort to convoys has been remarkable.’

The TAMPA had steamed an average of 3566 miles a month without major mechanical breakdown whilst escorting 18 convoys comprising 350 vessels.

Of the two bodies washed ashore near Lamphey, the authorities were able to identify one as being Seaman James Marconnier Fleury, USCG. The other remains unidentified and still rests in Lamphey Churchyard.

To read more about the TAMPA and US Coast Guard Service follow these links:

The grave of the US Coast Guard’s unknown shipmate in the churchyard. 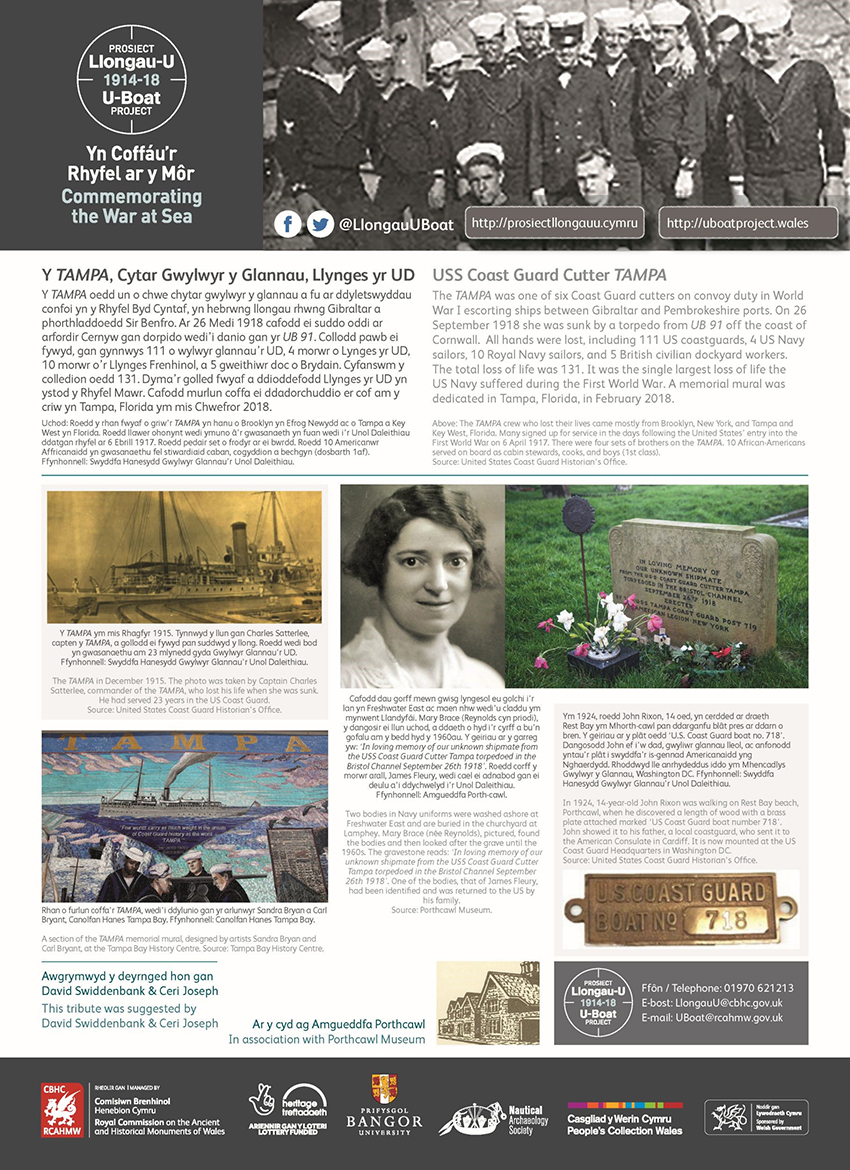 The loss of the TAMPA was the tribute chosen by Porthcawl Museum for the U-Boat Project 1914-18 exhibition. The panel can be seen now at Swansea Museum and will be on display at other various venues over the coming months. http://www.swanseamuseum.co.uk/whats-on/exhibitions

Sunk by German submarine U91 as described in my book SECRET NEWPORT.
After the Armistice in November 1918 U91 was surrendered at Harwich and put on display in Newport
, Cardiff and Port Talbot to raise money for war charities. Her deck gun was presented by King George V
to the town of Chepstow , Monmouthshire to form part of the war memorial .

Thanks for the comment Andrew. You can view our record for the deck gun on Coflein here: http://coflein.gov.uk/en/site/32858/details/deck-gun-from-german-uboat-ub91-chepstow-war-memorial-beaufort-square